Guitar hero to millions, member of a legendary rock band, adored by his numerous fans. He was always known for his boyish looks & ever ready smile for the cameras. Take a look at him now! It looks like Eddie Van Halen wants to audition for the position of Iron Maiden’s mascot who is also known as Eddie! From being known as a visionary in the field of rock guitar & music to being made fun of across numerous websites & tv & radio channels around the globe! Years & years of chain smoking (and cancer) and alcohol abuse can do wonders for your looks. I wouldn’t want to meet him in a dark alley!

It was announced recently that Eddie was entering himself into rehab, for unknown reasons. It is not known if the guitar legend will be able to attend his band’s induction into the Rock n’Roll Hall of Fame. 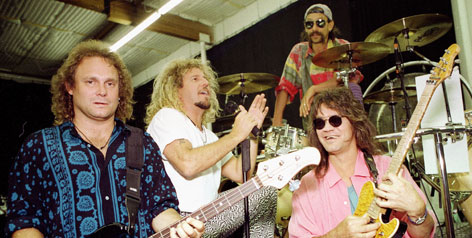 I don’t know when but I am looking for a phone to replace my current Motorola V3i and one of the options I am looking at is the above photographed Sony Ericsson W300i. Sony Ericsson has been the front runner in the market for mp3 walkman style cellphones. This one has a built in 20 mb space and memory card support of 256 MB. They are an attractive looking prospect with stylish clamshell designs. The handset will fit into your palm smoothly and you can open it with just one hand. The external display is monochrome with orange backlight colour. Ofcourse you have an mp3 player and radio capability as well (can keep upto 20 Radio Stations in memory). I don’t care much for their camera and I think it is low on quality. So I am not sure but by next month I will be changing my handset.