I got a shock today as soon as I reached the office – my colleague and buddy Akhil had gone back to Bangalore as he has taken ill. It seems he was quite unwell last evening and the cause was kidney stones! I used to tell that bugger that he was drinking way too little water. For a time people were scared as to what he had but a visit to the hospital confirmed the kidney stone. So he was sent home on a plane to Bangalore.

I arrived at the office and got the news, then had to start the work for the day. By afternoon, I had a light snack for lunch and continues my work, only stopping for some clarification that operations wanted and for a couple of coffee breaks. Between 3 & 4 & then 6 & 7 I had some feedback that needed to be given to the agents and I sent my report on the same just before I left the office. Some more work was needed but at the last moment it was decided to be skipped till the morning.

Funny thing, when you are in a hurry, does the bus actually listen to you? I needed to reach home as fast as possible, in 30 minutes if I could and I swear the trip home by bus went much faster than usual. Weird!

How many Drew Carey Show fans are out there? Not owning to the fact that he and I do have similarities in apperance (expect for the crew cut), this show and Drew Carey himself are among of my favourites on television. Among the many funny anecdotes and running jokes in this brillant comedy series, lies the total genuis idea of Buzz Beer. Buzz Beer was invented by the makers of the show (meaning Carey) – a Microbrewery beer first seen on episode No. 22 “Buzz Beer” (5/8/96) on the sitcom. When Drew Carey’s department store (Winferd Lauder) looked like it might be bought out by a Dutch company, he began brewing beer as a sideline to made extra money. He called his brew “Buzz Beer” – a coffee-flavored beverage (that cracked me up)- and placed it for sale around the Cleveland area especially at the Warsaw Tavern where Drew hung out. Other partners in the Buzz Beer venture included Drew’s close friends Lewis Kiniski (Ryan Stiles), Oswald Harvey (Dietrich Bader) and Kate O’Brien (Christa Miller). 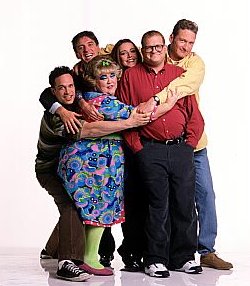 Initially they manufactured & bottled the coffee flavoured beer in Drew’s garage but the brewery was moved to Lewis and Oswald’s house. Eeach bottle of Buzz Beer contains 12 fluid oz (355ml) of beverage. The recipe for Buzz Beer is listed on its label: “Brewed from nature’s choicest Grain, Malt, Hops Yeats, coffee bean and water.” The word “Buzz” not only means that Buzz Beer gives you a “Buzz” when you drink it, but also that it’s the beer everyone’s talking about…as in “What’s the buzz?”

Motto & Mission Statement :
The motto of Buzz Beer is “Stay up and get drunk all over again!”.
Drew once jokingly noted that the original motto was going to be “This doesn’t suck.”
The mission statement that the initial four members decided on was 4 Friends, 4 Ever, 4 Beer.

Canadian-born England midfielder Owen Hargreaves is to move to EPL giants & winners of the just concluded season, Manchester United. In a move that was due to happen for a long time, his current club Bayern Munich have come to terms with Man Utd for a deal involving the holding midfielder, for around 17million pounds. Bayern are in the midst of their worst season in years, failing to qualify for the Champions League and finishing fourth in the German Bundesliga. Hargreaves missed most of the season with an injury and had requested for the transfer. It had seemed natural for the move to take place and he hopes to resurrect his career there. Other Bayern faithful are also leaving the club – Mehmet Scholl has retired from professional football, Hasan Salihamidzic has transferred to Juventus, while Ali Karimi & Claudio Pizzaro are also set to leave. This summer will be one of rebuilding for the German club.