Finland is a country in the Scandinavian part of Europe with a very small population of just a little over 5 million. According to the World Audit Democracy profile, Finland is the freest nation in the world in terms of civil liberties, freedom of the press, low corruption levels and political rights.[5] Finland is rated the sixth most peaceful country in the world by the Economist Intelligence Unit. The mother nation of Finns has given us so much, that I want to thank Finland for : 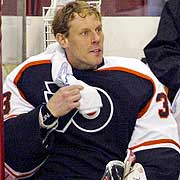 NHL goaltender Sean Burke officially retired Tuesday after nearly 20 years in the league. Burke spent last season with the Los Angeles Kings, and played for nine teams during his career, which also included playing for Canada in the 1988 Olympics. Selected 24th overall in the 1985 draft, Burke reached the NHL near the end of the 1987-88 season with the New Jersey Devils.

Holy crap! Steve Morse sitting on a chair & trying out new strings on a bunch of guitars is a whole lot more entertaining that most pop bands / artists.