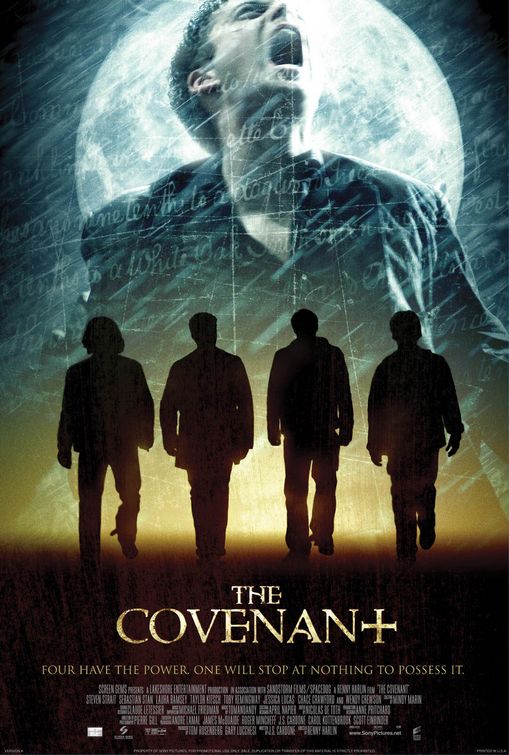 This is a movie that I read about in a movie blog review first and then downloaded via Veoh.com, a site that lets you download movies for free, after you install their application. The Covenant is about the Sons of Ipswich, descendants of wealthy colonists in Massachusetts. These families have untold powers that are passed down from father to son throughout generations. However one family’s greed for more, made the other four banish them, while the remaining four have based a covenant of secret. Problem happens when a descendant of the fifth comes seeking revenge. The four current sons of the families are Caleb Danvers, (Steven Strait), Pogue Parry (Taylor Kitsch), Reid Garwin (Toby Hemingway) & Tyler Simms (Chace Crawford). Sebastian Stan plays Chase Collins, the son of the fifth family, descendant of the Putnam family, through an illegimate ancestor and later adopted. He found out his true history through his real father and drunk with added power by way of his dad willing his own power to him before dying, Chase wants more. Using the powers too much, although addictive, makes their bodies weak and age much faster than normal. Caleb’s father was addicted to it and made his 44 year old body look older than 90!

The boys can levitate (they swing their jeep sky high and land behind a police car), move things with their minds and as Caleb demonstrates in a memorable scene, he puts his car back together after it is destroys in a crash with a truck. At a party thrown by the students of Spencer Academy, a dead student is discovered. At the party, newcomer Sarah Wenham (Laura Ramsey) is introduced to the boys by her roommate Kate (Jessica Lucas), who is Pogue’s long time girlfriend.

Also transfered to their school is Chase. Chase aligns himself with the 4 sons of Ipswich and hangs out with Kate & Sarah. But there is something odd about him. Sarah feels someone watching her while she showers in the dorm bathrooms but on investigation, only runs into Reid. While sleeping, she dreams about being covered in spiders, which is Chase using his powers over her. Caleb & Sarah being dating, while Pogue thinks that Chase is trying to steal Kate away. During a challenge swimming race between Chase & Caleb, the later sees the former’s eyes turn completely black, just like the quartets’ does when they use their powers. A distracted Caleb hits his head against the pool wall and blacks out, only to be rescued by Chase. 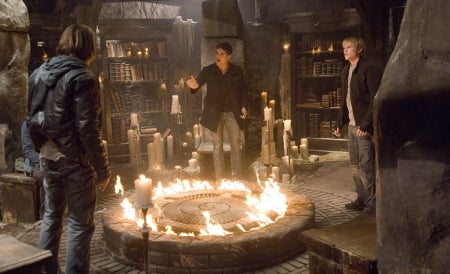 Caleb & Pogue steal into the school records at night and discover the truth about Chase’s lineage. When Pogue finds out that Chase used his powers to put a spell on Kate and that she is hospitalized, he rushes on his bike to hunt for Chase. He too is put under the spell by the more powerful Chase. When Sarah too is under the spell, Chase agrees to let them go in exchange for Caleb willing his power to Chase. That means death for Caleb just like it was for Chase’s father. In the final confrontation, as they battle each other using their powers, Caleb’s father wills his power to his son and he gets the upper hand and defeats Chase. Kate, Pogue & Sarah are able to come out of the spells immediately.

The movie also stars Stephen McHattie as Caleb’s dad, Wendy Crewson as Caleb’s mom & Kenneth Welsh as the school principle. A sequel is planned in 2008.

My nephew Adithya, the second son of my sister, was born on October 12th. My neice Geethanjali was born on October 16th. My sister & brother-in-law decided to kill two birds with one stone and hosted a large party for the two of them last night, the 14th. I wonder if at age 8 Adi minded it that much. He seemed to having a ball last night. And at just 363 days old, I doubt of Geethu knew what the entire fuss was about in the first place! In fact she spent the evening in a daze at all the noise, chat, laughter, food & drink around her!

I spent Sunday at home, online for most of the day, until it was 6 pm when I took a shower and got changed to go to Lotus Club, where the event was happening. I wasn’t in a very party going mood with all the things that have been on my mind and nearly decided to call in sick or something, buy myself a packet of instant noodles & a bottle of 7up and curl in front of the tv. But go I did and I reached there by 7:15. Rakesh was the first person I saw and it was nice getting to spend some time with him after two + years. The birthday girl was just arriving to the venue, having just woken up from a long nap.

I spent the evening with Arun, Kannanchettan & Rakesh as we drank glasses & glasses of beer. There were lots to eat – beef, spicy poppadom, french fries, meat balls, onion pakoda (which was the best) and a salad. Many had brandy but I only wanted beer. There was a nice tasty dinner also waiting, which we ate only at 10 pm. Raju came and joined us by 8 and Suraj, his wife & new born son came by 9 pm. That was the first time that I was seeing baby Atma Madhav Nair …. and he had a cold & a tummy upset.

By 10:30 pm I was at home; Arun dropped me on his bike. I was glad that I had gone to the party but I had way, way too much beer. I fell asleep with the lights all on and woke up at 4 am feeling queasy and tired.

I’ve been a fan of Jason Priestly for many years, ever since they started showing 90210 on cable in India in, what was it 1991-92. I can’t remember, but it seems like a long time ago. I’ve seen Jason in a few films like Calender Girl & The Highwayman plus in the tv series Tru Calling which was much more recent.

Other than acting he is also a director, having directed The Highwayman among others. He also directed the music video for the Barenaked Ladies’ The Old Apartment and was instrumental in making the band a success in the US. He also directed a documentary about being on the road with BNL in the US titled Barenaked In America.

Here he is on the CBC talk show The Hour talking to host George Stroumboulopoulos about his new documentary film on another Canadian band, this time it’s about country-rock trio The Road Hammers (featuring Jason McCoy) trying to make it big in Nashville and the US.