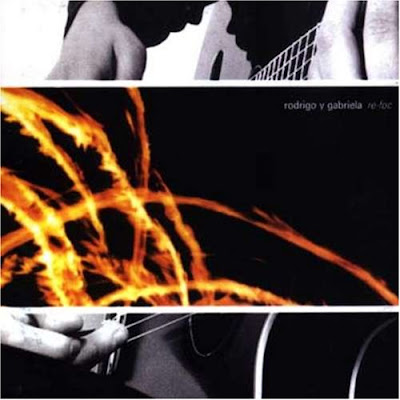 Foc was the debut album of flamenco-rock guitar duo Rodrigo Y Gabriella, a blend of latin, rock, metal, jazz, classical & funk performed by just two people with a guitar each. The album title is Foc, the Catalan word for fire, intense and smoldering, just like the duo when they trade guitar licks with one another. The duo started busking on the streets of Mexico, their native land, and then moved to Ireland and earned a reputation as a must see act. was homage to the people and places they encountered on their travels with titles ranging from English, Danish, Spanish and Catalan. You have tracks like One, which is a Metallica cover. The duo are huge fans of Metallica and this isn’t the only song that they have covered, with great aplomb.

You have the ballad 30 de Marzo and Paris which are a diversion from their usual frentic pace of guitar solos & riffs as their fingers glide across the fretboards in a more relaxed manner. Foc & Diem are standout tracks for me, as is Temple Bar. Georges Street The Tartar Frigate, New One & Take 5 round out this album, which only disappoints in the short duration. Otherwise, its a fun album. So much for the slump, Ottawa played at their very best to scorch 6 goals past the Carolina Hurricanes in an away match. After losing 7 games in a row, the Sens have now won 3 on the road. The team leading the East went to a 2 goal lead within 6 minutes, Dany Heatley & Mike Fisher scoring less than 5 minutes apart. Jason Spezza also scored in the 1st period. Heatley added a second goal in the 3rd period, his 15th overall goal sandwiched between the scores by Shean Donavon and Dean McAmmond. Spezza also had 2 assists.

download black snake moan In goal Ray Emery saved one shot before injuring his hip and was replaced by Martin Gerber. The former Hurricanes goalie saved 31 shots to complete the shut out for Ottawa. Tomorrow the Sens play Pittsburgh.