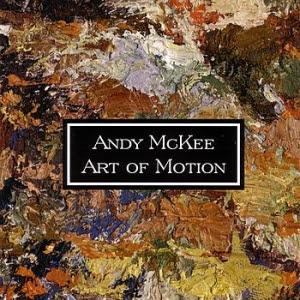 Finger style guitar instrumentals is a genre of music to which I am quite new, having been exposed to it in limited doses last year through the music of Don Ross. From there I explored a couple of other guitar players whose live videos have been made popular on Youtube through the millions of acoustic guitar aficionados all over the globe. Especially Antoine Dufour and the gentleman whose album I am reviewing here tonight – Andy McKee. The Kansas based guitar whiz has been influenced by rock & metal guitarists as well as acoustic finger stylists as well. His wonderful tone & melodies have been featured on 4 solo albums, one dvd (with Dufour) and a duet album with Ross. After Nocturne in 2001 & Dreamcather in 2004, McKee came out with his flagship album Art Of Motion in 2005. Most of the songs from this cd are featured & popular on Youtube.

The title track starts off the cd and is describe to be about energy and movement. When She Cries is about the feeling of being unable to take away someone’s pain even though you badly want to. Drifting is up next and judging by the almost 18 million hits it has reived in Youtube, this is his most popular songs. And not without reason. Andy wanted to capture the feeling of not knowing where he was going when he dropped out of studies to play guitar full time. That uncertainty and hope is obvious in the music. For My Father is for the dad who supported him even though he wasn’t happy about his son dropping out of high school. And of the pride he felt watching his son perform all over the world. McKee’s father passed away in May 2005 due to cancer.

Practice Is Perfect is a concept learnt through his fascination of Buddhism. Shanghai was written sitting in a hotel room in China, while on a break during a tour there. Into The Ocean is about seeing the ocean for the first time from the point of view of a person who has lived most of his life in a land locked area. Nocturne is about the quite reflection during night time, when most people are sleeping. Heather’s Song is written on a baritone electric guitar and named after his sister. Samus’s Stardrive is based on playing video games. Keys To The Hovercraft is inspired by futuristic books about cars & bikes during his childhood. Rylynn is dedicated to Rylynn Coffman, a young girl as lovely and unique as her name who came and went through this world so quickly.

Finger style is a genre which must be watched to fully appreciate the intricate art but for most fans like me, listening to it is good enough in itself. Still for newcomers to this style of guitar playing, I suggest you watch the below video of Andy playing Drifting and become an instant fan of his music.

harper movie Sometime I wonder what the heck am I doing in this job. Arguments, let-downs, fighting every month for what is an essential right & a basic activity of my team with the idiots who push excel sheets in front of management’s face and brighten it by highlighting numbers. And management listens to the fucking tone of the “ka-ching” and any and all manipulations to squeeze some more money. That’s it!

watch out of the past online

I am so tired today, mentally more than physically, after the absurd chase to work on a silly & stupid project that the clients somehow always seem to drop onto our laps. It’s so far away from what my actual role & job is that I feel like they are taking advantage of me. And they are so idiotic that a lot of changes have been made since the original download that it looks a whole lot of mess. Ofcourse me & my counterparts in other states have to clean up the mess and ensure that it happens and that it happens well. And ofcourse if it doesn’t go well, guess who will be blamed for it despite the fact that they have fucked around with the details to fit their stupid whims and fancies?