Ladies & Gentlemen! Lo & behold, a new GnR album, Chinese Democracy, is finally upon us. Their first album since 1993’s all covers album and their first album of original material since 1991’s twin cd Use Your Illusion I & II is here. I got an mp3 version of it within the same day. It’s finally here. Remember 1991-92 when GnR was all the rage and everyone & their granny played songs like November Rain & Estranged? That might be hard to replicate but it just feels good to hear Axl screaming & screeching on these 14 songs, once again thumbing his nose at anything that pisses him off. The image that you see on the left – I don’t know but it seems like they have 3 or 4 album covers for this cd. Could I be wrong? I can’t be sure but I like this one the best and so it stays as the official image for the record. So let’s get on with it; a review of the album that took it’s own sweet time to get here. And about time too!

The cd sets off with Chinese Democracy, the title track and the first single released. Many fans have already heard the track either at one of their concerts or online. It cracks like a whip and stings you right in the face. Inspired by watching a movie about the Dalai Lama, this track criticizes the Chinese government’s treatment of it’s people. From there we move on to Shackler’s Revenge, starting off like a hip-hop blast. Is this actually a GnR record? Lyrically it’s about being pissed off and not wanting to be comforted. Better is the second single and is probably one of the best tracks, a love tragedy and about being alone. Street Of Dreams reminds me of Yesterdays in parts but the song is about longing and wanting the lover. The piano playing of Dizzy Reed is excellent here.

Next track, If You Want Me, seems so odd on a GnR track, I was like “what the fuck”? It features an artist known as Mase (damned if I know who the fuck that is) and it’s so weird to hear Axl singing this song. But nice guitar solo in here. There Was A Time is about the effects of the drug culture taking it’s toll on a person. Axl sings that there was a time when he would have done anything for this person but things change. Catcher In The Rye is a refrence to the famous book by J D Salinger and possibly also to Mark Chapman, John Lennon’s killer, who happened to be reading the book when he was arrested. Scarped sounds silly with it’s “ayaho” chant in chorus, telling the world to get out of their way.

Axl does more of “ahha” screams in the next song, Riyad And The Bedouins which is rumoured to be about 911. Sorry sounds so weird coming from GnR but I wonder if it’s the influence of all the new musicians. Or is Axl apologizing for the new style of music? The lyrics seems to be meant to antogonize someone. IRS is telling you that is no escaping from Axl; he will dog you till the very end. Ok, what is a title like Madagascar doing on a GnR album? It references a few movies. This I Love could very well be their smash hit ballad from this album if they pacakage it well with a suitable video to boot. Wonderful piano fills this song. We complete the album with Prostitute.

Ok, so they aren’t the GnR of old and with so many new members you can’t expect it to be so. Only Axl remains of the original 5 and only Dizzy remains from any of the previous albums. The guitar work of former member Buckehead, Ron Bumblefoot Thal, Richard Fortus, Paul Tobias & Robin Finck shine on certain tracks – but that’s what Axl had to do? Get a wall of guitars, an attacking 5 like a hockey lineup to replace what Slash & Izzy Stradlin did with ease (and Gilby Clarke in live shows for a few years)! You still think as to what this could have been, all those wasted years, Axl becoming a joke in music circles and all that negative jazz. Still, it’s got some golden moments. I’d rate it 3 out of 5 stars. And here’s a live performance of Better. 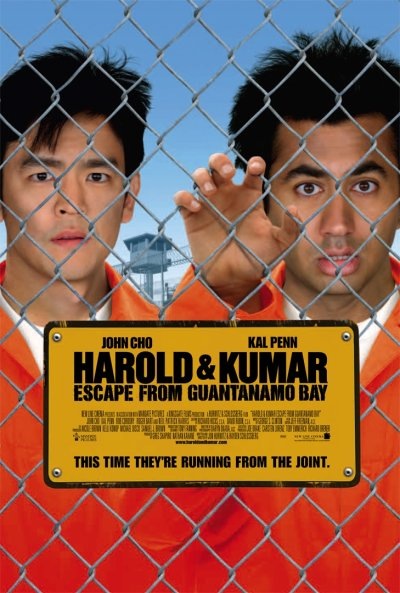 The world’s favourite Asian-American stoner dudes return for a sequel entitled Harold & Kumar Escape From Guantanamo Bay. You just know that Kumar is behind the problem that they have. Ok, so it’s actually 4 years since the duo’s first movie but in this film, it’s mere minutes after the end of the first. As we know Maria is leaving for a trip to Amsterdam and Harold & Kumar have just got back from White Castle. As the movie starts, we see Harold dreaming about Maria while taking a shower to get rid of the dirt during the previous night’s activities. However he is rudely interrupted by Kumar, who is noisly taking a dump after eating all those 30 burgers. The two decide to go to Amsterdam and join Maria, while also taking in the pleasures of legal weed that the nation of Holland can provide them. Before they board the flight they run into Kumar’s ex Vanessa and her fiance Colton, who has connection in political circles. On the plane an old lady mistakes the bong that Kumar tries to light up to be a bomb and alerts the air marshalls in the plane. So…our boys are arrested and after an interrogation by a neurotic Ron Fox (Under Secretary of Homeland Security, played by Rob Coddry) they are put in orange jumpsuits and sent to Guantanamo Bay. They managed to escape the jail and avoid having a ‘cock meat sandwich’ and make their way back to the US in a boat.

What follows next is odd & funny situations that only M/s Lee & Patel can get themselves into. They go to meet a friend who has a bottomless party in his palatial place (lots of bare women’s butts on display) and get a car from him. There’s the Southern couple who have an inbred son and who take the pair into their house. Running away from their one-eyed son, the duo find themselves smack down in the center of a Ku Klux Klan’s bonfire. Running from the Klan, they flag a car only to find that it’s driven by a mushroom eating Neil Patrick Harris. He offers to take them to Texas to meet Colton who they think can help them with his connections. But ofcourse, NPH has to stop at a Texas brothel and have sex with the bustiest whore in there.

Kumar takes two hot whores into a room, where he asks them to make out and then they strip him. However he starts to cry about Vanessa while they comfort him. Harold sits and has coffee with the rest of the whores, until NHP brands the big, busty whore with an iron rod on the ass. In the skirmish that follows, NHP is shot dead by the brothel madam. The pair make it to Colton’s Texas house but he turns them in to the authorities. In a struggle on the plane, Harold & Kumar jump in a shute and land in President Bush’s Texas home, where they bond over excellent grass! Bush pardons the two and the guys crash the wedding and beat up Colton. Vanessa is convinced that Kumar really loves her and she leaves with him & Harold. The three of them make their way to Amsterdam where they find Maria and they have a jolly old time in that city.

It’s fun, it’s silly, there’s a bunch of tits & asses on display. James Adomin looks enough like George W to poke a few cracks at the moron Prez. The girls are beautiful, there’e enough laughs in it, although it won’t do as well as the original. But I enjoyed watching it and so will you if you don’t mind the stoner frat boy sense of humour.

Well I stayed in home today and watched the last 25 minutes of 23 in the morning. I woke up only by 9 am and had breakfast just at 11 am as I was a little put off by the weather. It was cool for sometime and then cloudy and a little hot a bit later. The sun has been hiding all day amongst the clouds, that cowardly son-of-a-bitch. I kept thinking, “it’s going to rain any minute, it’s going to rain any minute” and it never did. The day has looked so gloomy and I think that ruined my mood for the day, despite it being a rare 2 day off from work.

I heated up some leftover breakfast stuff (a little upma & kadala curry) and tosted a couple of slices of bread to have my late breakfast. Lunch was a miserable looking rice + old curry which had no taste and it was only the onions & tomoatoes that I chopped up and mixed to the concoction that enabled me to eat it at around 2:30 pm. There was some payasam that a neighbour had dropped off a day ago that I had as desert but it tasted funny.

While having lunch I watched the new X-Files : I Want To Believe movie that I bought last afternoon. That’s 3 movies in the space of 24-26 hours that I have watched. It was a total dissappointment as I will review in an upcoming post. I think they lost the plot somewhere. But it’s getting a lot hotter now and as I sip my hot coffee, I’m starting to sweat a bit. Maybe a shower before dinner will cheer me up but I really do hate this weather.