The only bad thing about this movie is the title – it reminds me of an album by Oasis, who I cannot stand!

Anyway, with a good story and a wonderful cast, how can this movie miss? The film stars Ryan Reynolds as Will Hayes, a 38 year old about to be divorced father of a precocious 8 year old daughter. After she begs him to, he tells her the story of his love life, featuring the 3 women who he has loved – one of whom is his soon to be ex and his daughter’s (Abigail Breslin) mom. He changes the names of the women with the exception of April, the woman he still pines for. Will was a speech writer for the Clinton campagin in 1992 and met April (Isla Fisher) there. He had left behind his college sweetheart Emily (Elizabeth Banks) in his hometown in Wisconsin to work in New York.

The 3rd woman was Summer (Rachel Weisz) an authour and briefly Emily’s lesbian lover as well. Will falls in love with each of the women at different stages of his life. Emily turns down his marriage proposal after saying that she slept with his college roommate as she knew that both Will and her were on different paths in life. He becomes close friends with April and becomes involved with Summer. However he has a falling out with Summer when she writes a scathing expose on his boss which effectively ends the boss’s political career and Will’s life as a campagin consultant.

Drunk and disillusioned with life after that and when the Lewinsky scandal breaks out, he turns to alcohol and drinks himself into a stupor. On his birthday, while at a party arranged by his friends, he realizes that he loves April but ends up insulting her. He is upset that she is dating someone and loses touch with her soon. At a party a few years later, he reunites with Emily who he later marries and has a daughter with.

Towards the end of the story his daughter understands that her father still loves April and encourages him to seek her out. He does and after some difficulty she is convinced that he is the one for her. She invites father & daughter into her house.

Well Ottawa seems to be getting in their stride of late. On the 10th the Sens welcomed the Atlanta Thrashers and came out 4-2 winners. Mike Fisher had a goal and an assist. Alexie Kovalev, Chris Neil & Jarko Ruutu also scored and goalie Brian Elliot made 27 saves.

Two days later however, the Pittsburgh Penguins came calling and handed us a 4-1 defeat. Milan Michalek got his first Ottawa goal to open the scoring 15:59 in. Pascal Leclaire made 24 saves as the Senators (3-2-0) ended a three-game winning streak. On the 15th, Michalek registered his first three-goal game in the NHL, including a pair of shorthanded tallies, to spark Ottawa to a 7-1 victory over the Tampa Bay Lightning at Scotiabank Place.

Kovalev, Alexandre Picard, Nick Foligno and Ruutu also scored for the first-place Senators (4-2-0), who leaped back over the idle Buffalo Sabres in the Northeast Division. Goalie Leclaire had a relatively easy night, facing just 17 shots and stopping 16 of them. The highlight of that game is shown below. And just last night, Kovalev scored a goal and had an assist against the team he had played for from 2004-09 – the Montreal Canadiens. The Sens scored a goal in each period to win 31, with Neil & Daniel Alfredsson scoring the other two. Caramel Macchiato w/ whipped cream, in a cozy cafe, wifi access and a laptop. What else would you need? 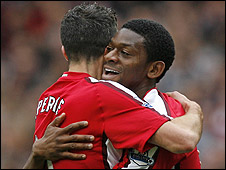 Arsenal continue their winning ways and thrilling their fans. The Arsenal engine was purring perfectly early on and after 16 minutes, Robin van Persie celebrated the birth of his daughter this week with his fifth goal of the season. Followed by that lovely goal, Abou Diaby grabbed another almost immediately.

However Lee Bowyer plundered a goal seven minutes before the break despite Arsenal claiming a foul on Vito Mannone in the build-up. The visitors then tried to build on that goal and make a good challenge for the match but Arsenal had to thank the Italian goalie for a crucial save late on and could only breathe easily after Andrey Arshavin curled home a low shot from the edge of the area with five minutes remaining.