This is probably going to be the least popular Seth Rogen movie. An obscenity laced film, Observe And Report is a poorer cousin of Paul Blart : Mall Cop. The two movies were made around the same time and have similar themes – a shopping mall security cop who has dreams of being a real cop. But it fails to be half as charming as Mall Cop.

The Lonely End Of The Rink is a hockey themed song by the Tragically Hip. 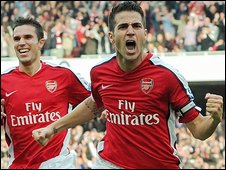 Every season Gunners fans always look forward to the games against Manchester United, Liverpool & Chelsea but there’s nothing like a good old north London derby. Tottenham Hotspurs came calling yesterday and were sent back with a 3-0 defeat.

The game turned inside 11 seconds shortly before the interval as the Gunners struck twice to set up a victory that gave manager Arsene Wenger 1000 Premier League points since his arrival at the club in 1996. Robin van Persie reacted quicker than Ledley King to meet Bacary Sagna’s cross in the 42nd minute, but Spurs keeper Heurelho Gomes should have done much better than fumble the ball over the line.

And worse was to follow for the visitors straight from the kick-off when Wilson Palacios gifted possession to Cesc Fabregas, who ran through the heart of a static defence to beat Gomes. Referee Mark Clattenburg played a clever advantage after Benoit Assou-Ekotto had fouled Eduardo and, while Spurs inexplicably waited for a whistle that was never going to come, Sagna set up Van Persie for his second from eight yards.