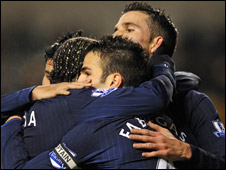 Arsenal’s good form continues as do the wins and the goals. Post another fine display to dismantle Wolverhampton, Arsene Wenger’s side moves into second place in the Premier League.

The Gunners were a touch fortunate with their opener as Ronald Zubar turned a Cesc Fabregas corner into his own goal. And Eduardo’s chip went in off Jody Craddock’s head to make it 2-0 before Robin van Persie’s exquisite touch set up Fabregas to score a classy third. Andrey Arshavin struck with a low shot from the edge of the area before Craddock headed in a late consolation.

Two days ago, I had planned to go out with my friends Anil & Madhu today. It had been a while since I had a chance to hang out with the two of them and if we’re not careful, our meetings will become so far apart and months will pass in between us seeing the others. Unfortunately, although everything was planned as of latel last night, Madhu had to cancel at the last moment due to family reasons. Being the only married man among the 3 of us does have it’s effects on him.

Madhu sent me an sms early this morning; I read it first thing as I woke up at a little past 8 am. So Anil and I have decided to call it off for the time being and wait for another chance, possibly next Sunday. So did I want to go out on my own for the day, get some coffee and read in the cafe and possible then go get a few drinks while I ate a late lunch?

The day was just about cold (hasn’t actually rained in my area but some other parts of Cochin has got some rain) and lazy enough for me to not bother taking a shower and get dressed. I instead opted for black coffee, lying on my bed and watching lots of Youtube music videos. By 12:30 I was watching Deep Space 9 and Voyager episodes that I had recently downloaded. By the time I was done with that it was 6 pm. That’s pretty much most of my Sunday. Now for some music. latte leaves falling from the sky originally uploaded in Flickr by askew.