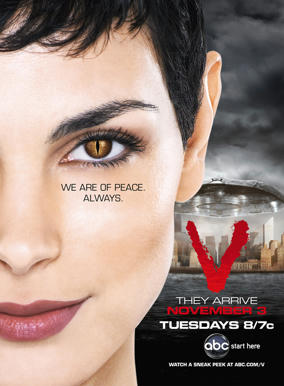 Long awaited and highly anticipated, the pilot episode of the new V (or V 2009 to distinguish it from the original one) was originally aired on November 3rd on ABC in the US. Although the basis is the same, let’s face it, the 2009 version is going to be a lot different than the 1980s version. For one, it’s going to be affected by the phenomenon that I call Battlestar Galactica-ism. Less actual Sci-fi and more drama. The aliens are too like us – Anna wear suits that look very North American, the whole look of the visitors is very much human.

Also it suffers from the controvesy of being an allegory of the Obamamania – the use of phrases present in the series (such as “hope”, “change”, and “Universal Health Care” being offered by the Visitors) have riled some of the President’s supporters. And although I liked the episode, I gotta say this – it feels too rushed! There’s not enough time given for the arrival of the visitors to sink in. The deception and their true intentions are arrived at so quickly. It really takes a mini-series to get to such conclusions, like the original did so well.

Positives – Morena Baccarin as the vistor leader Anna, is super sexy – she’ll make a great villain. And boy does she have super hot & long legs! I think Joel Gretsch is a good choice; he sure is a Sci-fi guy. And Laura Vandervoot is so beautiful & sexy. The ships are very futuristic. I was so happy to see Alan Tudyk (Serenity, Firefly) as a visitor posing as an FBI agent and the partner of lead heroine Elizabeth Mitchell. Not happy about the fact that he is killed towards the end of the episode.

So there you have it; the aliens come to our planet on 29 huge motherships, they claim to come in peace and offer us greater technology, but it transpires that they have been infiltrating the planet for decades, and are planning on enslaving the human species. The beginings of a resistance movement is sowed when Father Jack & Erica, after escaping a visitor attack, plan the next move. A young ambassor program by the visitors recruit culpable humans into their plans.

They are reptiles in fake human skin. They are here to enslave us and take over our planet’s resources. You do not know whom to trust.