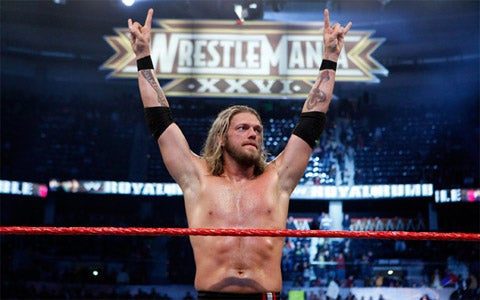 Alright, nice way to make a comeback. I don’t usually get to watch much tv these days and get to watch WWE wrestling once in a blue moon, so this evening when I just switched on the tv and I saw that they were broadcasting the Royal Rumble event – I thought I’ll sit me down and watch it. Adam Copeland aka Edge came back from a long absence to win the Royal Rumble. He was last seen on July 3rd, where in a match against Jeff Hardy, his Achilles tendon tore and he had to undergo surgery.

At the time, it was reported that he would have to miss upto a year of wrestling but surprise, surprise, the roof came down on the crowd at the Atlanta venue as Edge walked in at the number 29th spot of the Rumble. To massive ovation, Edge jumped in and eliminated Chris Jericho and survived elimination a couple of times before dodging John Cena’s rush which turned into an elimination dive over the top ropes for the rap reject.

Edge must have turned into a ‘face’ as the crowd stood on it’s feet and cheered the returning Rated R superstar, who earned a championship opportunity of his choosing at Wrestlemania XXVI.