I’ve become very much a recluse when it comes to family gatherings. Somehow I just don’t find any motivation to go and visit or meet up with family these days. I do wish the best for my relatives, well a couple of names might be excluded from that list, and I do like meeting my cousins but the thought of spending a few hours in a house, hall, apartment or club is just too taxing for me.

I wonder how & why that happened. I don’t know but have some theories on it. I feel that I am being judged, discussed about  behind my back and maybe even dismissed as a wash out by a section of the family. I could care less but I don’t want to give them the opportunity if that is the case. I hate the inevitable dull & boring questions and probing into my life which is not genuine concern or the eagerness to know more about you – it’s to compare and later criticize.

My cousin  brother is getting married on the coming Sunday, a fact which I almost forgot, and I am also invited to spend Saturday evening at their house as well. Although I am fond of my cousin and haven’t seen him in a couple of years, I do not look forward in anticipation at the thought of spending all that time with others. Perhaps if the gathering were smaller I might be cool with it. But weddings are so…..hot and sweaty and there’s too many people and kids running about and the probing and the questions and the talk.

Oh the talk! If the members of this extended family is best at anything it’s to talk your head off. Insensate, mindless, nerve wrecking chatter that borders on delusion, thoughts of wishful grandeur, irritating and boring in some cases. I dunno, I guess I have to go but I wish I could get outta it.

On another note – Happy Birthday Manoj! 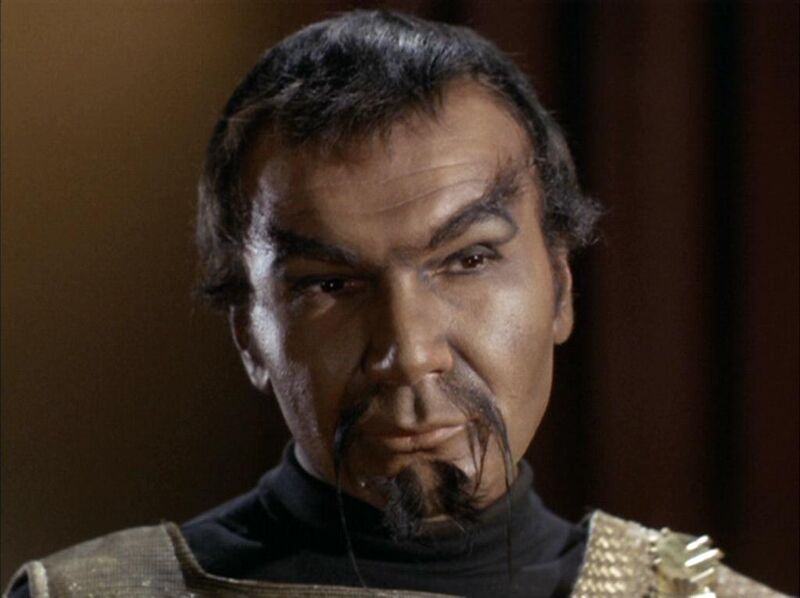 In my mind, Klingons were the best possible villains, except for the Borg ofcourse, for Star Trek. Maybe villains is too strong a word – anti-heroes is more appropriate I think. Brutish, courageous, warrior like, proud and honour-minded – they have some good qualities in them. They along with the Romulans were the strongest antagonists in The Original Series. Ofcourse by 1987 and the era of TNG, they were allies and part of the Federation and newer villains took over. However, I always liked the Klingons when they locked horns with Starfleet’s finest.

Today I watched the first episode to feature Klingons – Errand Of Mercy. The Klingon leader in this episode is Commander Kor – played by the late stage & television actor John Colicos. Colicos fashioned the look of the Klingons after Ghengis Khan – long mustaches with an oriental/Mongol look. As you can see here, the famed forehead ridges that we have known to feature on Klingons were not added to the fictional race at this time. But Kor still is menacing with his superiority complex and his rage.

Kos captures the neutral & seemingly primitive planet of Oraganos in Errand of Mercy and clashes with Captain Kirk & Spock. His plans to execute the two of them is spoiled by the Organians, who halt the war between the Klingons and the Federation by use of their superior powers, much to the surprise of Kor & Kirk, who thought that the race was a much technologically inferior one.

Colicos did a fine job then and in 3 episodes of DS9, where he played an older Kor. The Shakespearean actor died in 2000. Ofcourse he was more famous as the evil Balthar who sold humanity to the Cylons in the original Battlestar Galactica. Colicos’s portrayal of Balthar is, in my opinion, miles ahead of the bumbling English man in the new BSG. He was pure evil, greedy and manipulative and thoroughly enjoyable to watch.