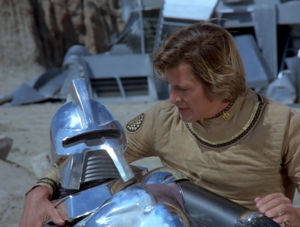 Recently I started watching the original Battlestar Galactica all over again and had also started downloading Galactica 1980 – the inexpensive and inferior spinoff to the 1978 series. Also as I have probably mentioned, I recently got a copy of the entire 4 seasons of the new BSG. But my favourite and sentimentally attached episode is from the 1980 10 series season. It’s called The Return Of Starbuck and it blows everything else off just because of the storyline.

In it, the mysterious Dr. Zee’s origins are explained; he is the one telling Cdr. Adama about a dream he had, which is actually a true story. Starbuck & Boomer are battling a bunch of Cylon raiders and although they destroy all but one (which is damaged and crashes on a planet), the mood is not celebratory. This is due to the fact that Sarbuck’s viper is also hit and he cannot make it back to the ship. The only option is for him to either drift off and die or try to land. Boomer goes back to Galatica, which is plagued by attacking cylon raiders. He pleads to Adama for help in saving Starbuck but understands when the patriarch states that they cannot go back, even if Adama wanted to so badly. Starbuck is lost to the rest of the fleet.

The warrior lands on an uninhabited planet and is alive but has barely enough rations to last a few days. He has accepted his fate and searches for a makeshift shelter. He then see something that startles him, something he never expected – the damaged cylon raider lies crashed on a plain. Cautions, Starbuck approaches the wreckage with his weapon raised but he needn’t worry – the three cylons are all damaged an out of power. Lonely and desperate for companionship, Starbuck sets off to repair one of the cylon, using parts from the other two and powering it with the raider’s generator. Once activated, the cylon tries to attack the colonial warrior, but the latter manages to convince his enemy that they both need each other and co-exist in this planet as they are the only inhabitants. ‘Cy’ as Starbuck christens the Cylon, is then taught about humans, their way of life and also a game of cards called pyramids.

However, soon it is obvious that Starbuck needs human companionship, female in particular. Cy gets “offended” when Starbuck changes the rules of pyramid in order to keep himself amused. He says that he will find Starbuck a female companion and leaves into the freezing cold night. Starbuck waits and hopes that Cy hasn’t hurt himself in the poor light but is astonished when the cylon brings back a pregnant female human who is unconscious. This woman, who Starbuck takes care of, delivers a baby boy in a few days. She then tells Starbuck that the cylons will be coming soon, attracted by the distress beacon that the damaged raider had automatically soon. With Cy’s help, Starbuck constructs a one seater shuttle, taking parts from his damaged cockpit and the raider. Soon three cylons arrive and while the woman is safely sent off in the shuttle with her baby, Starbuck faces off against the three centurions.

Cy arrives with his weapon repaired and shoots 2 of the cylons dead; but the third one damages Cy with a shot. Sarbuck kills the 3rd cylon and rushes to the aid of his friend. The dying cylon pledges his friendship to Starbuck, till now never acknowledging it and dies out. Starbuck cannot repair him and settles for life alone on the planet. The baby reached Galatica safely, but his mother has vanished. The baby turns out to be Dr. Zee and the mother is a higher being sent to ‘judge’ Starbuck and deems him to be worthy & good. The script for an unfilmed sequel to this episode, as the series was canceled, lets us know that Starbuck is eventually rescued from the planet by the Seraphs, the inhabitants of the Ship of Lights, of which Angela, the baby’s mother, was one. The entire affair had been set up by the Seraphs as a test of Starbuck’s worthiness to join them.

This episode has always remained strong in my mind and been the epitome of loneliness, atleast to me. As such it is one of the most nostalgic memories of my childhood – I was 5 when this episode originally aired and probably 7 or 8 when I first watched it – and is a perennial favourite of mine. You will agree if you have seen it.