But the lure of the food aside, I would like books & movies more because I’d be entertained at the same time as I’d be doing my job. And I’d be a polite and sweet critic; I’d be more Paula Abdul than Simon Cowell. What I do know is that I won’t be Randy and keep saying “hot” and “dawg” all the time. So yeah books & movies is what I’d like to do more off. Only thing is that I do not read as much as I used to and blame it on the internet cause I spend almost all my free time on it and then there’s movies & tv series galore to watch. So that would mean that movies & tv series would be my first pick, books next and food third.

I find it funny to see wine tastes go all snobby about certain wines and the way they taste the wines and then spit the damn thing out. Even if it is a good wine! Beer tasting & beer critics seem so much more relaxed and down to earth. Yeah I’d like that job. Roshan the beer critic. International burper extraordinaire. Send me your ales, lagers & your porters. It’s beertastically fantastically great. 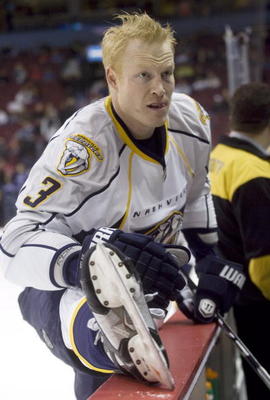 The sport of ice hockey is spinning with the news of another death hitting the internet, radio & tvs. And guess what? It’s another enforcer.

Wade Belak who retired earlier this year from the NHL as a hockey player after being placed on waivers by the Nashville Predators was found dead in his Toronto condo yesterday. Reports are that it looks like a suicide. He was 35. Going unclaimed, Belak was assigned to the Predators AHL affiliate, the Milwaukee Admirals, but decided on March 8, 2011 to retire and remain with the Predators in an organizational role.

Born in 1976 in Saskatoon, Belak began his NHL career in 1996 with the Colorado Avalanche, played three years with the Calgary Flames and spent seven seasons as a member of the Toronto Maple Leafs. He played two years with the Florida Panthers and had been with the Nashville Predators since 2008. Known more for using his fists than stick-handling, the 6-foot-5, 223-pounder, played 549 NHL games, scoring eight goals and 33 points, racking up 1,263 penalty minutes.

He leaves behind his wife Jennifer, young daughters Andie Marie & Alex Grace. You never know what the real reasons are unless he has left behind a note or an email. But it doesn’t seem like he had to take his life. Enforcers always seem to get depressed once their time playing is up. It is such a shame. And he was my age! Off the ice, the Toronto media portrayed Belak as a charismatic, easy-going person who loves to joke, contrary to his aggressive style of play. Rest in peace Wade.