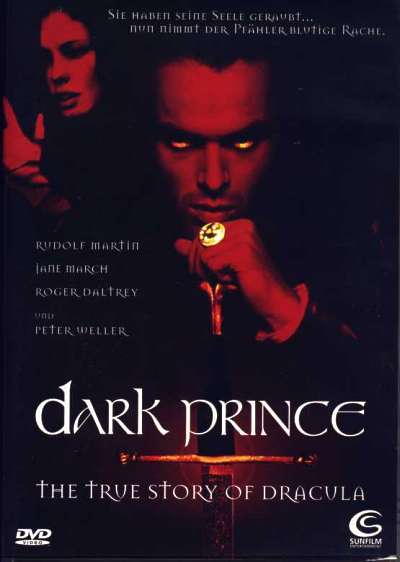 A few days ago I watched the heavily anticipated (for me) episode of Buffy The Vampire Slayer, “Buffy vs Dracula” which I also reviews here. While reading about the episode on Wikipedia I came to know that the guy who played the Count in this episode also played Dracula in a television movie called Dark Prince: The True Story of Dracula, which was released in 2000, the same year as that Buffy episode. A few checks later and I downloaded the movie to watch on my laptop.

The movie is said to be based on the historical figure, Prince Vlad III, also known as Vlad Tepes or Vlad Dracula, who ruled parts of Romania from 1456 to 1462. Vlad is the inspiration for author Bram Stoker’s Dracula legend which we all know, fear & love.  This movie tells us about his youth, growing up as the favoured older son of his father, a rich nobleman who was later murdered and Vlad (Rudolf Martin) & his younger brother Radu were captured by the Ottoman Sultan. Radu spent a lot of time with the Sultan for the latter’s sexual purposes and later turned to be on the side of the Turks, while Vlad would escape and seek help from the King of Hungary (with a wicked London accent as he is played by Roger Daltrey).

With the king’s support Vlad & his men attack & kill the Turks and the Romanian nobles who sided with them and Vlad takes over the castle his father once ruled. He marries Lidia, who is horrified on discovering what her husband does with the bodies of his enemies. She tries to take their son away but Vlad has her restrained and sent away for a while. Lidia (Jane March) keeps hearing voices, screams of those who were brutally murdered and later she kills herself by jumping from the castle tower. While Vlad & his son recover from their loss, Radu arrives at the head of an invading Turkish army, much larger than what Dracula can muster. Battles are fought and finally Dracula is hurt and carried away by his loyal right hand man Bruno (Christopher Brand) and recovers when others though him dead.

At the end of the film, Vlad is excommunicated by the Orthodox Church shortly before being assassinated by Radu and betrayed by Father Stefan (Peter Weller), a priest who was instrumental in the murder of Vlad’s father. As a result of his condemnation by the priests, Vlad is found to have risen from the grave and gained eternal life, free to roam the earth (as he has been denied entrance to both Heaven and Hell), implying that he has now become the very vampire for which his name is famous.

There are many inaccuracies in the story, major one being that Vlad did not rise from his grave. History’s penchant for superstitions & exaggeration gave him the stigma of having drunk the blood of his enemies. But he was brutal having a penchant for impaling the convicted on spears, even for smaller crimes. In reality Vlad was killed in battle with the Turks, not by the hand of Radu as in the film. Radu was already dead at the time of Vlad’s death. That being said, the movie looks authentic with some locales that look like it was from the 15th century. I’d give it a 7 outta 10.

Looks like Arsene Wenger’s stubbornness has dwindled down a bit and the man has loosened the purse strings to purchase a few players and strengthen his squad. This comes in the wake of last weekend’s humiliation at the hands of Manchester United and that 8-2 drubbing the club received. If that wasn’t a wakeup call then nothing is!

So let’s look at what we purchased; the big name is Mikel Arteta, the Spanish midfielder from Everton. Good signing as he will provide offense & chances for the strikers. Along with Youssi Benayoun, Arteta will serve to bridge some of that huge gap in creativity that the team has with the exit of Samir Nasri & Cesc Fabregas. But in terms of quality do not think for a second that the newcomers are of the same calibre as those who left. Benayoun joins us on loan from Chelsea. Meanwhile disgruntled striker Niklas Bendtner joins Sunderland on loan.

German defender Per Mertersacker who joins us from Werder Bremen is certainly a handful in the air at 6ft 6in tall and he’s been added to try and rid the side of their ineptitude at defending corners and set pieces effectively. However, the side may have to play a deeper line to compensate for his almost chronic lack of pace. Nonetheless, the Bundesliga’s almost break-neck speed of play is extremely similar to that of the Premier League and he should adjust fairly quickly. From AC Monaco comes South Korean forward Park Chu-Young comes for a fee around the £2m mark and with a one in three goals to game record throughout his career and significant international experience behind him, he should prove a solid squad player.

Brazilian left-back also joins Arsenal, even though Wenger had claimed that the club was well stocked at left back because they had Vermaelen, Traore and injury-plagued Kieran Gibbs to call upon. He’ll add pace and width down the flanks, even if his defensive attributes are under question. Arsenal left-back Armand Traore has joined Premier League new-boys QPR for an undisclosed fee.