Going back home from work is becoming an occasional nightmare. And yeah since it at night that really makes it a nightmare. As some of you may know, I travel from my home in Kacheripady which is near to the heart of Ernakulam city to Koratty which is a little town right after the border of Cochin/Ernakulam & Thrissur districts. It’s about 90 minutes during the afternoon hours when I leave for work and should take around 45 minutes on the way back because it’s at late night and there is no traffic to speak off. I leave the office at 12 am and should take less than 10 minutes to reach the main road/bus stop at night. One thing to add, walking around that area gives you a very desolate feeling but not to bad. Once I reach the bus stop it’s the wait for a bus to take me home.

Now the problem is that sometimes the bus does not stop there or they are not on time and sometime earlier than usual so there is a chance that I might miss one of these buses that ply on the roads at that time of the hour or be late. Most days it is ok as I get a bus heading to Ernakulam within 5 to 10 minutes and can be at home by 1:15 am. That’s a good day. Like last Wednesday I got a bus as soon as I reached the bus stop and 50 minutes later I was in Kacheripady. But not all days are like that. Due to the fact that some buses do not always stop at Koratty (the drivers can be real assholes) as it is usually the one person (me) at that time, I will take any bus that stops by and if they are not going to Ernakulam city, I will get down at the Angamaly bus depot, which atleast has a sitting area / rest room for travelers there. Plus there are usually more than a handful of people waiting for buses to go to Ernakulam, Kottayam, Thrissur, Trivandrum, Calicut etc.

So then I wait at Angamaly for a bus heading to the city and some days I don’t have to wait more than 10-15 minutes. But some days it is the pits. Yesterday I had to wait for an hour at the Angamaly bus depot for a frigging bus! One solid fucking hour! There were many buses headed to Kottayam, Trivandrum and Thrissur. When finally a bus to Ernakulam came by I got in – but it was so crowded and I didn’t want to stand all the way back home. So I got right back down and waited for another 10 minutes before I got another one. Although I didn’t get a seat, I could put my back in the overhead bay and relax with plenty of room to stretch. Time I reached home – 2pm!

Also during the last few days I found out that some buses won’t enter the Angamaly bus depot at that hour of night, which is why I have been getting late, waiting for buses that don’t go the proper route. I complained to the night station manager but he is a government employee in India & Kerala to boot! What did I expect other than some lame excuse! Fucking assholes don’t do their job properly and it’s us who are dependent on public transport who suffer. 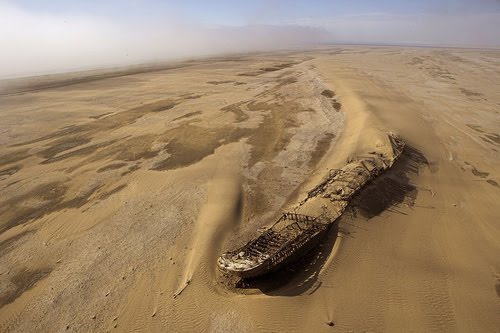 I have no idea how this ship or big boat got to the desert. Don’t know where this is shot but it just looked brilliant.