Hmm art is such a broad subject that it’s difficult to pigeonhole any one of the art forms and say this is what art I like best. However for the purpose of this blog prompt I shall say the following:

I like tattoos – tattoo art is on of the most difficult to do IMHO as a human or rather parts of a human’s body is the canvas and it is not a flat surface. Tattoo when done well is the most beautiful form of self expression and/or self identity. Most people get a tattoo done just because it’s cool and you want one but a lot of people (and their numbers are increasing) get one done to mark a milestone, pay homage to someone or something or crown an achievement in their life. A battle with an illness either their own or their loved one’s.

I’m not solely going by the stuff they have shown on the 3 reality tv shows on tattoos shops because we all know that a lot of that stuff is scripted and the sentimental stuff can be a lot of hogwash. But some of them are genuine and they symbolism behind the tattoo image is truly felt. Although tattooing a dead relative’s image on your body is too much if you ask me. But some of the stuff is really good.

Personally I would get something that is both a cool design and if I can find a symbolic meaning to it – great! The tattoo is for me as it is my body but you think it’s cool too, well let’s get a beer and talk about it. 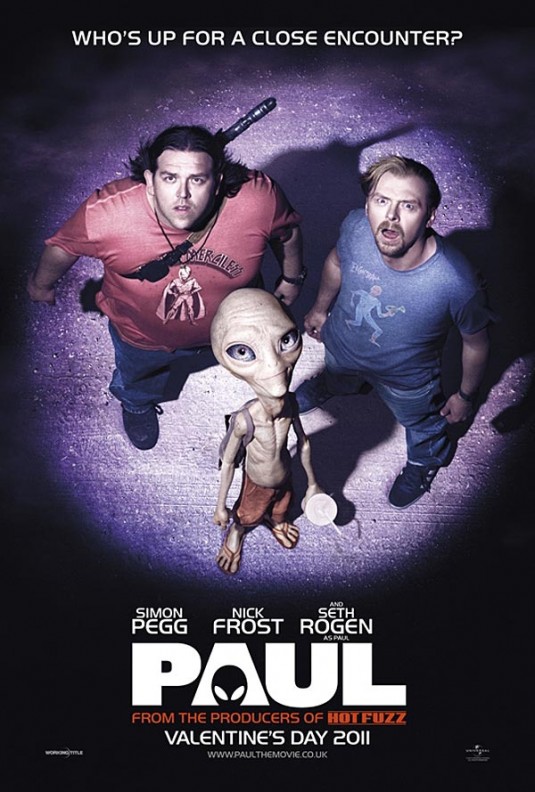 Paul is one of the best comedies that I have seen in a while. Compared to some movies which I have heard so much about how great & funny they are and then I watch it and go “ok movie, impress me” and get disappointed, I had barely heard anything about this movie at all! Except for a mention in two blogs as a must see movie (one in my cousin’s blog) all I knew was that Simon Pegg & Nick Frost wrote & star in the movie with Seth Rogen providing the voice of the title character. I bought this dvd a couple of weeks ago and I dunno why but I left it till last night to watch and Boy! was I so happy to watch it last night. It’s fucking brilliant!

Ok for the plot, Clive (Frost) and Graeme (Pegg) are two comic book nerds & scifi geeks who travel from England to the San Diego Comic-con and then rent an RV to hit the major sites of extra-terrestrial importance. On the way they find a crashed car driven by a short green alien, named Paul, who has been on earth for 60 years after his spaceship crashed. He was rescued by a young girl who named him Paul after her dog who died when the ship crashed on him and was soon taken away by the US military and has spent the last 6 decades using his knowledge to help them in technological advancements (albeit as a prisoner). Now he has escaped as they plan to dissect him for further studies of his abilities.

With the help of a friend, Paul has sent a signal to his people and needs to get to the pickup sight. A secret government agent Lorenzo Zoil (Paul Bateman) is sent by his superior (Sigourney Weaver) to capture him back. Two nitwit FBI agents are also on the search for him. Paul recruits Clive & Graeme to get him to the spot and the two agree; Graeme more enthusiastically than Clive. Along the way they also get a Christian fundamentalist named Ruth (Kristen Wiig) to join them, after Paul reveals himself to her and shatters her faith by sharing his knowledge of the universe via telepathic link. They also get Tara Walton (Blythe Danner) the girl who rescued Paul and who is now an old woman to join up in the RV as the FBI agents catch up to them. In the end the alien spaceship lands to rescue Paul. Tara is asked to join Paul on his world and Clive & Graeme say goodbye to their alien buddy.

So this is a really fun movie to watch. I was laughing out loud through the movie and thoroughly enjoyed it. For the premise, the way it is done and all that I have to give it a 9 outta 10! Watch it earthlings!