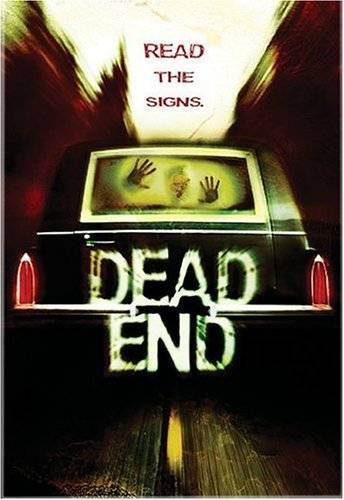 I heard about Dead End in a Youtube video in which this movie & especially horror movie fanatic listed & briefly reviewed his favourite horror movies of 2000-10. I was intrigued by the storyline and hit up the movie in Wikipedia and found out that Ray Wise (he’s known as the Devil in the tv series Reaper, a villain in RoboCop & I have seen him in an episode each of Star Trek : TNG & Star Trek : Voyager)  & Alexndra Holden (who played Ross’s much younger girlfriend & student in Friends). So I thought hey’s let’s check this movie out.

On Christmas eve the Harringtons – dad Frank, mom Laura, daughter Marion & son Richard – are traveling to visit Laura’s mom for Christmas. Along with them in the car is Brad, Marion’s boyfriend. Without initially telling the others, Frank decides to take an unknown route through the woods. They almost crash into another car as Frank falls asleep and they see a woman in white holding a baby. The woman has a cut on her forehead and doesn’t speak anthing, so the family decide to take her to a house with a phone (the cell phones don’t get reception in the area) and call for an ambulance. Marion offers to walk back as the car is small and there is no space for a 6th person.

As Frank & Laura stop and enter a small cabin looking for a phone, Richard goes out into the woods to jerk off to a nudie magazine. Brad is alone in the car with the woman and he screams when he sees the baby is dead & mutilated. As the Harringtons rush back to the car, Brad & the woman are missing and Marion sees him being driven off in the back of a black hearse. The family give chase but find Brad’s burnt and mutilated body on the road. Marion is in shock and has to be carried back to the car. She later announces that she is pregnant. On their way back, a baby carriage is found on the road mysteriously empty and Richard plays a sick joke on his parents with it. Soon Richard wanders off at the next time they stop and he encounters the woman in white. She kisses him and undresses but then bites his lips off and he screams. The Harringtons see him driven off in a hearse and when they chase it, once again they find  a dead burnt body – Richard’s!

Laura goes insane with grief and states that Richard was not Frank’s son but born out of a brief affair she had with Frank’s best friend Allen. She also says that she knew about Frank’s affair with another woman; both revelations shock Marion. Father & daughter talk about the affairs while they drive and they keep seeing a sign for a town call Marcott but no matter how long the drive they can’t seem to get out of the woods. A now childlike Laura takes out the shotgun (which was supposed to be a present for her brother) and accidentally shoots Frank in the leg. However, Marion cleans the wound and they go on the road again with Marion now driving. Laura jumps out of the car when she says she saw a dead friend and as Frank & Marion stops, they see her driven off in the same black hearse. Frank shoots at the car and it stops.

Laura comes out and starts rubbing the wound on her head real hard and dies. Frank tries to kill himself using the gun but is dissuaded by his daughter, saying that they have to walk through the woods. But they end up at the same spot that they started and then go to the cabin. Frank rushes in and is scared by the woman in white and he goes a bit insane and attacks his daughter, knocking her unconcsious. He then shoots at the woman in white but he too dies mysteriously. Marion has a dream that she sees all 4 of her loved ones in body bags on the road and the woman in white appears and tells her that the black hearse is not for her! Marion then wakes up in the car in time to see Frank falling asleep at the wheel and colliding with an oncoming car, driven by the woman previously seen dressed in white. In the car also is her baby daughter. The accident claims the lives of everyone in the vehicles but Marion. She suddenly wakes up in a hospital bed, and a female doctor with the name-tag “Dr. Marcott” is at her bedside.

As the movie ends we see a man dressed in black talking to Dr. Marcott; he says he was the one who found Marion and brought her to the hospital. Dr. Marcott explains to him that all the people in the accident were killed but this one girl Marion. As they both leave the man in black offers to give a lift to the doctor, as her car has stalled, and they both drive off in his….black hearse. As they leave the man tells the doctor that he is a collector! As the credits roll we see the cleanup crew finding a note, written by Frank, on which he had listed buying an Atari and being the best grandfather ever as his to do list, while talking with Marion.

Spooky film thought not as spooky as I thought it would be on hearing about the premise of the movie. It could have bee done a lot better but the film does have it’s moments and does it’s job for a small budget movie. There are some dark moments of comedy also, especially with Laura (Lin Shaye has won some awards for her comedic relief in this movie). Released in 2003,  I’d give it a 7 outta 10!

I was a watch wearer from very young till the age of 29. I remember wearing a lot of watches during my youth (even an infamous Michael Jackson electronic watch which has ‘Beat It’ as an alarm at the age of 9). As I turned 12 I wanted more normal style, grown up men’s watches an usually either my dad or mom would pick up one for me. I remember getting a really good one for my 15th birthday and years later at the age of 23 another one. Watches are usually a good birthday present.

In 2005 I started developing a bad rash on my left wrist that itched like crazy. I was allergic to the strap material of my watch. I went to a shop on Marine Drive and changed the strap twice – both times the rash still persisted. I remember I would wear my watch to work and then remove it as soon as I reached my work station, where it would remain on my desk until quitting time. My super boss, a DGM, asked me what happened and I showed him the rash. He recommended a good ointment and told me to consult a renowned skin specialist who was a friend of his and told me not to wear a watch for a month or two.

The ointment worked well but I just stopped wearing a watch and till date have not worn one yet. I just got used to not wearing one as the months passed by and it was easy enough to check the time on my mobile phone which I carry with me anywhere I went. During the last year or so I’ve thought that maybe it was time to start getting a watch again but I haven’t bought one yet. I love Mark Ecko watches, like the one pictured here, and would love to own one soon. There are a few designs that I like a lot.