I do not know why I bothered to do the previous post on beer glasses, getting those individual glass images and putting them one by one onto a single jpg via MS Paint. Here is a much better image and no only does it look good but it’s in fucking colour. Shit, piss, buttcracks – never mind! Enjoy the fucking awesome list of beer glasses.

It’s been a while since I met anyone from my school days. I haven’t been able to keep in touch with any of my friends (School ended at grade 10, age 15 and then college for 2 years of predegree as was the format at that time) since I turned 23. From age 17 till 23 I met a few of my friends on a semi-regular basis as some of them lived near me and it was easier to hang out with them. I would go to one of their houses or they would come to mine and we’d go for a movie or get some lunch or beer during the evenings. I think I last met one of my friends Binju at the wedding of a mutual non-school friend we both in 1999. Another friend, Renjish, lived quite near to my old house in Thrikkakara and we met quite often until 2003-04.

Couple of times I have had my old school mates join the same company that I worked for. In 2005 I was quite surprised to see Jesna, sitting in as a call center agent in my old office while I was a trainer in one of their other centers. I happened to come over to the main office for a meeting when I saw her and was pleasantly surprised. Jesna was a girl I would often run to in & around Marin drive for a few years after we completed 5 years of being in the same school of our school. Also in 2008 just when i got promoted, another of my school friends (I just can’t remember her name right now) joined at the entry level after spending the past 6 years raising her twins. Unfortunately she found the ever changing shift timings tough to handle, especially since she had a young family and quit in a month’s time.

Through Facebook I have been in touch with a few friends from school and while that is great, it is nothing compared to meeting them in real life. Most of them are married and have kids right now, some of them are abroad and some of them look very different from what I remember, going by pictures, and some of them have barely aged except for looking like older versions of their 15 year old selves. I just feel that we should be able to find the time and space to meet up sometime since a lot of us live in the same city. 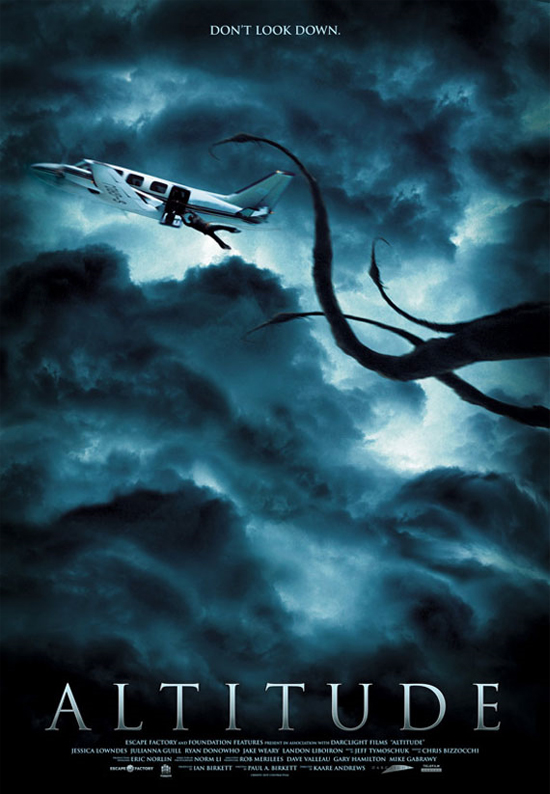 The movie starts out with a family of three flying in a small plane piloted by a lady. The young boy is extremely nervous as he looks out the window, another plane, seemingly out of control, crashes into them. Years later, Sara (Jessica Lowndes) who has just received her pilot’s license, is planning to fly to a concert with 4 of her friends. Sal (Jake Weary) and his girlfriend, also Sara’s best friend Mel (Julianna Guill), her cousin Cory (Ryan Donowho) and her boyfriend Bruce Parker (Landon Liboiron). As they meet up at the airport we find that Sal is an idiot jerk – the kind who thinks he is awesome because he is a jock and drinking a few beers makes him go all “whoo!” and annoying everyone else. Cory has a crush on Mel and is mainly on the trip for her.

Bruce is the only survivor of the crash from the beginning of the movie, the little boy. The other two guys taunt him for his nervousness and for the fact that Sara gave him a rare comic as a gift. When Sara makes him take the controls for a little bit he loses control and has a panic attack as they hit some turbulence and start climbing higher tan expected. Sal, a wrestler, puts him to sleep by using a choke hold on him and they tie him up. A  faulty bolt comes loose and is jamming Sara’s attempt to bring the plane down and they fly into a storm and lose all radio contact. Sara says with the elevator jammed, they will keep climbing until they either run out of fuel or reach the aircraft’s ceiling. She tells them they have less than an hour’s worth of fuel left.

the only way to unjam the tail is to climb outside and manually remove the obstacle. Cory, who has experience as a climber, volunteers. He has brought climbing gear with him, and has a rope for an anchor. Sal wraps the rope around himself and after some difficulty, Cory makes it to the tail and removes the errant bolt. Sal catches sight of a horrifying shape, and losing control of the rope, Cory slips and Sal is pulled out of the aircraft. Panicked, Sal cuts the rope, and Cory falls. Bruce reveals to Sara that he was in the aircraft crash that killed her mother and his parents. Sara leaves him in the back, to try to find help on the radio, and hears a strange noise. Sal recognizes it as the monster that took Cory. After some confusion and argument, the aircraft crashes into the monster’s open mouth. Bruce looks at a page of his comic which shows a blond woman being grabbed by tentacles. Immediately following, a large tentacle grabs Mel. Bruce starts flicking through the comic book, as if he has discovered something. Sal threatens to kill Bruce for causing Mel’s death and tries to throw him out, but Sara intervenes and in the ensuing confusion, Sal falls out the door.

Bruce tells Sara that he is causing all this by recreating the events in the comic when he gets really scared. The creature starts attacking the aircraft, and Sara demands that Bruce prove he is doing it by ending it all. His attempts just make things worse, until Sara kisses him, but is grabbed by the monster. She tells him that if he can do all this, then he can bring his parents back. After a struggle, the monster suddenly disappears and she falls back into the aircraft. As they fly out of the storm, they see another aircraft heading straight for them, carrying Bruce,his parents and Sara’s mother. They manage to take control of their aircraft, and so don’t crash into the other. The past is altered, as Sara’s mother and Bruce’s parents survive and they land the plane safely. At the airport, a young Sara meets a young Bruce for the first time.

Did this all actually happen or did the boy dream this up? Did they somehow cross timelines in all that flying? Although the concept is fresh and a change from the usual horror stuff, the movie fails with it’s script. The usual behaviour of some of the characters is tired & repetitive – why must all horror movies have a real asshole in the cast – and dialogues are forced and fake. They could have done better and made this low budget movie a whole lot memorable and make it a cult movie. 6 out of 10!