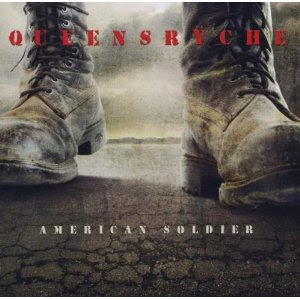 Queensryche have long been one of my fav bands, ever since I heard Silent Lucidity back in 1991-92. They started out as more of a metal band but after a couple of albums they moved a lot more into the prog-metal band category. Most of their albums are based on a central theme and this one, their 10th, is a perfect example – American Soldier was released in 2009 and is a concept album that evolves around the lives and experiences of those who serve or have served in the United States armed forces.

Singer Geoff Tate spent a few years interviewing veterans from all conflicts America has been involved in from World War II to the Iraq War, including his own father and collecting their stories in order to help him write the album.  Starting of with a command “ON YOUR FEET” Sliver is the first track on the album. Not one of their better songs, it comes off like a cross of Limp Bizkit & a number of nu-metal bands during the chorus. I had an image of a drill sargent berating his troops while the song was playing along. The next song, Unafraid, is straight from the horses’s mouths, so to speak. The song uses dialogue from the soldiers’ interviews for the verses and Geoff Tate for the choruses. Thematically it is a great idea but does nothing as a song, although I see where the band is going with it. Slow paced & mixing clean & grittier guitar riffs, Hundred Mile Stare is more like it. The song also sounds like some of their older more popular material.

At 30,000 FT is about that feeling of being alone while in a fighter plane during a mission to attack the enemy. The pilot does not see or hear the people screaming in agony, bleeding & broken or running to escape. Reminding us of the atmospheric songs on 1994’s Promised Land, A Dead Man’s Words features seductive middle-eastern riffs and scales play in the background while Tate layers his vocals and even throws in a saxophone solo. Musically this is one solid song. The Killer is thoughts that a soldier struggles with in a war. If you have found yourself in the middle of a battlefield with people dying or dead left, right & center and you are trying to just make it out – welcome to Middle Of Hell. The song sounds like more of an out of the body experience or one in which the person is too stunned to do anything else. If I Were King is a pleading to have his fellow soldier back alive and praying for a miracle. Survivor’s guilt or just missing your comrade, it’s something all soldiers go through.

Man Down! is more of the same, focusing on survivor’s guilt and the horrors of remembering how some of your fellow soldiers were killed during an attack. Remember Me is a dying soldier’s last words before the life runs out. Home Again is about the other end of the spectrum, the family that struggles when the father/husband/son/brother is away in a dangerous place and is away for months & years. Tate sings this song with his then 10 year old daughter; the song  focuses on a father returning home to his family after having been gone an extended period. This theme reflects both the life of Tate as a touring musician and the life of one who serves in the military. This song belongs in the list of best ballads from the rock world. We end the album with The Voice is also about a soldier during his dying moments.

While certainly not in the class of Empire, Promised Land & Operation Mindcrime, the album does have it’s moments. I had hoped that they would have done things a bit different for some songs. The band hasn’t been the same without the talents of former guitarist/lyricist Chris DeGarmo and it shows once again. Still musically Queensryche is a force to reckon with. Michael Wilton did most of the guitars in the album, with some help from former member Kelly Gray, who engineered the album. New guitarist Parker Lundgren joined the band after the album was released. Here is the video for If I Were King.

I know I have mentioned this previously but not blogged about the whole thing – back when I was a teenager, somewhere between the ages of 15-17 if I remember correctly, my cousin Manoj and I made some pizzas for the rest of our cousins. Yes we two teens actually cooked a few pizzas for the rest of the bunch.

What we had were pizza bread base that we used to get here in India at some supermarkets, more like khuboos, not too thick and about the size of a small pizza base. The other ingredients were grated cheese that we also got from the menu, tomato ketchup from a bottle (since we didn’t have any real tomato paste), chopped up tomatoes & onions, mushrooms that his mom gave us, green peppers and some kind of shredded meat which his mom had already cooked (I’m not so sure about this). Ok, now “cooked” is a big stretch of the imagination! It was more like Manoj & I spread the tomato sauce on the bread base, sprinkled the cheese that we shredded and then placed all the toppings that we had chopped up along with the meat. And we’d heat it in the microwave oven.

They were a great hit and our cousins hungrily & gratefully ate up all the pizzas. I think each person had atleast 2 and some possibly 3 each. The mushrooms were delicious and so were the rest of the pizzas. Unfortunately – we ran out of the stuff by the time everyone else had eaten and the two of us didn’t get any and we were starving. So we ended up with just the bread bases and eggs that we cooked and ate them up. Still it was a fun experience that I remember so fondly from my teenage years.