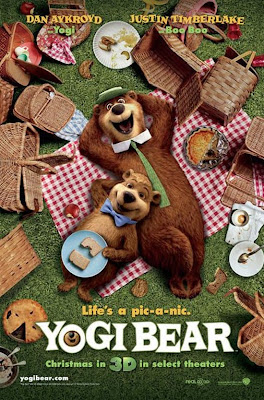 So…did somebody ask for an above average bear? I loved the Yogi Bear cartoons as a kid which featured Yogi and his friend Boo Boo stealing picnic baskets from happy campers at the Jellystone national park. Even as I grew out of that kid phase, these cartoons appealed to my sense of humour. But having never watched any Yogi Bear stuff for over 10 years, I’d almost forgotten about the loveable big bear and his antics until 2010 when I came to know that they were making a movie based on him.

Yogi Bear the movie stars Tom Cavanaugh as Ranger Smith, Anna Faris & TJ Miller with the voice of veteran actor Dan Akroyd & (ugh) Justin Timbersucks aka Justin Timberland as Yogi Bear & Boo Boo respectively. I almost didn’t watch this movie because that former boyband bullcrap Justin is the voice as Boo Boo. Well, the good thing is I do not have to see that imbecile on the screen! Anyway the storyline is predictable and silly and corny but it still works for the big screen and I like it.

So as we have Yogi inventing new ways of trying to nab “pic-a-nik” baskets from unsuspecting families that come to the park for camping. Boo Boo tries to be the voice of reason. Ranger Smith has to prevent the bears from stealing the baskets with the help of his subordinate, the ambitious Ranger Jones.  Meanwhile, Mayor Brown realizes that his city is facing bankruptcy due to profligate spending on his part. If he lets the park be shut down and let it go as a logging site, he will rake in lots of cash to fund his election campaign for state governor. In order to save the park Rangers Smith & Jones  and a documentary-shooter named Rachel Johnson (Anna Faris) put their heads together.

Smith comes up with a Centennial fest to encourage seasonal passes for campers and thereby make more money. However in order to sabotage it, the Mayor  plays on Ranger Jones’ desire to be head ranger and promises him the position if the funds are not raised. Yogi has promised Ranger Smith to be on his best behaviour and stay out of site while the celebration is going on but Jones convinces him to go ahead with making the fest more exciting. Yogi tries to please the crowd with a water skiing act, which initially seems to please the crowd but goes awry when he accidentally sets his cape on fire. Chaos strikes as the fireworks Smith set up are knocked over and ignited prematurely, launching them into the assembled audience who flee in a panic. Jellystone is shut down, Smith is reassigned to a small enclave in the city, he abandons all hopes of dating Rachel and the bears are miserable & sorry.

Smith, Rachel, Yogi, and Boo Boo plan to stop the sale of Jellystone. They learn that Boo Boo’s pet turtle is a rare and endangered species, which means that the Park cannot be destroyed with the turtle there. Jones regrets his decision to betray Smith when he realizes the mayor’s true intentions. They record the Mayor speaking about his  that he is willing to gain more power to shut down the park in order to become governor and his confession is played out for the public & press to see on a big screen display. With his plans foiled, Jellystone Park is opened up again and Ranger Smith is reinstated and runs the park with  Jones who still works there, giving out papers about how Jellystone has a rare type of turtle. Rachel & Smith are together as a couple at last and Yogi & Boo Boo are back to stealing picnic baskets.

A must watch for fans of the old cartoons and for new people to discover the fun of Yogi. However, it is a silly & predictable bubble gum of a movie. It’s for the nostalgic kids in you. 7 outta 10! 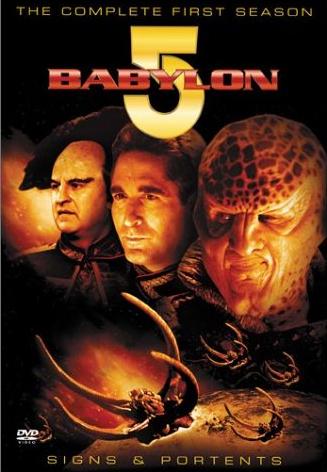 So as season 1 starts, one year has passed since the events of the pilot movie. Commander Jeffery Sinclair is in charge of the station and has a new first officer, Lt. Commander Susan Ivanova, a Russian whose pilot brother was killed during the Earth-Minbari war. She also has a deep distaste for telepathics & the organization Psi Corps, because her mother was one and she was subjected to cruel tests by them and later committed suicide. Talia Winters from Psi Corps is assigned to Babylon 5 to serve as its second resident commercial telepath. (as Lyta Alexander has been assigned elsewhere. Michael Garibaldi is in charge of Security on the station.

Much of the story revolves around Sinclair’s gradual discovery that it was his capture by the Minbari at the Battle of the Line which ended the war against Earth. Upon capturing Sinclair, the Minbari came to believe that Valen, a great Minbari leader and hero of the last Minbari-Shadow war, had been reincarnated as the Commander. Concluding that others of their species had been, and were continuing to be reborn as humans, and in obedience to the edict that Minbari do not kill one another, lest they harm the soul, they stopped the war just as Earth’s final defenses were on the verge of collapse.

During the season Narn ambassador G’Kar & his Centauri counterpart Londo Molari are usually at loggerheads and the season opener has the Narn attack a Centauri colony. Strange aliens like the Soul Hunters ( an immortal race who can sense death and supposedly steal someone’s soul) and a Dilgar named Jha’dur aka Deathwalker (played by the delightful Sarah Douglas) come and go instigating trouble. Catheine Sakai (the lovely Julia Nickson), Sinclar’s old flame is also is a recurring character and the two rekindle their affair as she makes regular visits to Babylon 5 on business. The station has to deal with Psi Corps agent Bester (played by Star Trek‘s Walter Koenig) who are out to apprehend a rogue telepath with exceptional powers & who takes refuge on Babylon 5.

Ivanova has to deal with her father’s death and also her resentment of all telepaths before she becomes friends with Talia. Towards the end of the season Londo is helped by a mysterious man named Morden whose associates, the Shadows caused the death of 10,000 Narns and makes Londo a hero to his own people. The Shadows are a super advanced alien race that comes out of cloaked vessels to attack & brutally kill the Narns. Meanwhile there is a plot to kill Earth President Luis Santiago which happens and the VP is sworn in as his replacement. Delenn undergoes a metamorphosis and her fate in unknown at the end of season 1 as she remains wrapped in a cocoon and her assistant Lennier will not let anyone or anything disturb her. Garibaldi’s aide has attempted to kill him to keep the assassination plot secret and Michael is in medical bay being cared for by Dr. Stephen Franklin. What will happen in season 2?

What if one of those shot-put athletes throws the stone? Have you seen the size of those guys & gals? Wait – have you seen the size of the stone that they throw? If they threw a tiny stone or a pebble, it might go into orbit! So is the store now in orbit around the earth? And how can I get there without a spaceship? This is getting to be an expensive trip to the beer store!

What about the size of the stone? I found a tiny stone and threw it- I couldn’t even see where it went. Then I threw a pebble and then a bigger stone. The distance kept decreasing as the size of the stone I kept throwing kept increasing. Different distances. But no one said that the stone has to be of a particular size!

In conclusion, don’t tell me that something is a stone’s throw away. Maybe I don’t want to throw a stone. Maybe I want to toss it. Unless it is Sharon Stone or Emma Stone!