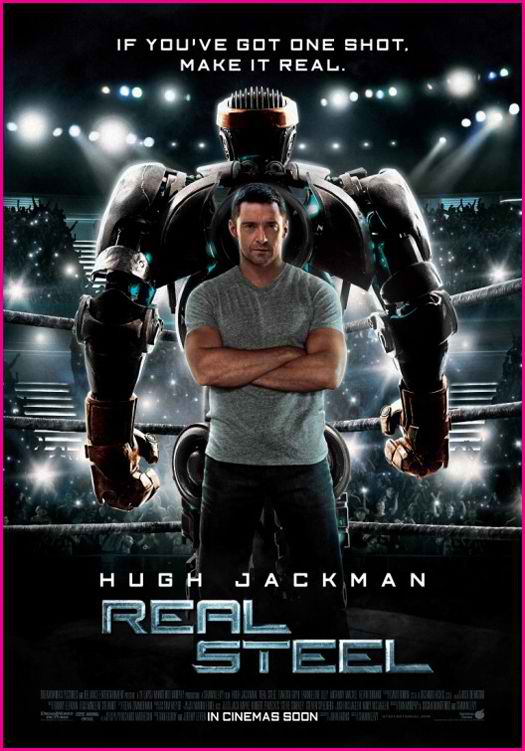 A movie like Real Steel is meant for a couple of things – launch the career of a young actor is one of them and if this movie has done one thing right, I hope it is to bring the young actor Dakota Goyo to the limelight.

Those of you who have read my posts on movies & movie reviews may know that I do not like Hugh Jackass aka Hugh Jackman. He just pisses me off and I think he is pretty much a one-dimensional actor but really annoys me as well. However he has acted in movies whose topics I like (X-Men Origins : Wolverine & Van Helsing for example).

Reel Steel is co-produced and directed by Shawn Levy and stars Jackman with the aforementioned child actor Goyo, Evangeline Lilly & Kevin Durand. The story is simple; a few years from now boxing is banned and robots have taken the place of boxing for humans.  Charlie Kenton (Jackman) is an ex-boxer who know uses a robot. At an event, having made a bet that Ambush would win, Charlie now owes promoter Ricky (Kevin Durand) $20,000, which he doesn’t pay before leaving. Charlie goes back to his city where he finds out that his ex-gf has died leaving behind a young son Max. Max’s uncle & aunt want full custody, which Charlie gives them in exchange for $100,000, half in advance, on the condition that Charlie take care of Max for three months while the couple are away on a second honeymoon.

Charlie takes Max to meet up with childhood friend Bailey Tallet (Lilly) who runs the boxing gym of her deceased father, Charlie’s old coach. There Charlie buys a new robot xecondhand World Robot Boxing league (WRB) robot, the once-famous Noisy Boy, and in his enthusiasm arranges for a fight with the illegal circuit’s champ robot Midas. Due to inexperience with the controls & overconfidence Charlie loses and Noisy Boy is destroyed. While scrounging for parts in a dump, Max falls and slips in the muddy slush but his shirt gets snagged on the arm of an old mostly buried robot. Max & Charlie dig it up and find it to be an obsolete Generation-2 sparring bot with shadow boxing fuction for following human movements. Max loves Atom as the robot is called and fixes it up. At an outdoor event Max bets $1000 for a win against another robot and wins. Max later upgrades Atom to take vocal commands and to have harder-hitting fistcuffs, using parts from Charlie’s demolished robots, and convinces Charlie to train Atom.

Atom’s subsequent wins against bigger & more sophisticated bots brings both robot & Max lot of fame. At a big WRB event, Atom beats Twin Cities in an exciting match. After the match Max challenges WRB champion Zeus, designed by genius Tak Mashido (Karl Yune) and sponsored by wealthy Farra Lemcova (Olga Fonda), who before the match tries to buy the upstart Atom. As they leave the stadium, Ricky’s men catch up with Charlie and beat him up. Charlie recovers and takes Max to his uncle & aunt feeling Max will be safer with them and refusing the second half of the money he was promised. Bailey pushes Charlie to do better and that he can be a better father. With Max coming out to the arena and with Bailey & Max’s uncle & aunt in the crowd, Charlie leads Atom to a victory over Zeus with a lot of boxing terms being tossed around and blah, blah, blah from the supporters and cliches reign, the underdog lasts all the rounds but does not win as the unfair judges declare Zeus the winner on points. However the crowd is all for Atom & Max and the bot is declared the People’s Champion, father & son reunited and hand over the tissues if you are lame enough to be moved by this drivel.

So our hero is a father who wanted nothing to do with his son and was willing to give him away for money? And it takes his son being able to show him how to win money to make the dad finally start loving the kid! 6 out 10 and that’s for the kid actor & the special effects! In episode 5 (called Peaches which is Lena’s childhood nickname) we focus on what happened to Lena’s father cameraman Russ Landry who was with Emmett Cole’s crew. With all the talk about finding Emmett, Lena meekly reminds Tess that the aim to find “them” meaning the whole crew and not just “him” meaning Emmett. During a personal interview section, Clark asks her how come Lena plays the accordion! She replies that her dad had wanted a boy, and if not a boy, then a nerd girl who plays the accordion so nobody would ask her out. She is upset that there’s a lot of footage of Emmett but none of her dad’s. It is Jonas, now part of the crew, who shows her a single entry by Russ who stops to shoot a brief message to Lena.

Later in the night as visibility goes down due to fog another boat side swipes them and disappears much to the surprise of the crew. This also leaves them with repairs which cannot be completed without spare parts. The crew has no option but radio for help hoping that someone will hear them and offer help. A day later, and after Lincoln suggests that they travel through the jungle by foot, a boat approaches them. 4 people, claiming to be environmentalists on the Exodus stop by and offer them some spare parts – they just happen to have the exact ones needed. In exchange Tess offers to cook dinner for the 4 of them as a thank you and all is fun & drinking on the boat. Jonas joins Lena outside on the deck where they spot something moving on the Exodus. They decide to investigate and take the dingy and a small handheld. One abroad they hear a sound that leads them to a cargo hold and they find a chained… Russ Landry!

On board the Magus, Kurt overhears two of the environmentalists planning to do something with his crew and so he confronts their leader and shoots at him twice when the latter attacks him. Thinking him to be dead Kurt approaches the body when the latter grabs him. Kurt is taken over to the Exodus and dumped into the hold along with Lena, Jonas & Russ. Soon the female environmentalist tricks Tess into joining her on their boat to study a map and once abroad the 4 environmentalists reveal their ghostly selves! Turns out that the Exodus crew are ghosts trapped on the ship, due to some curse, until they can find living souls to take their place and they only need one more and a sunrise to be free from their curse. The Exodus takes off leaving the Magus behind. Once again it is Jahel who hears the a message/signal fro Lena and alerts Lincoln to Exodus’s location. AJ & Clark join Lincoln in a dingy to find their crew members and they board the Exodus.

Kurt busts the rest of them from the hold and just as Lincoln & co arrive, they join them on the deck of the Exodus. The ghostly environmentalists attack them but are chased away by fire (strange)! The 4 ghosts are secured into the cabin and Lincoln sets the boat on fire and the rest of the escape in the dingy – but Russ won’t join them! In another twist, he is a ghost as well and stays behind despite Lena’s cries and joins the other 4 in being destroyed. The crew fix their ship and get back on course.

Not another one – call Bruce Willis & Ben Affleck! Scientists have detected a comet 140 meters in diameter that is due for a fly-by in 2040. There is an outside chance that it could collide with Earth. Doomsday Sayers & religious fundamentalists now have a new year to predict the destruction of earth.

The giant rock, which is called 2011 AG5 & is about 460 feet (140 meters) wide, has an elliptical orbit that will bring it within striking distance of our planet in 23 years. According to researchers the comet could be diverted towards Earth by a gravitational keyhole – an area of space subject to the gravitational pull of surrounding planets. Detlef Koschny of the European Space Agency’s Solar System Missions Division says that since they have only observed it for about half of it’s orbit, they aren’t very confident of the calculations.

NASA has calculated that AG5 has a one in 625 chance of striking Earth in 2040. Scientists at the 49th session of the Scientific and Technical Subcommittee of the United Nations Committee on the Peaceful Uses of Outer Space in Vienna are taking the threat in all earnest and have even begun to draw up possible deflection scenarios. They are using comet AG5 as a “desktop exercise” for the development of technologies to deflect asteroids and meteorites that stray too close to our planet. It is thought scientists will be able to better gauge the course of the comet in 2013 as it will be observable from the ground, but until then they will be keeping a close eye on the celestial giant.

When I get older losing my hair,
Many years from now.
Will you still be sending me a Valentine.
Birthday greetings bottle of wine.
If I’d been out till quarter to three.
Would you lock the door.
Will you still need me, will you still feed me,
When I’m sixty-four.