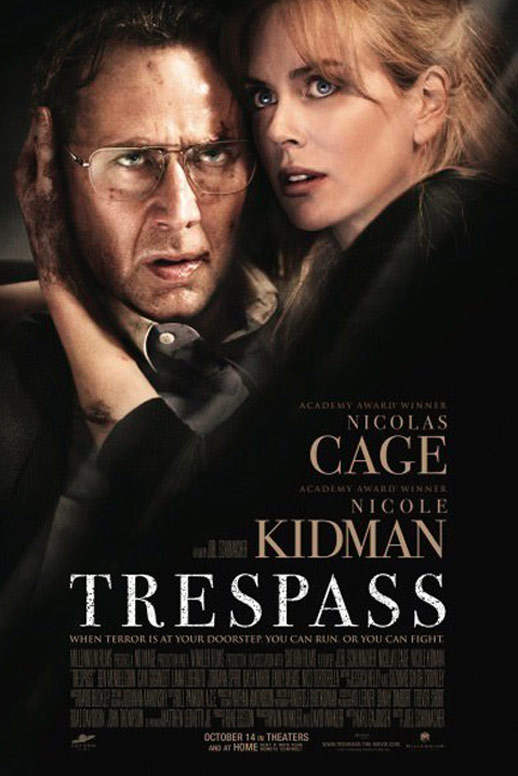 A movie starring Nicholas Cage & Nicole Kidman should be big news. Somehow I didn’t even hear about this but just happened to catch a clip of it on youtube and then wanted to see it. Trespass is a Joel Schumacher directed film and starring the acclaimed actors as a married couple. The small cast is rounded up by Liana Liberato, who plays their daughter, Cam Gigandet, Ben Mendelsohn, Jordana Spiro & Dash Mihok.

Businessman and diamond dealer Kyle Miller has a large lavish mansion with a security system and cctvs. He works most of the time even when he comes home he is on the phone and walks straight to his home office. His wife Sarah & teenage daughter Avery complete his dysfunctional & emotionally distant family where the love is almost gone. His daughter has a fight with mom cause she wants to go to a party with her friend Kendra at a boy’s house. Upset she goes to her room and doesn’t come out for dinner. Sarah appears bored of life as a housewife and yearns for more in her marriage while Kyle seems to harbor a hidden aversion towards his wife. While Kyle is wrapping up a deal in his home office, their home is suddenly invaded by a gang of burglars masquerading as police.

Elias, his girlfriend Petal, his younger brother Jonah and an imposing man Ty come in and demand large amounts of cash & diamonds. They say that they have been spying on them for some time and know a lot of details about the Millers. Threatening Kyle with a syringe containing lethal chemicals they demand that he open a case in his office. Believing that both he & Sarah will be killed once the safe is open he refuses. Sarah meanwhile recognizes Jonah despite his mask and it is implied that she & Jonah had a brief affair while Jonah was employed as a technician to install the house’s security system. Unbeknownst to Elias, Sarah secretly steals the syringe from him during this conversation. Without her parents knowledge, Avery had slipped out from her room through the window and went to the party. At the party, disgusted with the host’s attempts to seduce her, Avery had left it and returns home and is captured by the thieves.

Elias tells Kyle that he needs money for his mom’s kidney transplant and if he doesn’t open the safe and give his money to them, he will cut out one of Avery’s kidneys instead. Sarah catches Elias off-guard and holds him hostage with the syringe and they compromise to letting Avery go in exchange for Kyle opening the safe. He does so, revealing it to be completely empty. Kyle explains that he is actually bankrupt and has no money; his house and all of his possessions were bought on loaned credit. Angered Elias breaks Kyle’s hand and takes Sarah’s diamond necklace which Kyle confesses is also fake, having sold the original & replaced it with a fake one. Ty runs and re-captures Avery and brings her back to the house. Kyle volunteers for his own kidney to be taken instead of his daughter’s, but Elias reveals that it was a ploy and that he hated his mother, who is already dead. Ty growls at the rest of the team after receiving a phone call and it becomes obvious to the Millers that the thieves themselves are being forced to commit the robbery.

The Millers are separated with Sarah being pursued by Jonah in the kitchen; Kyle uses a lighter to cut his & Avery’s binds and tells her to run and set off the alarm systems. Kyle attacks Ty and injects him with the syringe causing the big man to be knocked out unconscious. Thinking that Ty is dead, Elias shoots Kyle in the leg and reveals his true motives: that he is a drug dealer working for an organized crime syndicate. Shortly after being given a job to sell $180,000 worth of cocaine, Elias and Petal were carjacked at gunpoint and all of their shipments were promptly stolen. Faced with threats of retribution, Elias was then forced to commit a heist (under the supervision of henchman Ty) to pay off his debt. Jonah, who had previously seen the Miller’s residence, suggested it as a place to rob. We soon find out that Jonah is mentally unstable and imagined the affair with Sarah. Jonah brings Avery back to the house and is forced to cancel the alarm by calling the security company’s hotline and telling them it is a false alarm. A security guard does show up at the house but Jonah shoots him dead.

Avery then tells the thieves that she can lead them to a lot of cash, which she saw at the house of the party she went to. Petal goes with her in a car but Avery purposefully crashes it against a post and fatally injuring Petal and makes her way back to her house. Ty wakes up and attacks Sarah and Elias is forced to kill him when Ty attacks Jonah as well. Before dying Ty reveals that Elias was setup into doing this heist and that Jonah was the mastermind behind it just so that he could get Sarah. Elias & Ty argue which lets Kyle & Sarah escape to the outhouse. There a lot of cash is discovered, which Kyle has stashed away as a nest egg for his family. Avery also appears with a gun but Elias takes it from her and aims it at Sarah. Enraged Kyle kills his brother and tries again to convince Sarah that she belongs with him but she rebuffs his offers, calling him insane. Kyle sets the outhouse on fire & shoots Jonah’s foot with a nail gun, trapping him in the shed. Jonah is engulfed by the flames while the Miller family moved to safety as the outhouse collapses behind them. Avery calls the cops.

As you can probably notice by my rambling review, the movie is a mess and isn’t shot well. I can’t blame the actors for it and I think they all did a fine job considering the script. Liana Liberato is again awesome (she was the lead in Trust) and man does Nicole Kidman look so fine in this movie. 6 out of 10!