Keep staring at the staring lady.

And she will stare right back at you! 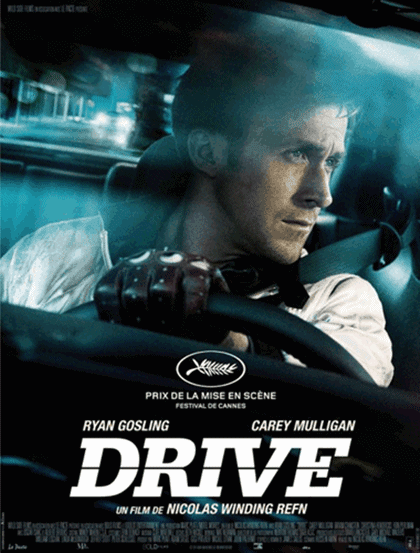 Danish director Nicolas Winding Refn (the other movie of his that I have seen is Valhalla), brings us Drive starring Ryan Gosling, Carey Mulligan, Bryan Cranston, Ron Perlman, Christina Hendricks and Albert Brooks. Those of us (me included) who didn’t know anything about the plot before watching the film, and are expecting a high intensity, car chasing or even a race movie, will find themselves thoroughly disappointed if that’s the only thing that they wanted to see. I did expect the same and was a bit disappointed at the slow pace but still enjoyed the movie.

The unnamed Driver (Gosling)  lives in a low-rent apartment building and works as a mechanic, stuntman but his real talents are his driving skills for which people seek him out as a getaway driver. He is known as one of the best drivers for this and works anonymously and never works for the same people twice. We see him waiting for a job to be finished and driving away to safety once the thieves are in the car. His other rule is that he will only wait 5 minutes before he drives off from a job. Shannon (Bryan Cranston) owns the garage the Driver works at and arranges his other jobs. Shannon gets mobster Bernie Rose to invest in a stock car for Driver to race, which he does once he sees the Driver’s skills.

Nino (Ron Perlman) is Bernie’s business partner and had once broken Shannon’s pelvis for failing to pay off a debt, leaving him with a permanent limp. The Driver meanwhile meets & befriends his neighbour Irene and her young son Benicio and helps her out. He becomes close with he both of them. However when Irene’s husband Standard is released from jail, the budding relationship is halted.  Standard is beaten by a gangster, Cook, for money that he owns and seeks the Driver’s help to rob a pawn shop and pay off his debt. The Driver agrees to take Standard and Blanche, Coo’s moll, to the pawn shop as their getaway driver. The job goes wrong and Standard is killed while the Driver escapes to a motel with Blanche, with the killers in a car chasing them, where he threatens her to spill out the truth. She admits him that the chasing car belongs to Cook and that she and Cook planned to double-cross the Driver and Standard, taking the money for themselves. Two of Cook’s men attack them in the motel room, killing Blanche and injuring the Driver before he kills them both.

The Driver confronts Cook at a strip club and finds out that Nino is behind the pawn shop heist. He returns back to his apartment building, meets Irene and they go up in the elevator. A hitman sent by Nino rides along with them and is instead brutally killed by the Driver who repeatedly stomps & breaks the hitman’s head. Nino meets with Bernie and tells him what happened, upon which the latter goes to Shannon’s garage and kills him as a warning to the Driver. The Driver chases and kills Nino by drowning him in the ocean and then arranges to meet Bernie at a Chinese restaurant. The Driver says his goodbyes to Irene and meets up with Bernie, who agrees not to kill Irene & her son in exchange for money. n the parking lot, Bernie stabs the Driver in the abdomen as he pulls the money from the trunk of his car. The Driver fatally stabs Bernie, leaving his corpse and the satchel of money behind. That evening, Irene knocks on the Driver’s apartment door, with no response. The film ends with Driver driving into the night.

Storywise it might not be a plot stirrer but the movie works in a weird way. Even the tacky 80s style synthesizer music seems oddly in place with the movie. It’s not a movie I’d watch over & over again but it’s definitely worth getting just for the difference from other movies of our times. 8 out of 10! Alright now it’s time to focus an episode on the man the crew is out looking for in the first place. Episode 6 sees the crew searching for Dr. Cole while Lena comes to grips with her father’s death. She is not handling it well and cries on the ship while the others are out searching in the jungle. Lincoln wanted to move her out by calling in a helicopter to get her out of there. However she says that they should follow up on a lead found in the camera footage of a place where Emmett was seen. They go to the Sahte water falls where Emmet was headed to find the Zulos, the magically healthy, possibly angelic Amazonian tribe that guards the Source.

There they find Russ Landry’s backpack with some tapes inside. The team heads back to the Magus to check out the tapes in which they find that at that point of time only Emmett, Russ and two camera crew – Rosetta ‘Rabbitt’ Fischer (Katie Featherstone from Paranormal Activity) & Manny are left alive. Emmett plans to go find the falls but Russ disagrees and says they should go back as they have very little fuel left. They come to fisticuffs and are separated by the other two. Emmett decides to go in a small boat accompanied by a dog they have befriended and later while in the jungle finds that Rabbitt & Manny have decided to join them.

At the falls they hear a song emanating through the jungle, a particular chord progression that seemed to have special significance, and find that it is a means of communication with the spirit. In the night while Manny turns in, Emmett & Rabbitt sit by the fire and she starts a mild flirtation with him, saying that she’s had a ‘schoolgirl’ crush on him. Emmett gentle refuses her advances saying that despite being separated with his wife Tess, he still loves her deeply. When they hear some noise later in the night, Manny finds a flayed monkey’s remains. Jahel warns the rest that the spirit, which she hears Emmett refers to as Il Tunchi, is not a spirit but a demon that comes to kill you! They crew takes a break during which Lena confesses to Jonas that she activated Emmett’s beacon remotely just so she could get people looking for her dad again, because everyone else had given him up for dead.

Back to the tapes and we see Emmett telling Rabbitt about a baby girl that Tess & him had before Lincoln and that the baby dies 1 week after birth due to a heart defect. Emmett had been planning to to settle down, sell the boat, buy a house and take an office job but after the baby died Tess canceled the sale of the boat and got Emmet out filming just so he had something to do, and eventually he had enough footage to pitch his TV show to a network. While they both were talking, Il Tunchi strikes again, blowing in a heavy gust of win and when Emmett & Rabbiit look for Manny they find his carcass – flayed and huge up a tree. This totally freaks Rabbitt out and although Emmett calms her down, she takes off while he was asleep, stealing away his rations, gear, and pack. All she left him were the cameras, batteries, and a solar charger and Emmett trudges on with just the dog for company. Emmett tries to call Lincoln using his satellite phone but the latter was barely able to hear him and had to leave to attend a class so the call was short. With no food he looks for fruit to eat but falls from a mango tree, breaking his ankle bone.

He uses twigs to tie up a make shift splinter and later becomes feverish and unable to find any food. Sickly & starving he looks at Sasha, the dog, and briefly thinks about killing & eating her meat. Crying the good doctor throws away the knife unable to kill his pet. Il Tunchi closes in with the whistling & the wind but this time Emmett is unable to whistle back and communicate and thus send it away; however the Zulos find him took him back to their village, patch him up, chant over him, and take him through the jungle and leave him outside the barbed-wire fence of an Amazonian research station full of jeeps and people in lab coats. This gives the crew a place that they can go to and they rush to find the station and reach it….only to find it completely deserted & devoid of people and the only living being they find is a healthy Sasha.