I guess you could say that I am fueled by coffee. I think I started drinking coffee at the age of 13 or 14. I tried tea for a while but I just never liked the taste that much and to this day I prefer black tea to tea with milk. So coffee it was and has been to this day. I usually drink 3-4 cups of coffee a day. That is if it’s in my big cup. If in smaller paper cups then it can be 5 or 6. I remember that I had once had 7 big full cups of coffee in day – by night I was so wired and strung tight, like a violin, that I couldn’t sleep at all!

So yeah, waking up is just a rubbing my eyes, going into the bathroom, washing my face and brushing my teeth – all the things that are necessary hurdles before that first cup of coffee. I get that in my favourite big black cup and come to my room, fire up the laptop and sit in my chair. I place the cup on the desk, wait till I log into my email and take that first sip – ahh! That’s life force surging through me. It’s like a suffocating person being able to breath pure oxygen once again.

My first cup is always with milk. Later in the morning I will get a second cup, which will be stronger, sweeter and black. That’s the one that decides how energetic I will be for the rest of the day. This one is usually drunk a lot slower. In the evening I have two cups; once again the first one will be with milk and the second black. The second one is usually after 7pm and that’s also the usual time that I do the majority of my blogging and I need the extra fuel. 4 cups is enough. I don’t think I need more than that but I do need that first one in the morning to properly wake me up.

The season finale (and possible final episode cause we know that in this shitty era, good shows need not last very long before they get cut while shitty crappy stuff gets to last for 9-10 years) should always leave us wanting more. It should end in such a way that we can’t wait to get to the next part “What happens, what are they gonna do, how are they gonna get out of this? etc etc should be on the lips and minds of the viewers and followers of the show. For the most part, The River‘s season one finale does do that job. If you were wondering how the show was going to continue on to a possible second season, then consider your questions answered. When I sat down to watch the episode last night, I was thinking “Ok, they’ve got Emmett Cole back and he is alive and well, so are they not just going to go on and leave the jungle area and go back home?” Hold your horses, they are not out of the fucking jungle.

So Emmett spends times with his wife in her bed, enjoying each other’s company, while everyone else talks about what they are going to do when they get back home. Clark feels he has enough for 8 really good episodes of the show (a pun intentionally on the real show) from all the footage and is eager to start working. When Emmett goes to the front of the Magus to speak with Lincoln someone sneaks into the captain’s cabin and shoots at Emmett with a shotgun. However Lincoln sees it just in time and pushes his dad aside only to get himself shot right through the throat. He bleeds out on the deck as Emmett screams for help and the people rushing in can only stand as Lincoln dies in front of them. The finger pointing soon starts and everyone looks at Kurt who denies it. Jahel later says that she knows how to bring him back. Every movie/tv series that deals with the supernatural needs Jahel – she is just an awesome source of information. Emmett refuses but a mother cannot bear to stand back and ignore a possible way for her son to be alive, so Tess takes Jahel into a hold below and the young girl speaks to Boiuna spirits she knows and does a ritual to bring Lincoln back alive – and he does come back!

Lincoln points the finger at Kurt and says that he saw the security expert shoot at him so he is hauled off to his room and locked in. Emilio tells Jahel that she shouldn’t have done it and seems a bit frightened of his daughter’s abilities. He tells that he is sending her to live with his sister in Montana where she is to continue her education but spunky Jahel steps up to daddy and tells him that she is staying put. Lincoln seems to have changed and his mannerisms seems different. While he is making a sandwich in the pantry, Jonas approaches him and they talk. Turns out it was Jonas who actually shot at Emmett, payback for leaving him to die in the jungle from the curse, and Lincoln just wanted Kurt out of the way. With one swift punch using some unnatural strength, Lincoln kills Jonas. 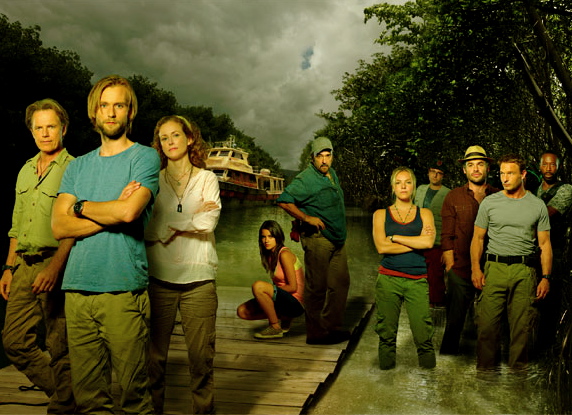 Lincoln is possessed by the spirit of the Bouina and a now freed Kurt lets on that he knows more about the demon spirit. With some help from Lena, Emmet manages to tie the possessed Lincoln down and attempts to extract the demon from within him. This part is creepy with Lincoln struggling and writhing away with and twisting his body, struggling to get free. He also speaks in a weird voice and taunts Emmett with family secrets and reveals the affair that Kurt has with his mom. His powers manages to push Lena to the ceiling of the boat and attempt to undress her. Yikes, this demon is kinky & horny! And creepy when Lincoln starts to sing Row your boat in a kids voice. Emmett tries to speak to the demon and make it leave Lincoln’s body but Kurt tells him that he will have better luck speaking to Lincoln as the demon can only be forced out by Lincoln himself. So his father starts pleading to his son, and cheesily enough, the demon is forced out by Lincoln’s will.

We see the form of the demon leave Lincoln and jump into the river and swim away. The family is united and the team settles down. They are about to reach the Boiuna area and on to civilization from where they will fly off to their respective hometowns. The crew just want to get away from there but they can’t find the spot where a helicopter is waiting for them at a village. However things don’t look to be where they should be. They use the mobile camera to fly up and they see that the river is changing along with the landscape, changing their path. The River is not letting them get away that easily!

Where will the story take us? What does the Boiuna have in store with the Magus crew and what does it plan to do with them? Will the show get a second season? I hope so.