Jessie Farrell is the redheaded all-Canadian country singer from Vancouver. I’ve been a fan of hers from her 2002, which was more folk pop than country but since then she’s shined on in her favourite genre. Her songs are sweet, fun and clap worthy and while the lyrics won’t stretch your brain cells, like 99% of most country songs, they are catchy. She may not be in the big leagues as far as country superstardom is concerned but she’s in my personal top 5 of female country singers. Love Letter is her 2011 release and her 4th album overall.

The opening number Catch Me is a dance inspired number, the lyrics are all about relationships with reference to dancing. This is a real bar or casual country ballroom dancing song at it’s best, with some clapping and footstomping. The title track, Love Letter is a straight mid-tempo ballad. It’s that wishing & optimistic style of love song but with a god mix of poppiness to cross over to a pop audience. The fun & frolic is back with the effervescence of Sunny Days. This song is all about the summer and the fun that young people want to engage in during those days. First single with a cool video Turn You Down is up next. It’s more rockier and probably one of my favourite songs of hers. I just love it when she sings in these style of songs.

Another ballad; well country songs are usually about love and heartbreak but I don’t mind it when it’s done well without a lot of pretension. Simple lyrics and feelings abound in Everything To Me. It works better in this version rather than the acoustic version I had heard on a tv show. You want more fun songs? The almost rockabilly Case Of Love aims to please and only asks you to grab your dancing shoes in return. Filthy Habits are about giving something up, changing your lifestyle for the best and making a fresh start. Lyrically it’s one of the more inspiring stuff that Jessie has sung. Making Ends Meet is about the struggles and the pains to do get by in life. Fall is another love ballad, about taking chances in life. The album proper ends with Love Never Ends, a mid tempo number.

We also get acoustic versions of her older singles Let’s Talk About Love, Fell Right Into You & I Guess. A nice enough album that’s easy listening and a pleasant journey into the life of Miss Farrell. I love her and her songs. Here’s the video for Everything To Me. 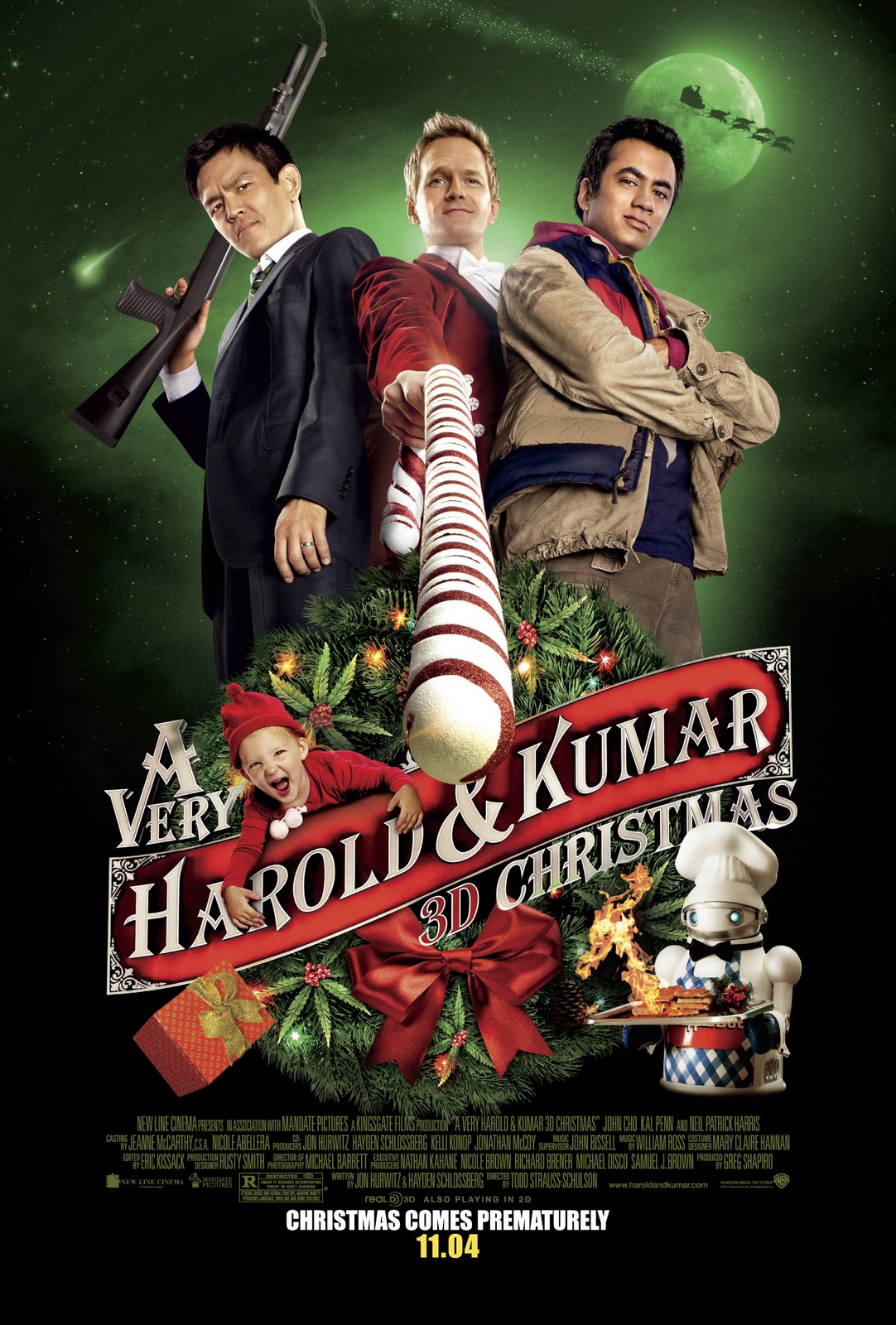 As much I loved the original Harold & Kumar movie and the sequel, I knew that this one wouldn’t be as good. For those of you who aren’t familiar with the duo, go check out Harold & Kumar Go To White Castle and Harold & Kumar Escape From Guantanamo Bay first. The second sequel A Very Harold & Kumar Christmas – man I just knew that bringing the Christmas stuff into a movie franchise I so loved was going to ruin things. Just what is it about Christmas – makes all these cheesy stuff bland and boring stuff?

Anyways, released last year in 3D, the movie is directed by Todd Strauss-Schulson and sees both John Cho and Kal Penn return as the awesome duo. This time however, a few years have passed since the events of the last movie and Kumar & Roldie aren’t friends anymore. They have lost touch and their lives have taken different turns. Harold is married to Maria and has a beautiful big house and is very successful in his job at Wall Street. Kumar has recently just broken up with Vanessa and he lives with little hygiene and has let himself go with no proper career. Vanessa comes over to see Kumar and tells him that she is pregnant with his child but they argue and she leaves.

Harold meanwhile has Maria’s rather large family over for Christmas including her intimidating father (Danny Trejo) who doesn’t really approve of his daughter marrying Harold. He expects Harold to make the perfect Christmas for him and has also brought a tree which he has grown for eight years and has deemed the perfect Christmas tree. Kumar gets a package at his apartment addressed to Harold (they used to live together) and decides to go give it himself. At the house the two old friends awkwardly talk and see that the package has a huge joint, which Kumar cannot resist. As he smokes it, Harold who quit a while back, knocks it out of Kumar’s hand and it falls on the tree which catches fire and burns. To replace it, Harold reserves one of the last decent Christmas trees available at a nearby lot. Kumar feeling bad about the tree goes out finding a replacement and ends up bribing the tree lot owner to sell him the last tree – which Harold had also booked. When Harold sees the car with the tree drive away, he chases it, and the car with Kumar’s tree crashes and blows up on the highway, destroying the tree.

As Harold & Kumar argue their respective friends Adrian & Todd are also at the spot, along with Todd’s toddler daughter. Adrian says he will ask the girl whose party he is going to for a tree she has at her place. At the party things get worse when the girl’s father, a reknowned deadly gangster Sergei Katsov, arrives and shoots up the place, chasing away all the guests. Harold & Kumar manage to escape along with everyone else, save for Todd & Adrian who hid in a closet but things get funny when Todd’s baby gets high on cocaine hidden there. Meanwhile Harold and Kumar are forced to go to Broadway, where they surprising find a still alive Neil Patrick Harris (he was supposedly killed in the previous movie) who can help them get a tree. Kumar also gets a waffle-bot, a secretly deadly one, which falls in love with them. It helps the two escape from the Ukrainian mobsters that Katsov sent to kill them. As they leave, an errant shot from Harold hits Santa Klaus in the ass and he falls out from his sleigh in the sky!

The two patch up Santa and they also patch up their friendship. Harold invites Kumar to his Christmas party the next day as they say goodnight. Kumar goes to see Vanessa  and explains he will stop smoking weed for the sake of her unborn baby and will re-take the exams to become a doctor. Harold returns to Maria’s house with her father waiting on the couch. The two argue until Harold explains he might not be the perfect son-in-law, but he is the perfect man for Maria. Maria’s father hesitates before accepting him into the Perez Family. The film ends with Kumar & Vanessa joining Harold, Maria and her family for a Christmas celebration while Santa smokes a bong and wishes us a merry christmas.

Cheesy, corny and messy in places, the movie still has some laughs but a lot of the stuff seem forced. This could very well be the end of the franchise. I wish it could have been better. 7 out of 10 and that is generous!

I’m putting this question out to everyone who reads this post? Let me know what you do remember in the comments section.

I remember my first day of school. A proper school; I went for Kindergarten i.e LKG in a teacher’s home and then to Upper KG in Carmel School Kuwait. I was 5 years old. I remember being so excited and could hardly shut up the day before and could hardly sleep the night before. I was totally wired & excited; if you had put an electric cable in me, you could have powered the entire tiny nation of Kuwait for that day. All homes, shops, stores, warehouses & offices included! That’s how excited I was.

I couldn’t wait to get into my new school uniform. The light blue shirt and the dark blue shorts. Socks, shoes and tie completed the ensemble. I was psyched to be with my older sister, riding the school bus with her and going to the same school as her. That was a huge thrill. On the way over to the school I kept standing up and looking out – are we there yet? Are we there yet? Driver – get to this school that I have heard so much about. I am beyond myself with excitement. I need to be in school NOW! And finally we did reach! OPEN THE DOORS! LET ME SEE THE SCHOOL AND GET IN! So I did ……….and then……………

What is this hell hole you have brought me to? My parents couldn’t have done this knowingly? How cruel? And why does my sister go to the school every weekday? Is she mad? What are the parents thinking? I cried and cried and how I hated the school and the classroom and the teachers who came in and the people around me. I hated the other kids in my class, who were also crying like me save one or two stupid dolts who were too dumb to know what was going on! The day slowly passed on by and I only stopped to have a break for some food and then cried again.

School’s out, we got into the bus, I met my sister with tears still drying on my cheeks. I came home, I had a snack and I watched cartoons. Night came by and I went to sleep. For sure this was a bad day and never to repeat again. The next morning – what? Surely you can’t send me there again? You can’t be serious! I don’t wanna go!!!!!