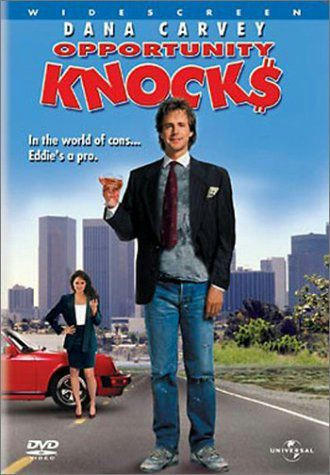 Dana Carvey is better known for his SNL roles and for being the funny sidekick Garth Algar in the Wayne’s World movies (which was also an SNL skit to begin with). Around the same time that I saw & loved Wayne’s World, I also happened to rent the movie Opportunity Knocks, starring Carvey. This movie came out two years before Wayne’s World, in 1990 and stars Carvey along with Julia Campbell, Todd Graff & Robert Loggia. I remember loving it so much that I would rent it once a month for a year, watching it atleast 3 times each time I rented it.

So Eddie Farrell (Carvey) and Lou Pesquino (Graff) are two con men who go from con to con and without having real jobs or aims in life. In the begining of the movie we see them con a businessman who thinks he ran his car into Lou and he gives him some money, an expensive watch and diamond ring to keep him from suing him. Eddie is also at the scene as a concerned & informative witness. They need to pay off Pinky, who works for local gangster Sal Nichols and try to con tv & stuff from a family only for it to fail and they getting chased by the karate loving kids. They then break into a nice big house and find out that the owner has gone to India and his best friend who was supposed to house sit for him, can’t make it as he got a good business deal elsewhere.

Eddie & Lou take this time to enjoy themselves in the lavish house, with a well stocked fridge. They sell some of the items in the house to get $700 to pay Pinky but when he kicks them out of the bar they were in, the two steal his car. Only thing is, it’s actually Sal’s and he is mighty pissed. The two friends ditch the car which is later ransacked. Sal sends goons to get Eddie & Lou as there’s $60k missing from the car. The two friends run away and split up with Eddie hiding out in the big house. The next morning the owner’s parents, Milt & Mona come to the house and see Eddie, mistaking him to be the friend Jonathan Albertson and they invite him for lunch. Eddie goes along with them, thinking he’ll get to spend some time with the rich family. He also meets their daughter Annie, a doctor. Since Jonathan is supposed to be a financial & marketing whiz, Milt asks him to take a look at his company’s sales charts. Eddie manages to lie his way through and is later asked to join as VP of marketing for the bathroom fittings company, which he accepts.

Eddie decides to run a “love con” on Milt’s daughter and takes advice from his uncle and aunt, with Lou acting as his/Jonathan’s stockbroker. He charms Annie and even manages to make her fall in love with her. He also wins a big contract for the company using his street smarts & cons and endears himself to everyone. However Sal catches up with him and kidnaps Lou for the cash. Eddie steals $180,000 from Milt’s safe to save Lou and then decides to trick the gangster. Using the help of Lou & his aunt & uncle (with the uncle posing as a city council president) they trick Sal into signing a fake contract to demolish a building using Sal’s demolition company and get more than the money Eddie gave Sal as a payoff. Sal blows up the building and is arrested and sent to a long term in prison. Eddie’s uncle, aunt & Lou plan to leave with the money but Eddie refuses to do so. He takes the money he stole from Milt, goes back to them and confesses. He leaves a devastated Annie and her family behind. The son also returns by now.

Milt is also sadden and sees that Eddie returned a gift he was given – an expensive, signed baseball. Days pass and Annie refuses to speak to Eddie but he runs a final con – running into a car driven by his uncle & Lou! A concerned Annie goes to him and forgives him and the two make up. It’s fun, silly, light hearted and worth enjoying many times over. 8 outta 10!

Sadly no, I don’t listen to the radio anymore. To be honest I wasn’t a big time radio listener. I remember being a kid growing up in Kuwait, my sister would record songs off some program on the radio onto cassette tapes. I dunno or can’t remember how often these shows were but I do remember recording a 1986 New Year special. We recorded all the songs on it and played the tape many, many times over the next few years. We settled in India in 1987 so that would have been the last such major recording we had from Kuwait. All the 1986 hits by artists like Madonna, Sade, Culture Club, Bon Jovi, Europe and Status Quo’s In The Army Now was on that tape.

Remember Tarzan Boy & the original “you spin me right round” song? That was on there too. So back in India we didn’t get cable tv until 1992 (cable tv as a whole entered the Indian market only in 1991) but there weren’t any decent English music channels run in our area. The odd exception was a 1 hour program on Sunday afternoons, which was a pseudo request show – the DJ had a limited set of singles to play from and he would always stick to that list. I remember sending in a request once and my sister & two cousins had also sent in a request for my 15th birthday. All the BBC had this weekly music program that I used to tune in to quite religiously.

Once cable tv came in to the picture and we got MTV & a couple of years later Channel V (this were during the years that these channels still played music videos and live specials) and the channels that showed tv series & movies, any thoughts of a proper radio channel quickly dissipated. For many years I never even entertained the idea of even trying to tune to radio station broadcast. It wasn’t until 2003 and when we got this World Space setup, did I start listening to radio stations. I tuned into classic rock, alternative, current rock, blues, contemporary charts and classical channels for a while. Relaxing with a good book and listening to songs in the background was very welcome, especially when tv channels became crap. Still the radio was only something I listened to once a week for a couple of hours on a weekend.

I think I can safely say that since I got broadband at home, (Sept 2006) I’ve listened to a couple of rock channels on internet radio for perhaps 2 weeks before I gave that up. I concentrated on getting more & more music and expanded my mp3 collection and that is like a radio station for me. I don’t think I will ever buy a new radio or listen to a radio station channel again. I don’t see much need for it.