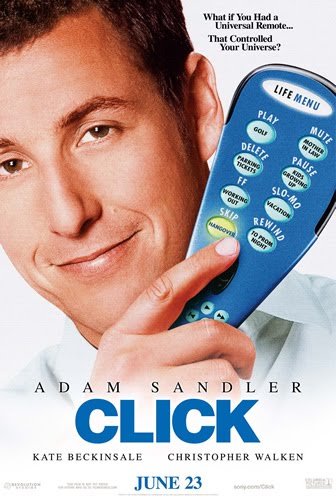 Ah the dream of a lot of us grown up men in our 30s! No not a wife as cute as Kate Beckinsale, although that is a nice dream as well! But a universal remote control that could control your universe as well! That’s exactly what this movie is about as an overworked architect who neglects his family and misses most of his life when he receives a remote-control device that enables him to skip over unpleasant events. Frank Coraci directed this movie written by  Mark O’Keefe and Steve Koren and starring Adam Sandler, Kate Beckinsale, Christopher Walken, sean Astin, David Hasselhoff & Henry Winkler.

So Michael Newman (Sandler) is our overworked architect who readily sacrifices family time to work in order to be able to give the a good life to his wife Donna (Beckinsale) and two kids Sam & Ben. His overbearing boss Mr. Ammer (Hasselhoff) makes him work extra while dangling the possibility of making partner in his firm. One night Michael goes nuts over the number of remote controls in his house and goes to buy a universal remote at a huge store where he meets a mad scientist kinda looking clerk named Morty (Walken) who gives him the remote control but warms him that it can never be returned. To Michael’s initial shock he finds that the remote can control time!

Mike uses it to skip fights with Donna, go forward until he rids himself of a cold, and skip a family dinner to work. Morty tells him that while skipping an event his body is on auto-pilot, only his mind skips time. Mike skips ahead a few months to when he gets promoted to partner with Ammer but finds that he has missed a whole year of his life. He also finds out that he is in marriage counseling and missed the death of his dog, which he is quite sad about. He then sees that the remote is programming itself to his previous commands and finds that the remote fast forwards without him controlling it. During a conversation with Ammer Michael reveals that he wants to be CEO of the company and the remote fast forwards 10 years in the future to 2017 when an older Michael is CEO but he is also obese, lives alone, divorced from Donna and his kids don’t talk to him! He goes to see his old house and fights with Donna on seeing her new boyfriend and ends up knocked out by the new dog.

The remote fast  forwards another 6 years and he is in the hospital; Donna reveals he has cancer and also subsequently suffered a heart attack as he ate so prolifically during chemo (as his body was on auto pilot). Michael is no longer obese thanks to liposuction, Donna has re-married Ben’s old swim coach, Bill, and Ben has gone into his father’s line of work. When Mike goes to see Ben, he learns of his father’s death and cries over not being there for his last moments on earth. Michael uses the remote to view the last time they spoke. While on auto-pilot, Michael angrily rejected Ted’s offer for a night out with him and Ben. Morty, who reveals himself to be the angel of death agrees to show Michael a happy time and fast forwards a few more years to Ben’s wedding. There however he suffers a second heart attack when he hears Samantha call Bill “dad” and is rushed to the hospital. Michael’s family arrives and Ben reveals that he has cancelled his honeymoon in order to work on an important deal that will keep his business going. Not wanting Ben to make the same mistakes as he did, Mike rushes after Ben and collapses. He manages to convince Ben that family comes first and tells his family that he loves them. Morty arrives to take Ben away and he closes his eyes. A white light flashes – and Michael wakes up to the present time! He was asleep in the store where he had gone to buy the remote!

Was it all a dream? Believing it to be so and a life lesson, he happily rushes to see his dad & mom and tells them that he loves them. Then he goes to spend time with Donna and the kids to celebrate. At home, he sees a note from Morty – which states that Morty knew Michael would do the right thing this time, and realizing he actually experienced the events, he throws the remote in the trash and goes to restart his new life with his family.

Funny in a lot of ways, the latter half is most sad and it made me sad too. I liked this movie a lot. I thought Sandler did a swell job in his role and preferred this to his usual antics. There is still some typical Sandler grossness like when he pauses his boss and farts in his face. LOL! 8 outta 10!

I think it would be great to be a kid born in recent years. The kids these days have it so much more easier and better than we, that’s my generation, ever had. But isn’t that true for each generation? What I see is that the kids these days seem to be more clever and more in tune with what’s happening around them. It’s just the way things are setup for them. Don’t you think it would have been great to have high speed internet at your fingertips when you were a kid? Think of all that time spent in books and encyclopedias and dictionaries when you could have easily done your tasks and researches on your laptop if u had one as a kid. That would have blown my mind as a kid.

Being able to watch my fav tv shows an stuff online in the comfort of my own room when I was a kid. No fighting for the remote cause you want to watch Star Trek, while sis wants to watch a dance program, dad wants to watch the news and mom wants to watch a soap serial! That would have been great to be able to have. Catching up on sports scores & news as a kid would have been really great. I had to wait for the weekly sports magazine that I subscribed to from the ages of 12 to 16. Also all that music. The late 80s and early 90s were a great time for music in general and I would have love to catch up with my favourite rock bands online and watch their music videos and live clips online. I never dreamed of a home computer, a laptop or an mp3 player during my childhood!

I never even thought about cellular phones until the mid 90s when I started noticing them on tv shows or movies. I was 20-21 when cell phones were launched in India and at that time only rich businessmen and highly paid executives could afford to own one. The outgoing & incoming call rates were expensive. I could afford to get a pager for work but not a phone. It would take me until the age of 27 (2003) to get a cell phone because of work & money issues. Kids these days are getting phones at the ages of 7 or 8 and are experts at it by 10! They use ebook readers, tablets, laptops and smartphones and listen to music on the go. Can anyone of us in our 30s & 40s say that we even dreamed it to be possible?

Kids have it so good these days. They have so many advantages. Well atleast their cartoons suck! Big time. We had such wonderful cartoons on tv that will always resonate within our hearts but the cartoons these day ~ :P HOLY SHIT!