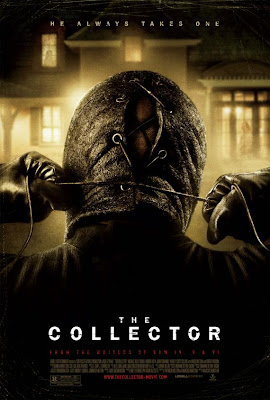 Much like in the vein of the Saw franchise, The Collector is a torture porn (dare I say that) film that promises to keep you on the edge of your seat and will get your heart pumping & racing until the end credits. I had heard so much about it that I had raised the film to a high pedestal and had really high hopes for this movie. Well it came crashing down in pieces. The written by Marcus Dunstan directed movie has both him and Patrick Melton writing the script and I must say a big disappointment after all that building up. The only time my heart raced was at a little topless scene that had me appreciating the ‘talents’ of a young actress, who rather seemed to be enjoying that bit of nudity.

The movie stars Josh Stewart, best known in his roles in the tv series Dirt & Third Watch and in his recurring role as JJ’s husband in Criminal Minds, along with Michael Reilly Burke, Andrea Roth and a single scene for Daniella Alonso (Hills Have Eyes 2, Wrong Turn 2). The movie starts out with a prologue – a middle aged man and his wife(?) come home after a party and start groping each other. The wife goes up stairs and is followed slowly by the husband but there is a maniacal killer in this house. The wife shouts for the husband when she see a box that wasn’t there earlier and when it moves the husband opens it up – they don’t show what is inside but a masked figure comes up from behind and grabs him. Cut to the main part of the film – Arkin is a flawed yet affable chap, working carpentry at a rich family’s large mansion. We see him interacting with the cute younger daughter as she invites him for a ‘tea party with her dolls and when he is outside having a smoke, the older daughter asks for a cigarette.

Arkin decides to rob the house of a large gem that they have in a safe as his wife’s gambling problems have left her with a large debt and the loan sharks are calling it in. So he assures his young daughter & his wife of being safe and then goes to the house which is supposed to be empty. However he finds that the mysterious killer has tied up the husband and wife and booby trapped the whole house. The older daughter being out with her boyfriend is safe and the younger girl is no where to be found. Arkin avoids the killer and tries to help the wife but on seeing her dead husband’s mutilated body, she freaks out and runs right into the knife of the killer. Arkin finds the box from the first scene of the movie which now contains the middle aged man. The tortured victim tells Arkin that the killer enters a house and lays traps for a cat & mouse game with his victims. He saves one person for future torture and locks them in the box while he kills off all the rest. The killer also uses a large & vicious Alsatian to guard his victim house. Arkin leaves the panicking man in the box and tries to find the younger daughter.

Avoiding the hidden numerous death and snare traps all around, he has the girl hide, while he tries to find a clean way out. However in the rain outside, the older girl comes home with her boyfriend and start making out on the kitchen table, being watched by the killer. This is the bare boobed scene I mentioned earlier and yes, Madeline Zima who plays the girl is stacked. Ok, so the killer kills both of them but the girl manages to dial 911. The Collector kills a lone cop, with the help of his mutt, who comes to check up on the house but not before he sent a message to dispatch. Akrin manages to get the upper hand and injures the masked killer and runs out with the little girl and sees the house burst into flames. They make their way to the road where Arkin is hit by a car. Dazed he is helped onto an ambulance while the cops take the little girl away. However the collector still lives, having left the house before the explosion. He crashes into the ambulance and kills the driver & the medic and drags a screaming & kicking Arkin into the box and drives away.

What is the motivation behind the Collector? Who knows and what’s with all the booby traps and shit? This movie is for the torture type movie fans only but why bother when you have Saw. 6 outta 10!

There is a hatred in me regarding the people of my state  the rest of India on a particular matter. And this concerns the female population a lot more than the male population. And my bit of advice to the girls & women in my state is – if you cannot follow through on a romance, do not fall in love & start one!

In Kerala, like most of India, arranged marriages are the norm although that is changing and you see a lot more love marriages. But still a vast majority of marriages are decided by the parents of the groom & bride. In most cases the groom & bride have the final say that yes they would like to get married to the person that their family has found for them but in some cases, that isn’t so. For many years I have marveled at the bitches who fall in love with a guy, start a romance for a couple of years knowing fully well that their family is not going to agree to let their daughter married to the guy of their choice. In some case the parents say that the girls cannot choose and in some it’s that the parents do not approve of the guy and hence they girl cannot marry him. Whatever the reason, the girl in question should know that come hell or high water, her parents are not going to allow her to get married to a guy that they themselves have not screened and selected. By screening I mean – religion, caste, family, financial status, social status, boy’s reputation, family’s reputation, boy’s job, possibly even the marital & financial status of his siblings & their spouses.

I have seen it happen so many times. They meet and become infatuated while in their late teens or early 20s, usually in a college. It can sometimes be at their first entry level job too. They start hanging out in the same group and then exchange cell phone numbers. They have their time alone in college or the office. They talk at all times on the phones but in especially the girl’s case, she does it in secret. She will talk on the way to the bus stop from her house, in the bus, on the way to the office or on the way back home. Once she reaches home the calls stop in front of her family, until she can find some time alone in her room. They talk late till night, risking sleepy faces & tired eyes the next day but it’s all for love, right? Yet when the time comes for marriage, she hesitates and then then approaches her folks timidly. They are appalled and say no. Father even threatens physical abuse. Mother feigns a fainting spell and an appeal to her “god – where did I go wrong?” Father might fall sick and either parent might get a symptom or two of a heart attack (just like in the movies in India). Then the girl calls the guy – “I cannot go against the wishes of my parents! We cannot be together!”

The guy – fucked! I thought this stopped a few years back but I still see cases like this every few weeks or so. Someone I know or used to know or someone who is related or known to someone I know or related too! I came to know of 2 such cases in the last 10 days and another related case which happened to my cousin. Next post will focus on such cases. One more thing I have to say is that the ease in which is it to get a cell phone and cheaper rates for calls & SMSes are to blame for a lot of “romances” in blossoming. Possibly these girls are bored and want some entertainment until their parents find a “suitable” match for them!