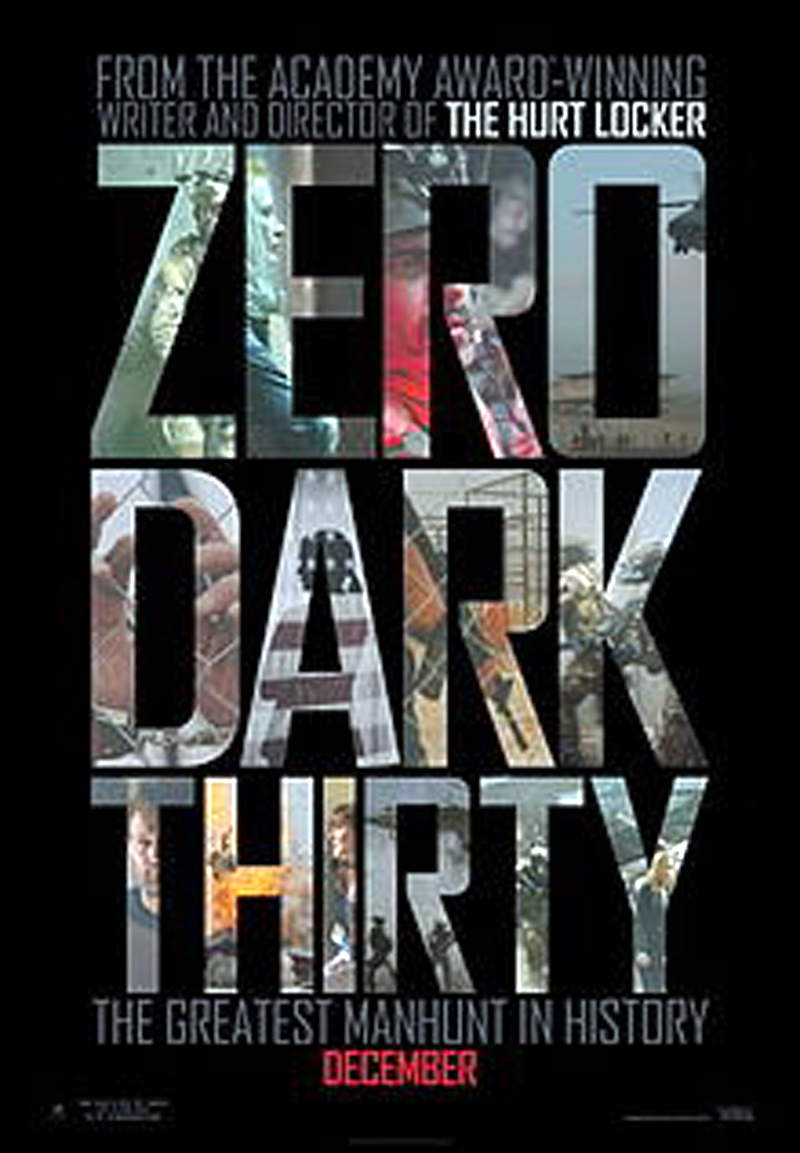 I finally got round to seeing one of the big Oscar contenders of the last Academy Awards – Zero Dark Thirty. This movie is director Katheryn Bigelow’s tribute to the “biggest manhunt in history’ (or American history). The film dramatizes the United States operation that found and killed Osama bin Laden, leader of al-Qaeda. It was produced by Boal, Bigelow, and Megan Ellison. It stars Jessica Chastain ably supported by a large cast including Jason Clarke, Joel Edgerton, Chris Pratt, Jennifer Ehle, Mark Strong, Kyle Chandler, and Édgar Ramírez. It was independently financed by Ellison’s Annapurna Pictures.

The movie was nominated for 5 awards at the 85th Academy Awards including Best Picture, Best Actress (Chastain) and Best Original Screenplay and winning for Best Sound Editing. Before I continue I must say that as far as I understand, this is not an exact play of events but based on what the movie makers have gotten from parties involved – and I must say that it must be from various sources – and therefor is at best a fictional movie based on actual events. The main character Maya is based on, mainly one CIA agent but also on other women involved in the operation. She is a staunchly determined, completely one tracked minded and passionate about her job at hand – collecting solid intelligence and analyzing the data to find and apprehend Osama Bin Laden.  As the movie starts, the young agent initially is disturbed as she observes first hand the torture-investigation of a a detainee with suspected links to several of the 9/11 hijackers. This is the most difficult scene to watch – as the interrogator humiliates the detainee and subjects him to waterboarding. However later on, as she “matures” Maya interrogates Abu Faraj while her colleagues torture a man who has been getting message from Bin Laden & his courier Abu Ahmed.

During a span of five years, she survives the 2008 Islamabad Marriott Hotel bombing as well as being shot at in her car by armed men. Neither event detters her from her aim but she is told by her superior that now that she is on the “list” of American nationals to be killed, she has to go  back to the US. While waiting for an informant, Maya’s fellow officer and friend Jessica is killed in the 2009 Camp Chapman attack, when it turns out that the informant was a double agent has been armed with a suicide bomb belt that he detonates. When a Jordanian detainee claims the man previously identified as Abu Ahmed, from a photograph, is a man he personally buried in 2001, several CIA officers – Maya’s seniors – conclude the target who could be Abu Ahmed is long dead, and that they have searched a false trail for nine years. However Maya’s colleague researching Moroccan intelligence archives comes to Maya and suggests that Abu Ahmed is alive and that his brother, with whom he shares very similar features, was the one buried. Abu Ahmed is tracked while using his phone an driving in his vehicle & numerous CIA operatives are deployed to search for and identify him. They locate him in his vehicle and eventually track him to a large urban compound in Abbottabad, Pakistan, near the Pakistan Military Academy.

The final third of the film is the actual operation after several months of surveillance, during which Maya gets very frustrated. The raid is approved and is executed on May 2, 2011. Although execution is complicated by one of the helicopters crashing, the SEALs kill a number of people within the compound, among them a man on the compound’s top floor who is revealed to be bin Laden. I may have to watch that scene again but the SEALs kill a couple of unarmed women as well but I guess that is something you have to expect. hey bring bin Laden’s body back to a U.S. base in Jalalabad, Afghanistan, where Maya visually confirms the identity of the corpse. Maya is last seen boarding a military transport to return to the U.S. and sitting in its vast interior as its only passenger. The pilot asks her where she wants to go but she does not reply and instead begins to weep quietly.

To be honest, although I appreciate the film, I was also bored to tears for most of it. I do not usually like American war movies/military movies as such but I had hoped that this one would be more entertaining. Does Katheryn Bigelow only do war movies? And this is the second movie I’ve seen of Jessica Chastain and both are in search of a famed bad man. 7.5 and that is a grudging 7.5 outta 10!

A new science fiction show which I had only heard about a month before it premiered – I must be losing my touch. Defiance is the new original tv series from SyFy (and I’ll stop there; we all know what I feel about this channel) that is aimed at the majority of science fiction buffs but is also a political drama and action oriented show. A joint American & Canadian production the tv series is developed by Rockne S. O’Bannon (the guy behind Alien Nation & a beloved show of mine, Farscape) and stars Grant Bowler, Julie Benz,  Stephanie Leonidas, Jaime Murray, Tony Curran, Graham Greene, Mia Kirshner and Fionnula Flanagan. Take a moment to relook at some of the names – Greene, Benz (from Angel), Flanagan and Curran!

The show is set in the future – supposedly aliens known collectively as Votans have come to Earth seeking a new home after their star system was destroyed in a stellar collision and find the planet, which they had thought to be uninhabited, filled with humans who respond to them with hostility and suspicion.  The Votans are not a single species, but a collection of seven different alien species who evolved on separate planets in the Votanis star system. The different races banded together to flee their star system when it was destroyed in a stellar collision, and ultimately arrived at Earth. The Votanis star system was destroyed in a stellar collision 5,000 years ago, but the millions of Votans who fled in ark-ships made the long interstellar journey in hypersleep. A limited number of Votans are allowed to settle in a colony in Brazil, and eventually two other colonies, but millions of Votans remained in hypersleep aboard their ships in orbit as negotiations dragged on with Earth governments for full-scale settlement. Tensions rose for ten years, but the Votan and human governments were on the verge of negotiating a peaceful settlement, when in 2023 the Votan ambassador to the United Nations was assassinated by a disgruntled human supremacist on live television outside of the United Nations Headquarters in New York City. This sparked a disastrous global conflict between humans and the aliens known as the “Pale Wars”.

The wars tore apart the planet for seven years, until their culmination in 2030 in the apocalyptic “Arkfall” event, when the Ark fleet in orbit mysteriously exploded. The aliens think a rogue human commander was responsible, while humans suspect it was an alien weapons experiment gone awry. Millions of Votans died in hypersleep. During the Arkfall, destroyed Arks rained down on Earth and accidentally released terraformer technology. While the Votans had intended to use their terraforming technology in a carefully planned manner, the Arkfall haphazardly unleashed chaotic and radical changes to the biosphere and even the geology of Earth, making the planet dangerous to both humans and the aliens. The earth was scorched, chasms opened in the ground, new mountain ranges were raised, and the surface of the planet was covered with dust and debris. Animal and plant species from the Votan star system were introduced to Earth, and both native and alien animal species were horribly mutated by the uncontrolled terraformer technology, creating bizarre and dangerous hybrids and new species. Within a few months, the Pale Wars wound down as both sides had fought to the point of mutual exhaustion, and a ceasefire was declared. Few organized governments remained for either the humans or the aliens, and both sides factionalized as their members began looking out for themselves. In several areas, local human and Votan militias began to band together when they realized that they had to cooperate if they hoped to survive on this new, almost alien planet.

So in 2046, 33 years after their arrival, we have humans and the Votans – Casthithans, Indogenes, Irathients, Liberata, Sensoths, Gulanees and the straightforward villainous Volges in varying numbers, surviving on a planet that is alien & not really suitable for any of the races. Scavengers Joshua Nolan and his adopted Irathient daughter Irisa Nyira are on their way to a better life in Antarctica when they are ambushed on the way by a gang of Irathient. The two escape from them and Nolan hides a glowing hexagon device in the dirt out in the woods and they make their way to Defiance, a city where St.Louis used to stand. After patching up the injured Irisa, Nolan befriends the local bar owner/prostitute, Kenya Rosewater, and goes to a fighting ring in the back of the bar, where he fights and defeats a Bioman ( a huge fully synthetic, sentient life-forms used to fight the war) and wins big. He runs into one of the town’s leaders,  Datak Tarr, a Castithan who takes away some of his winnings. As the duo stay in the town at night, and while Nolan has sex with Kenya, the oldest son of Rafe McCawley, the owner and operator of “the largest mine in the territory, is found just outside the walls of the city. Nolan offers his expertize as a tracker during the war and his investigations uncovers a traitorous Indogene who worked as town mayor Amanda Rosewater’s assistant.

During a scuffle in the bar the town’s Lawkeeper (sheriff) is killed by a errant bullent as McCawley fights with Datak Tarr, who’s son is McCawley’s daughter’s lover, and is the initial suspect of her brother’s killer as the two had clashed often. With the mayor’s assistant setting a bomb to destroy the tower that controls the protective shield grid around Defiance, the town is in peril as an army of Volgee are headed their way. With Nolan stepping in to help Amanda and the town, they successfully defeat the Volgee using the hexagonal device that Nolan had stashed away – which is a powerful explosive weapon. The next day the town’s folk picks up after the battle, having lost a few of it’s citizens but gained a few – Irisa Nyira had managed to get the gang of Irathients to help out. As Amanda recovers from her wounds, she passes the Lawkeeper’s badge to Nolan, who decides to stay in Defiance along with Irisa.

Thus ends the pilot – a scifi western drama that reminds you some of the American Westerns and some of the overall themes in other scifi shows. The short lived Firelfy and Terra Nova comes to mind. The show also has O’Bannon’s look & feel all over it; Farscape fans would feel at home here. Having said that I am some apprehension as to how much interest can this show maintain? And I am not convinced by some of the cast, especially Grant Bowler as Nolan. Is he enough to lead the show? We’ll find out in a few weeks.