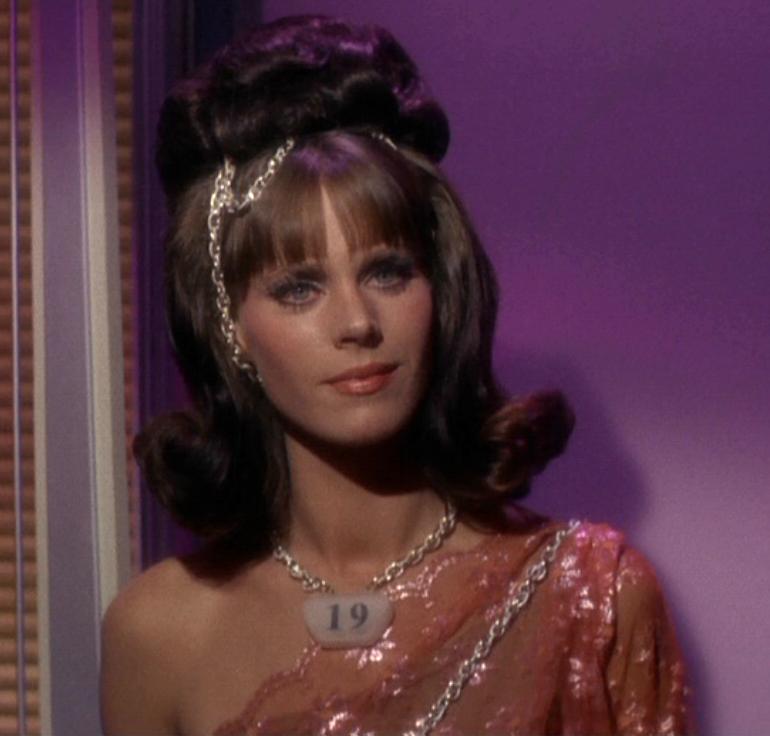 No, you are not seeing double and no you are not drunk. After all, I did title it as TOS Women 16 & 17! Yes, it’s two women for this entry and it’s special because they are twin sisters.

Episode 12 of Season 2 I, Mudd sees an android named Norman, disguised as a starfleet officer, making his way onto the USS Enterprise after having forged his records and arranging the transfer. The powerful android is too much for the human officers and he jams the controls after changing their heading – the destination is a  planet which has never been charted. Once there Kirk, Spock, McCoy, Uhura & Chekov are forced to beam down to the planet where they meet the ruler of that planet – Harry Mudd! Mudd is surrounded by androids, who for the most part are a slew of beauties – 500 in the Alice class alone. He implies that these androids can provide for him anything he wants. Mudd goes on to explain his presence on the planet and tells them that he had been sent to prison by Kirk and company after his last appearance. After his escape, he had been employing himself by illegally reselling patents. He was caught and sentenced to death on Deneb V; fortunately for him he was able to steal a ship and get away. After drifting aimlessly for a while, he found himself on his planet. The problem is, of course, that he has gotten bored, and the androids won’t let him go. Kirk and his crewmates are there because he told the androids to go and get a starship, so the crew could stay and he could leave. He declares that Kirk must stay for the rest of his life on the planet, now also named Mudd, along with the rest of his crew in order for him to go free. 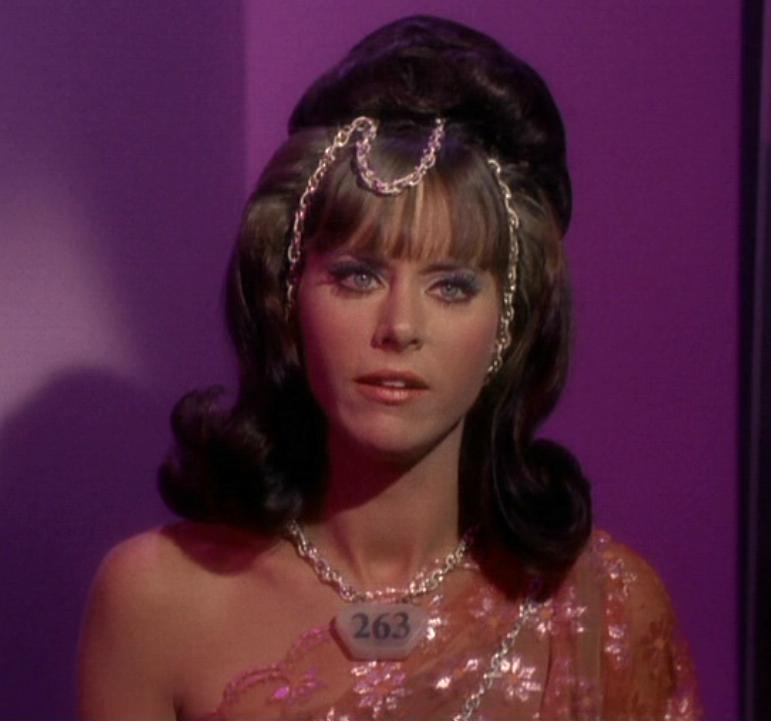 The androids then reveal their plan: to “serve” Humans until they will become completely dependent upon the androids. They refuse to let Harry leave and intend to keep the entire crew there as well. In a hilarious scheme, the Enterprise crew realize that they must use insane logic to get the better of the android and confuse them. The more confused an android get, unable to comprehend the insane logic, they will eventually short circuit and shutdown letting the humans a chance to leave the planet. Elsewhere, Spock tries to nerve pinch another Alice, but it has no effect. He then causes two other Alice androids to freeze up by telling one he loves her, but the other he hates her. The androids can’t deal with this, as they are identical – it is illogical to love one and not the other :). Finally all  the android and Normal, the leader, is shutdown and reprogrammed from the main system so  that the crew are allowed to leave. However Mudd is paroled on the planet – he will be safe as the androids will provide for his every need but Kirk & crew reset the android that resembles Harry’s wife and create many more of her which will harass and annoy him for th duration of his stay on the planet.

The Alice series was a group of five hundred identical androids who inhabited the planet Mudd. They were designed according to Harry Mudd’s “exacting” specifications, and was the primary liaison between the vast android population and the crew of the USS Enterprise. Playing the parts of the pretty Alice series of androids are twin sister Alyce & Rhae Andrece. Alyce is the first pic and Rhae the second. Show Creator/Producer Gene Roddenberry had been in a panic because he needed at least two female identical twins and couldn’t find any. That night, while driving home, he saw the Andrece twins walking down a street. Roddenberry literally pulled over beside them, jumped out of his car and told them that they were going to be on television. Alyce & Rhae had brief careers as actresses; their only other apperances were in an episode each of Bonanza, Batman, and in the 1970 film Hell’s Bloody Devils. The sisters also performed as singers in a band called The Third Eye in an episode of The Name of the Game. They were also singers in a jazz-pop group of the late 1960s called The Sound of Feeling.

“They sat shoulder to shoulder on the beach, willing the sunset to last just one second longer…”

Having waited for so many years to see each other they still had just until darkness falls to be together. Despite all his efforts and her hoping for the outcome that they both wanted so much, it had all come down to this. She was to leave with her family at noon the next day to a city so far away and so foreign to both of them. She couldn’t say no and stay back; her father having just recovered from a heart attack a few months ago had now got a good job, one that would be less stressful and taxing on him and the money that he would make would be even better than anything he had ever made in his entire life. To support her father’s decision, her mother had decided to uproot her small but successful business and already setup shop in the new city along with a relative of theirs. Her mother had moved most of her belongings in advance and the oldest son had joined her a week earlier. She and her younger sister & brother stayed back with their father. All of the previous month her father would keep saying that this was a bright new start for their family and that they could put all their troubles behind them in this coastal town which had brought a lot of bad things to them as a family. Besides she was only turning 17.

Each time he said that and the two younger children nodded in agreement, unaware of the turmoil that was going through their sister’s mind as the family sat down for dinner and while the other 3 ate with gusto and talked about their day with smiles, she was busy with her thoughts. Yes, it was a great move for her family and her dad in particular. But she didn’t hate the town; in fact she loved the place and she loved the ocean breeze. Leaving the town would mean leaving behind everything she loved including –  him. She remembered the day they both met 2 years ago, in History class. They both shared a passion for the classes and loved to discuss and debate about events from history and the great wars. They argued about kings & queens and civilizations and some where between a debate on The French Revolution and a reading of a new book, they fell in love. It was first love for both of the 15 year olds and they fell hard. Although they didn’t believe it, they would joke that the were lovers from a distant era reincarnated and destined to be together again and will always be together for generations to come. Her favourite time was after school when both of them would say goodbye to their friends and walk to the fast food place near the ocean and order milkshakes and talk to each other for a couple of hours.

But now that was all about to end. She should be back home, the house her family would call home for just a few more hours, and finish her packing. She was almost done and then she’d have to check and see if her younger siblings hadn’t forgotten any of their belongings that needed to be packed and then sit down with them and her father for that last dinner at their home. The mood would be upbeat as her siblings were also very excited for the move and especially the fact that they would each get their own rooms in the new house. Her dad would smile and dote on the kids as they ate dinner and watched tv till 10 pm when he would insist that the kids get a long rest as they had a 2 day car trip ahead of them. And then in the morning after showers & breakfast, they would wait for the men to come and help them load the heavier stuff into the trailer and then their father would hand over the keys to the realtor and they would say their goodbyes to the town. A town which only she liked in her family. She would be saying goodbye to a lot of good friends but especially him. And her heart ached as she & he knew that they might never see each other again.

Just a minute or two more and the sun would have totally set and it would be dark. He held her tight to him and she kissed his cheek and they cried tears of sadness. One final word – Goodbye!