The last two Tuesdays I’ve been with my mother as she had to go to two different hospitals for her medical issues. Both times it was very different experiences.

Last week it was to Amritha Medical Institute in Cheranellur for a scan on her right knee as she has been plagued with rhematism for a while. She was seeing an ayurvedic doctor but as she wasn’t finding much relief they suggested to go and see a well reputed doctor of western medicine in Amritha hospital. To see this doctor is very difficult as he has an excellent reputation and he gets patients coming to see him from all over South India and hence getting an appointment fixed to see him is difficult. Anyway we had to get the scan done first and had to leave at 7 am from home via a taxi to reach the hospital at 8 am. When we reached there we found out that the booking for the scan was mixed up and we had to register again. It would take us till evening just to finish the scan and then get the report. So we were forced to make a day of it, having breakfast (just a bite and a drink of bottled mango juice) from the hospital canteen and waited till 1pm for them to call my mom and have the scanning of her knee done.

As it would take 2.5 hours to get the report we left for my uncle’s house in Thrikkakara and bought some biriyani along the way and had lunch at his house with him and my aunt. We spent some time visiting and then came back to the hospital by 4pm and by 5pm we were outta there with the report in hand. The follow up with the doctor will take place on the 30th of June.  Compare that to this week when she had to go to her oncologist for a regular visit & check up which is done every couple of months. That was at Krishna Nursing home which is a much smaller hospital about 20 minutes away from where we live. We went there and the waiting room was empty except for a handful of people. She was #16 but we didn’t have to wait long. As two other doctors were on leave there were no patients to see them as well and hence that section of the hospital had a deserted look. I went to get a coke and a bite to eat as I hadn’t had any lunch and that took about 20 minutes. 10 more minutes and her check up was done and we were on the way back home. No hassle, hardly any waiting time and hardly any crowd making a lot of noise.

Compare that to Amritha – 2 hours in a large waiting room just to pay for the scanning and another 3 hours till the scanning was done. Then another hour in the waiting room for the report to get to us. Lots of people, kids running about, sick people being taken in beds or wheelchairs, people on the phone speaking loudly, doctors, nurses & orderlies rushing between wards & floors! Totally different experiences. 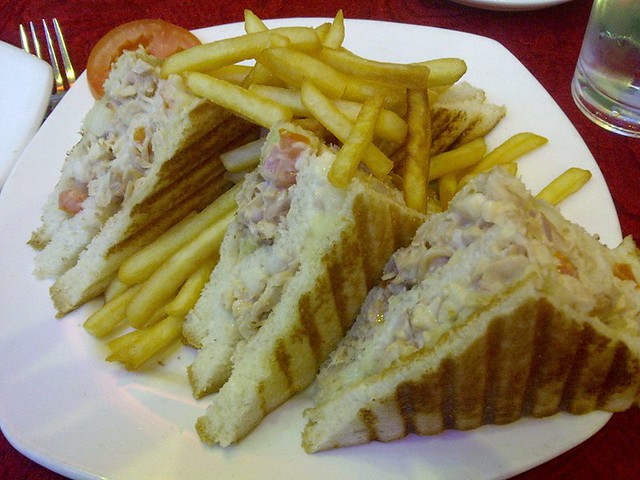 It’s been a long time since I’ve done a “Friday Sandwich” photo blog post but then I’ve been doing a few “Friday Pizza” photos as well as my food review videos. But this one just has to be shared here – this was from a couple of weeks back, I was attending an interview in Palarivattom and in between rounds I went for lunch with a former colleague who was also there to attend the interview for a different post. Since it was a very crowded lunch hour rush I couldn’t take a video but snap up this pic.

This is the grilled chicken sandwich with a generous amount of fries as well from Golden Fork restaurant in Palarivattom near the bypass. The sandwich was delicious and a lot of it – I couldn’t finish mine at the time. Excellent sandwich, gorgeous to look at and I give it a 9.5/10!