Tell us about something you’ve done that you would advise a friend never to do.

I’ve done it and although I have enjoyed some aspects of it I have mostly regrets about it. My advice to most of you living here is to never join start-ups companies. Unless you yourself are at the beginning of your career and are looking for the experience. If you have commitments and need a steady job and a steady income, be careful as to where you join.

There are advantages ofcourse; like a smaller group of people to contend with, less stress (it depends) and no corporate B’S to contend with. Reviews are mostly easier to deal with as the people you report to know exactly what you have to deal with and will be more understanding. Reports will be less and you don’t have to cater to a 100 egos and various formats. The timings are flexible and things tend to be more friendly.

But the bad things outweigh the good. Good talent might be hard to come by, salaries might be lower, perks are less and facilities could be poorer. I’ve had to deal with deferred salaries and little to no benefits and little choices for everything to admin, facilities, material and even water and food. We had situations like no water on certain night shifts, no coffee or tea and getting food was tough. You also have restrictions and limitations and even have problems with getting loans or credit card applications rejected. Can’t blame the banks when even your salaries and benefits are limited or delayed.

Hence it might be better to join established companies. When a startup does work out it can have many rewards and satisfaction. But it is riskier.

Usually I prefer going out for lunch / dinner on Saturdays. And by going out I mean, spending a few hours with a cousin or friends or even by myself. But I was tired on Saturday morning, having slept very little the previous night and so it was on Sunday that I went out with my cousin. 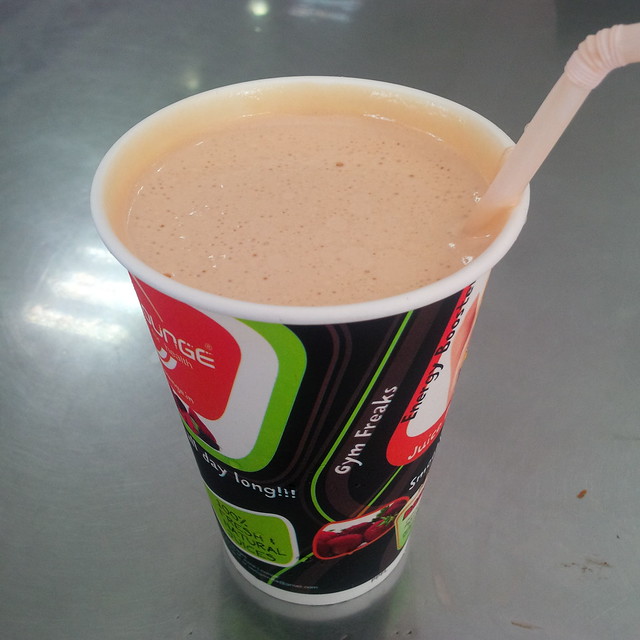 First it was some coffee. Due to a bad cold I hadn’t drunk anything cold or with ice in well over a week. I initially thought that I’d get a cold coffee. I waited for Sujith at the Abad Food Court, as he was running a bit late and so I had a cold coffee by myself. It’s nothing fancy but I seem to enjoy it a lot and have missed it as I hadn’t been there in many weeks. 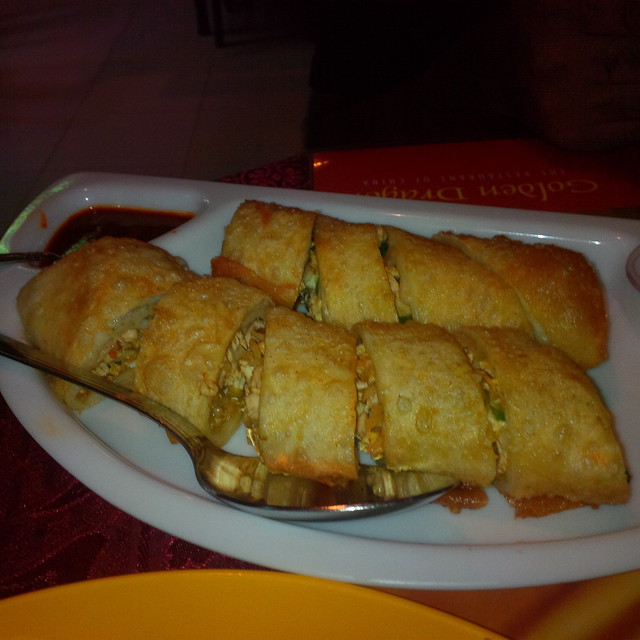 After a while we went to Golden Dragon in Ravipuram for lunch. It was almost 1 am when we got there and found out that they had moved – but just one floor up in the Mercy Estate building. Their old haunts were starting to look like a little like a dump (ok a lot like a dump) and this new diggs was an improvement. But the toilets are still pretty old and dingy. 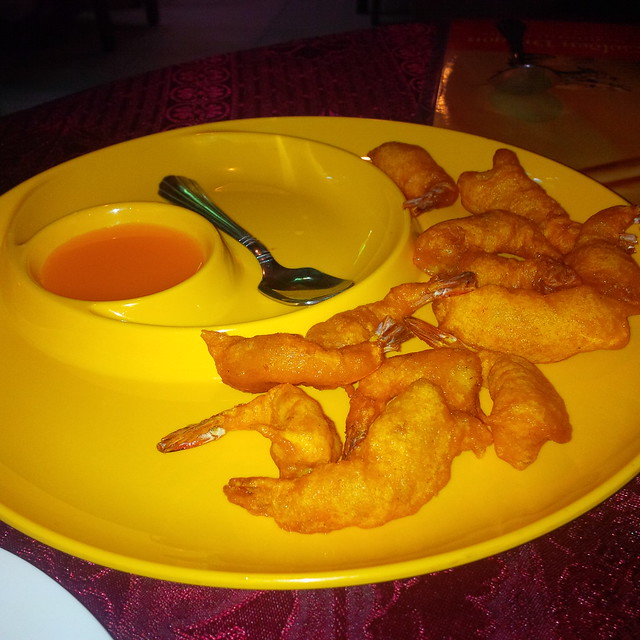 Anyways, we selected out usual starters which were Chicken spring rolls and Golden Fried shrimps. The shrimp was slightly disappointing as they weren’t as large as they usually were. I’m guessing that during the monsoon season it is harder for them to find big fish. Anyway, both dishes were delicious and came with tasty sauces; the sauce for the spring rolls were spicier! 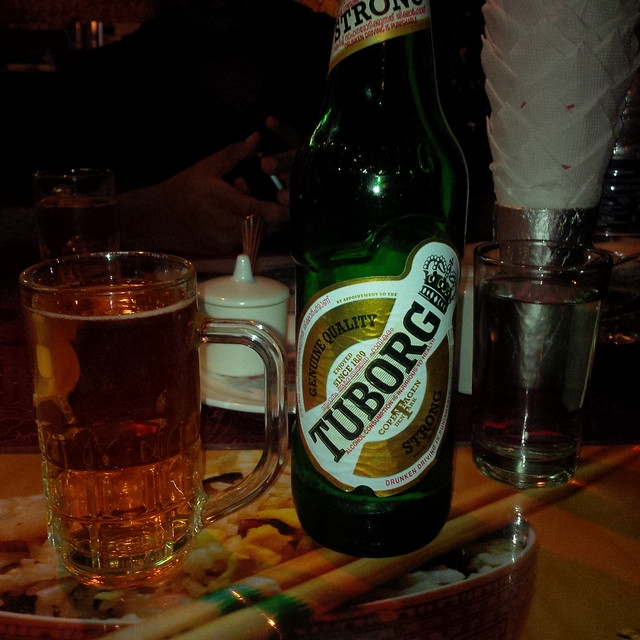 Ofcourse we washed them down with some beer. Both of us ordered the 650 ml Tuborg beers and stuck to just one bottle each. 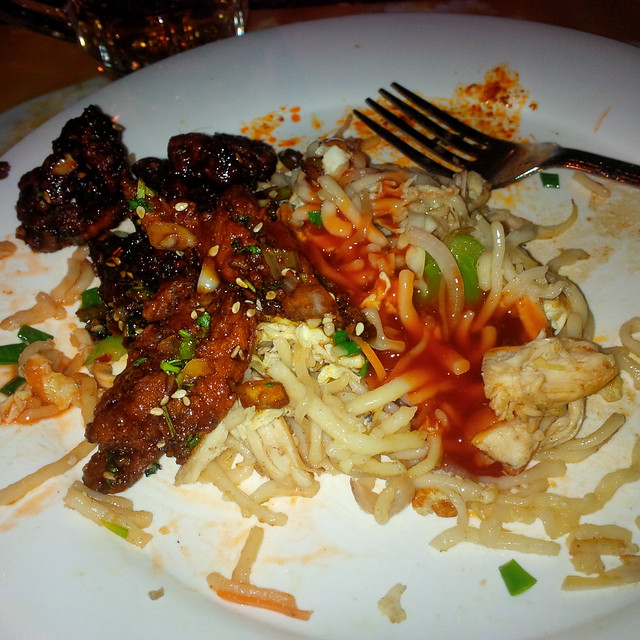 Main course, in between bouts of chatting a lot, was chicken noodles (for me, he opted for chicken fried rice) and we shared a plate of honey roasted pork and honey roasted beef. Everything was delicious as hell, yummy pork was so crispy and delightful. We enjoyed our lunch a lot. There was only one thing that could elevate the meal to another level. 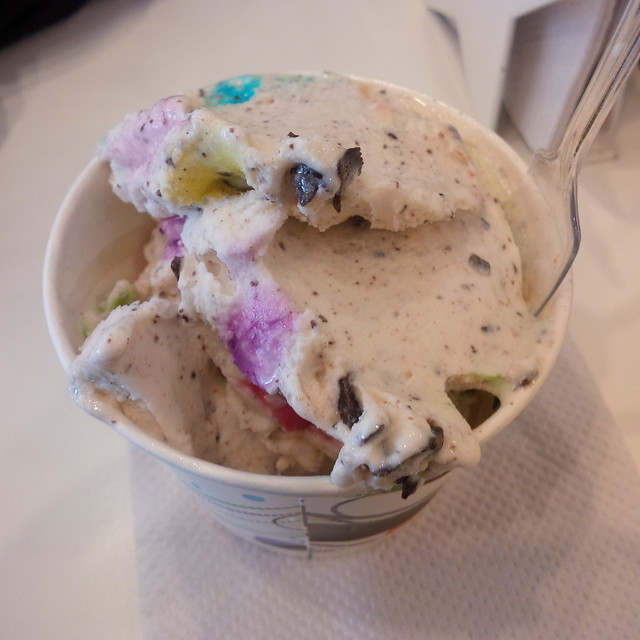 Ice cream. Or gelato to be more accurate! The Italian ice cream place, Milano, was our next destination and a quick walk away. I had the M&Ms & chocolate scoops while he had the hazelnut scoops. Great way to end an awesome aftenoon.