Portugal overcame the early loss of captain Cristiano Ronaldo to beat hosts France in the Euro 2016 final and win their first major tournament thanks to substitute Eder’s superb extra-time strike. Real Madrid forward Ronaldo was carried off in tears in the 25th minute at Paris’ Stade de France, eighteen minutes after injuring his knee in a clash with France’s Dimitri Payet. France, the firm favourites, were unable to capitalise on Ronaldo’s absence, although they almost won it at the end of normal time when substitute Andre-Pierre Gignac turned and hit the inside of the post. Raphael Guerreiro hit the bar with a free-kick for Portugal after 108 minutes, but seconds later they were ahead when Eder fired a low, 25-yard drive past keeper Hugo Lloris.

Ronaldo, who had given his Portugal team-mates animated encouragement in the break before extra time, was offering as much tactical advice as coach Fernando Santos in chaotic closing moments – and he was reduced to tears once more at the final whistle before lifting the trophy that has eluded his country for so long. Ronaldo has claimed the game’s major prizes – such as the Champions League with Manchester United and Real Madrid – but a landmark victory with his country has always eluded him. The greatest disappointment was when, as hosts of Euro 2004, Portugal were beaten 1-0 by rank outsiders Greece in the final at Lisbon’s famous Stadium of Light. Portugal also lost in the World Cup semi-finals in 2006, the quarter-finals at Euro 2008 and the semi-finals at Euro 2012 – and it looked like the curse would strike again when Ronaldo lay on the turf distraught after two attempts to play on through the pain. What a contrasting image it was in the closing seconds of extra time as he virtually took charge of team affairs and light-heartedly bumped into coach Santos, before breaking down in tears when British referee Mark Clattenburg signalled full-time.

Ronaldo, with his knee heavily strapped, then hobbled up the steps to lift the Euro 2016 trophy and fill a gap in his glittering list of honours. He was then centre stage in the subsequent celebrations, lying on the floor in front of his joyous team-mates. The 31-year-old’s night started and ended in tears, but this was a journey from agony to ecstasy – and his status as a Portuguese national hero was cemented even further. Portugal may have been unspectacular winners of an unspectacular Euro 2016 – they won only one game in 90 minutes. But this tough, resilient, organised team under coach Santos were justified in the wild celebrations that took place in front of their fans at Stade de France after the trophy presentation. They finished third in their group, edged out of second place by Iceland’s last-minute winner against Austria, a result that led to England’s downfall in the last 16. 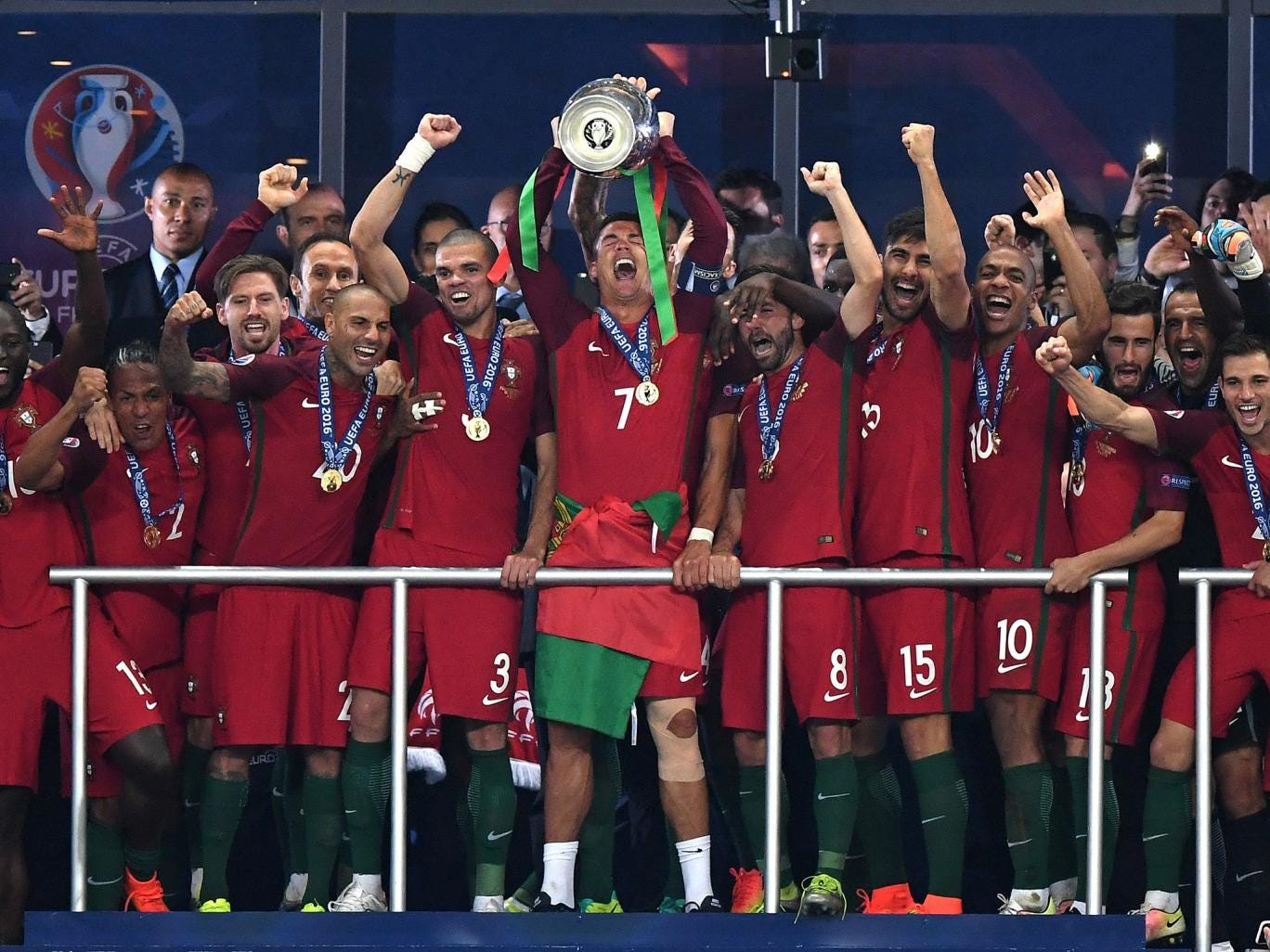