On a weekend road trip, far away from home, you stumble upon a garage sale in a neighborhood you’re passing through. Astonished, you find an object among the belongings for sale that you recognize. Tell us about it.

Hmmm, I am thinking what childhood item I can think of that I could place in here. If I were to be far from home and rummaging through a garage sale idly, not really looking for anything in particular but just browsing without an aim in sight. My teddy bear from when I was 4 years old or so? My Atari? My Knight Rider car model?

I had a musical electronic watch I liked a lot and a Lion head belt that made a lot of sounds as well as some toy guys. I really have no sentimental attachment to them. I had more connections with my cats and my dog. I wish I could have them again. Maybe some music and movies/tv shows but not much for toys or other stuff. Except for my Star Trek models but those I started collecting just last year.

Here is an alien vessel I rarely thought about until I saw that Eaglemoss has released a model of it. At first I was like, it’s not high up on my list of ships to get. Or anywhere near the middle of my wish list either. When I saw pics and review videos of the ship I wanted to get it and also I was able to get it from an eBay seller at a very low price. 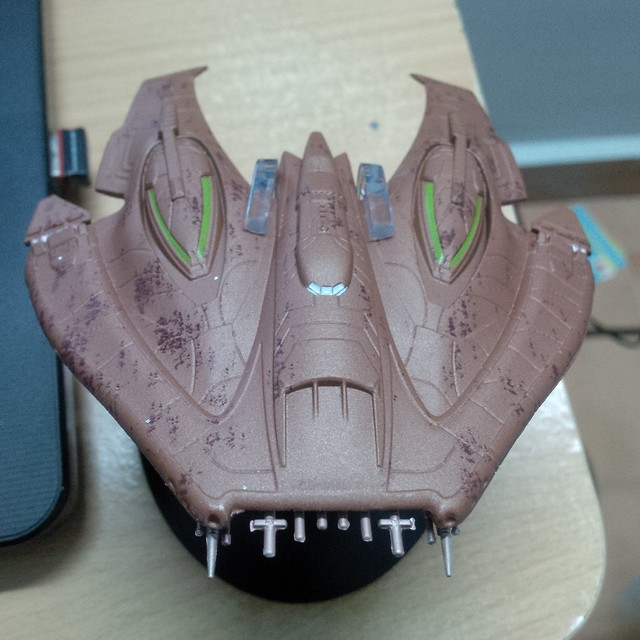 Nausicaan raiders were vessels employed by Nausicaan pirates during the mid-22nd century for raiding freighter routes. These vessels were armed with forward and aft plasma cannons and possessed primitive shields. Although their weapons were considered formidable to a Y class freighter, Nausicaan raiders were outmatched by NX-class starships, whose spatial torpedoes were capable of piercing Nausicaan shields. This type of vessel was described as “small” and “fast.” The bridge of a Nausicaan raider was scripted to be “dark,” although the final version of the room clearly features large, colorful wall panels. Also, the offensive and defensive specifications of a Nausicaan raider were scripted thus; “Medium yield plasma cannons. Simple (TECH) shielding,” where the word “tech” was later to be replaced by a more technical term. In the episode’s final version, this became, “Fore and aft plasma cannons,” and a less direct reference, immediately thereafter, to the craft having shields. 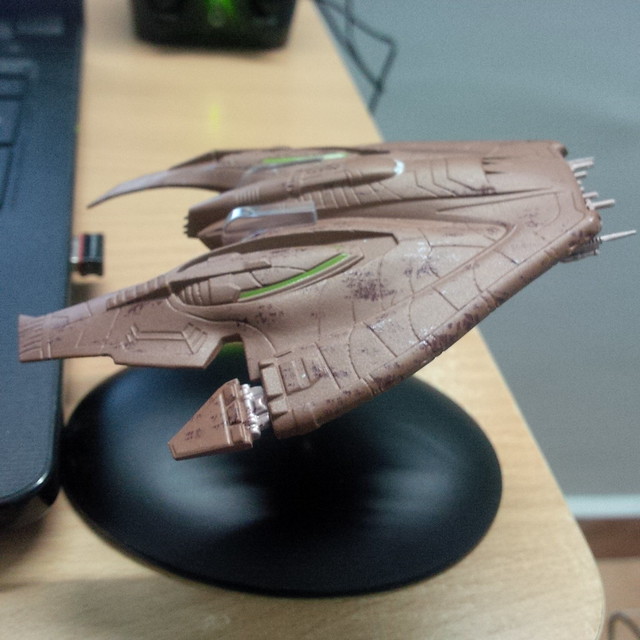 Even though Nausicaan starships had never before been portrayed, inspiration for the forthcoming design was taken from how Nausicaans themselves had been established as typically behaving; due to their thuggish nature as belligerent troublemakers, their vessels had to have a fittingly threatening and aggressive appearance. 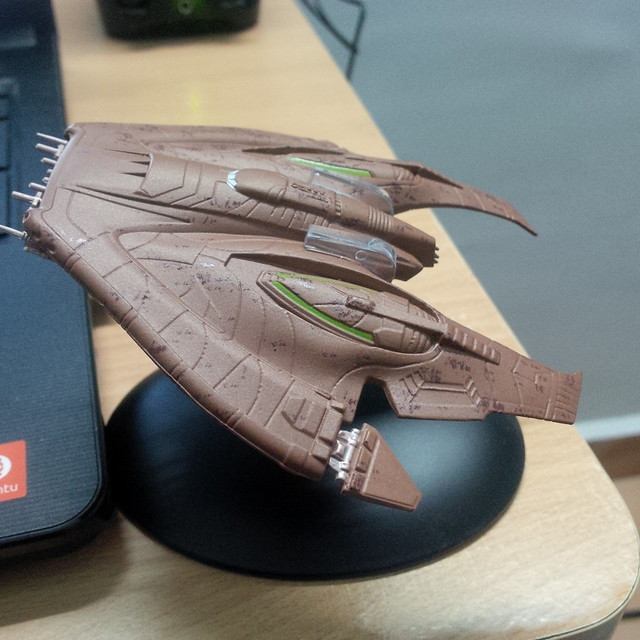 Illustrator John Eaves began designing the Nausicaan vessel by sketching out a variety of basic shapes. “I just threw a whole bunch of stuff together,” he stated. These initial sketches included a design concept for a Vulcan ship, which Eaves had drawn earlier. The same ship layout, with blade-like curves, gave Eaves a design direction, which he expanded upon in the other sketches. As he became increasingly more inspired, Eaves felt the look he was aiming for was somewhere “between the bottom of a shovel and a manta ray.” The producers approved one of the initial illustrations as the final version, a configuration Eaves likened to a manta ray. “On this one, they chose a ship right off the first pass [….] It was a busy show, so I didn’t get to flesh it out a little bit more, but I didn’t need to.” 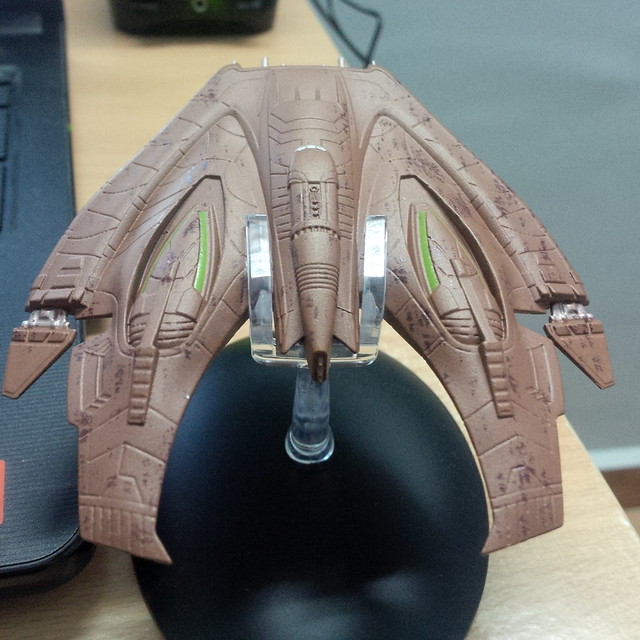 Lead CG Artist Pierre Drolet took Eaves’ illustration and digitally turned it into a three-dimensional model. Drolet incorporated some of his own ideas into the design, shading the Nausicaan ship with an earthy color scheme, and added detailing such as the forward plasma cannons. All these finishing touches helped give the ship its highly sought-after aggressive look. These vessels could presumably travel faster than warp 1.8, the maximum speed of the Fortunate, for them to be able to constantly locate, track, attack, and raid said vessel over an extended period of time. Issue 30 of Star Trek: The Official Starships Collection lists the Nausicaan fighters as having a maximum speed of warp 2 and a length of 90 meters. 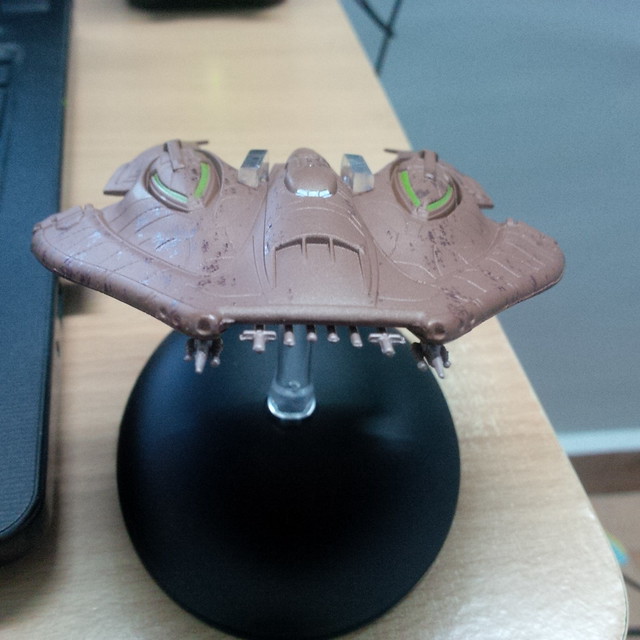 So that’s the little information we have on the Raiders. I think it’s a neat design and manta ray look is just awesome. Hope you like the photos and now enjoy the unboxing video.