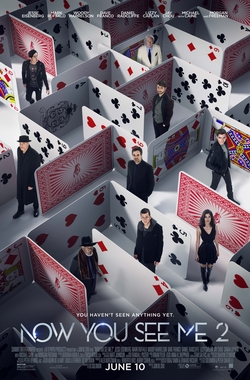 Ok, I did like the first one a lot more because it was fun and entertaining for the most part. This sequel tries to do the same things but adding a more dangerous element with revenge being at the forefront of things but in the end they did the twist thing once too many times. In the end of the last film we find out that the guy who was chasing the four horsemen, FBI agent Rhodes is also the guy who recruited them and brought them together to get them to join The Eye society. One year later the horsemen, who have been told to lay low by Rhodes are getting restless, especially Atlas who goes on his own, having grown tired of waiting for a mission, and seeks out The Eye himself. His search leads him to an underground tunnel in which he hears a voice that tells him that his wait may be coming to an end.

At his apartment he finds another magician, illusionist Lula May in his apartment. Thwarting his attempts to bind her, she escapes after saying that she is fascinated with the horsemen. Later when Atlas, McKinney & Wilder meet up with Rhodes, he finds Lula there and Rhodes introduces her at the replacement for former member Henley Reeves. He gives them a new mission to exposing corrupt businessman Owen Case (Ben Lamb), whose new software secretly steals data on its users for Case’s benefit. However things go wrong at the hijack the launch party for the new software, leading the FBI to their location. The show is unexpectedly interrupted by a mysterious individual who reveals to the world that Wilder, believed to be dead, is actually alive, and that Rhodes is their mole, forcing Dylan to evade his new boss Natalie Austin. While escaping, the Horsemen enter their escape tube on a roof, but instead of taking them to their truck, they emerge in Macau, where they are captured by mercenaries led by Merritt’s vain twin brother, Chase McKinney and brought before Chase’s employer, technology prodigy Walter Mabry, Case’s former business partner who faked his death after Case stole Walter’s company.

Mabry conscripts the Horsemen into stealing the data-mining device developed by Case from a secure facility, to prevent Case from using it. The chip allows the user to decrypt and access any electronic device around the world. Atlas agrees to steal the device, despite the others’ expressing loyalty to Rhodes, and leads them to a renowned Macau magic shop run by Li and his grandmother Bu Bu, who makes them the equipment needed to pull off the heist. Atlas contacts The Eye to arrange the device handover once stolen. Rhodes, now a fugitive from the law, forced to spring his rival Thaddeus Bradley whom Rhodes blames for the death of his father, out of jail to help him expose the mastermind behind the conspiracy. Arriving in Macau, they seek Li for information where it is revealed that Rhodes’s father was a customer who had commissioned a watch along with the safe used in the stunt that had killed him. As Rhodes thanks Li for the watch, Bradley steps into a trick sarcophagus and escapes Rhodes’ custody, revealing that he anticipated Rhodes would free him if exposed.

In an amazing sequence the Horsmen steal the chip Atlas waits in a marketplace in order to give the chip to the Eye. He is then confronted by Mabry and his men, Mabry revealing that Atlas had been fooled into thinking that Mabry was The Eye. Mabry had cloned his cellphone in the tunnel providing all the information needed to plot their capture. Rhodes intervenes and pretends to retrieve the device, slipping the device back into Atlas’ jacket and fights off Mabry’s men, but gets distracted by Chase and is captured by Mabry’s forces. He is taken to a nearby yacht where he learns Mabry is acting on behalf of his father, Arthur Tressler, the businessman whom Rhodes employed the Horsemen to expose in revenge for Tressler’s company denying his mother’s insurance claims after Shrike died in a stunt gone wrong. Having secured the device, Tressler reveals Bradley as his associate and places Rhodes in a replica of the same safe that his father died in and leaves him to drown, but Rhodes now understands how his father had planned to escape and manages to open the safe door. He’s helped to the surface by Atlas as the Horsemen had traced him after Tressler and Mabry had left. After the rescue they find that the chip they had stolen appears to be a fake.

Rhodes and the Horsemen reunite with Bu Bu and Li, who are revealed to be true representatives of The Eye society and determine that Mabry’s and Tressler’s principal fears are exposure which they should exploit. They announce their performances in London  performing a series of tricks live on the streets. Mabry, Tressler and Chase notice a pattern in their appearances, discover that Rhodes is still alive, and locate the location of their finale, capturing the five and bringing them aboard their private plane. Mabry takes the chip card from them and Rhodes along with the other Horsemen are thrown out of the plane in flight. However, Tressler finds that the plane has never taken off, and instead they were tricked into boarding a plane on a barge in the middle of the River Thames, their criminal activities being broadcast live to the world by the Horsemen in the process. Mabry, Tressler and Chase are arrested by the FBI, and Rhodes entrusts the information they’ve gathered on the real criminals’ activities to Austin, who allows him a head start to escape.

Rhodes and the Horsemen are then taken by Li to a secret library in Greenwich observatory where they are reunited with Bradley, who reveals himself to be senior in the Eye’s leadership and Lionel Shrike’s partner, having masqueraded as his rival as part of their mutual act. Bradley compliments Rhodes on the magician he’s become and explains that the Horsemen have completed their training. Before Bradley leaves he asks Rhodes to be his successor in the Eye. He points out a curtain and tells them to ignore whatever is behind it. Rhodes and the Horsemen find a door behind the curtain and enter a spiral staircase. As the movie ends, the camera pans out and the staircase is revealed to form the shape of the Society’s eye symbol.

That last twist of Bradley being the leader in The Eye and actually Shrike’s partner was one twist too many. I found it boring to say the least. The movie failed to ignite the same sense of awe and mystique if you ask me. It’s not a bad film but it was like seeing a rehash to be honest. There are some cool scenes but Woody Harrelson as the twin was terrible. 7 outta 10!