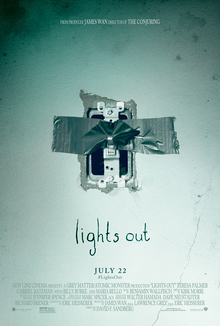 I haven’t watched that many horror films this year I guess. Last year too. Lights Out is a 2016 American supernatural horror film directed by David F. Sandberg in his major directorial debut, produced by Lawrence Grey, James Wan and Eric Heisserer and written by Heisserer. It stars Teresa Palmer, Gabriel Bateman, Alexander DiPersia, Billy Burke and Maria Bello.

Here is the story, Sophie the mom in the film, was in an institution when she was a child and met and befriend another girl named Diana who had an unusual condition that made her skin photosensitive. The doctors there did some odd experimental treatment with lights that seemingly killed her (burned her out or something) when she was exposed to a bright light. However Diana still lives on and is in the shadows and is only seen as a silhouette in the dark. Her friendship with Sophie is what is keeping her here in this world and she latches onto her and controls certain aspects of her life. She causes Sophie’s first husband to leave and scares the older daughter Rebecca so much that it brought about a rift between mother and daughter.

Sophie remarries and has a son named Martin but Rebecca leaves once she is old enough. Martin comes to Rebecca saying that he is scared. His dad was killed by Diana while he was at work and Rebecca takes him in so he can sleep without being in fear of Diana, which Rebecca thinks is just in their mother’s mind. But soon she changes her position when she is attacked by Diana first at her apartment and then in their house. Rebecca confronts Sophie about Diana but she denies the accusations. Rebecca, her boyfriend Bret and Martin decide to stay overnight to protect her. Rebecca goes to her bedroom to reconcile; however, Sophie secretly passes her a note saying “I need help” before Diana tugs her back in. Rebecca realizes that she is being controlled and turns on all the lights in the house to keep her away.

Diana traps Martin & Rebecca and Bret runs out to get the cops who last a few minutes before they too are killed. Rebecca realizes that using blacklight can allow them to see Diana and discovers scrawled writings along the wall, explaining how Diana won’t let anyone “take” Sophie and that she killed Rebecca’s father. Rebecca sends Martin to Bret and goes back to rescue Sophie. Diana then attacks Rebecca violently, but Sophie confronts her with a gun, realizing she’s Diana’s tether to the world. She then commits suicide by shooting herself which makes Diana disappear. Distraught, Rebecca, Martin and Bret reconcile and vow to stay together as the cops and ambulance are at the scene.

Boring and not scary at all. It’s just about average with an unexciting premise and boring storyline. Only thing I liked about the movie is Teresa Palmer who I think is a doll. 6 outta 10!