What a day! Today has been hot, though not too sunny, and humid as we had clouds hovering over and it looked like it might rain a bit. Well only drizzling is what we got later on in the evening.

Anyways, I got showered and shaved in time to leave home at 12 but there was a huge protest going on the main road. Political party workers and hired goons were blocking the main road and making it difficult for people to pass by in their cars, bikes and buses. The cops came in droves and chased away the protestors from this area. Hold your protest in front of the High Court, the government buildings or the collectorate office or wherever the fuck but not on the road. 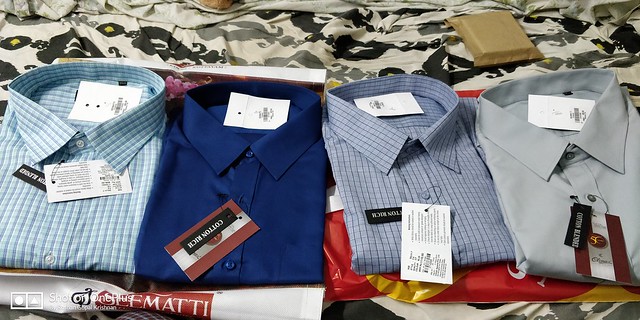 They used water hoses and threatened to douse the protestors who then slinked away to lick their “wounds” but there still were bog buses of cops around. I went to have some lasagna and cold coffee in Kawaha and then went to shop for shirts (look at the pic above) at Men’s Studio. By then I was tired and then went to my bank in Ravipuram. After that it was almost 4 pm and I went to Center Mall to buy some groceries and toiletries and when that was done it was 4:45 pm and I was hungry again.

So I had a burger at Burger King and then came on home. At 7 pm I had a coffee and I will have a light dinner after 9pm. So tired.

Dominos Regular Pan Chicken Sausage Pizza – it’s chicken and not pork sausage. What can you do – national level Indian francheese’s! I prefer pork sausage but this was good.