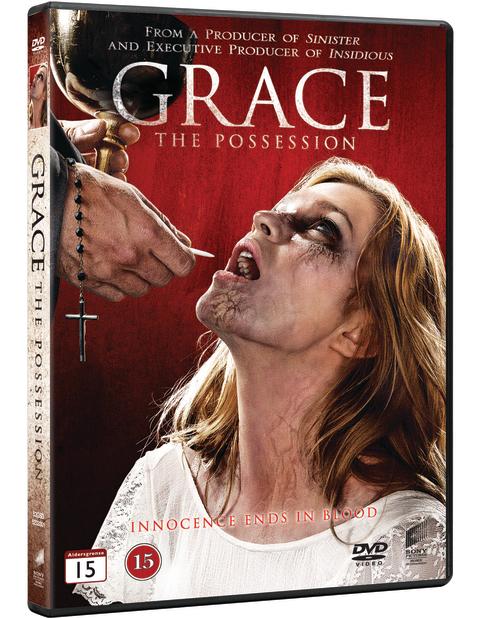 Starring Alexia Fast, Alexis Knapp, Joel David Moore & Lin Shaye, Grace The Possession is a 2014 horror film from the first person’s point of view. Directed by Jeff Chan & distributed by Sony Pictures the film is kinda unique in that way as we see things the way the possessed character Grace, played by Canadian actress Alexia Fast, sees with the use of a head worn camera. We only see the actress when she looks into a mirror and we see her reflection or when she looks down on her hands and the rest of her body.

As the movie starts we see the her birth and the perspective the camera takes is of a floating entity, which becomes obvious when the mother looks straight into the camera and declares, “There is no God!”. Years later the 18 year old Grace is off to colleague much to the chagrin of her grandmother who does not want her to fall into sin. The demon enters Grace around this time I guess and Grace is trying to enjoy college life along with the drinking and partying that comes with it. She also has sexual interest for the first time in her life in the form of a boy she meets at the campus. Drinking makes her feel even sicker and she hallucinates that she kills her roommate by pushing her off the balcony and other scary visions.

Her grandmother brings her out of college and makes her go to see their priest, father John, and tries to control Grace’s life. Then there’s movement in Grace’s mother’s room, which her grandmother keeps her away from. Later Grace discovers, through a vision, that her mother was raped by the priest and she herself is the child born outta that. Towards the end the demon takes over and kills the grandmother and then goes to the church. The priest and a younger priest Luke, who Grace has had visions of sex before, invite an older priest & exorcist but the demon evades their attempts and kills the two older priests. Luke approaches the demon and fights it but in the end he asks the demon to possess him instead and let Grace go.

The demon agrees and possess Luke – and now we see things from his POV – and he asks Grace to leave. As the movie ends, we see Luke, now a full priest, presiding over mass in front of a full church. I dunno what that is supposed to mean and wish we had more. It’s a good enough approach to a movie and even though I liked the concept, the movie pales in comparison to many I have seen before. A lesser budget and a new director might be the reason but I do appreciate the effort. Still, 5.5 outta 10!

It’s finally here! Well not that I or anyone I know was waiting eagerly for it but Taco Bell is finally coming to Kochi. It’s the inauguration of the first Taco Bell outlet in Kerala and it’s in Lulu Mall, Edapally – which is a suburb of Kochi. Lulu Mall is largest mall in India (for now anyways as that title will soon be gone) and has KFC, Dominos, Pizza Hut, Burger King & McDonald’s.

Now they have a Taco Bell too. I have never been to a Taco Bell and never had anything from them. They have outlets in Mumbai, Delhi, Hyderabad & Chandigarh – 11 in all and I guess Kochi makes 11. If it’s a success I guess they will have one each in the two Lulu Mall outlets that are being setup in Calicut & Thiruvananthapuram. But since India does not allow national/international food chains to have beef products (local joints in Kerala can have beef but not in most of India) what will they serve? Chicken ofcourse. Let’s look at the menu!

Mexican Paneer? What the fuck??? Tikka Masala Nachos Veg/Chicken? LOL, to be honest the rest of the menu looks interesting and I want to try a bunch of them. No beef ofcourse but lots of chicken option. I hope it’s good.