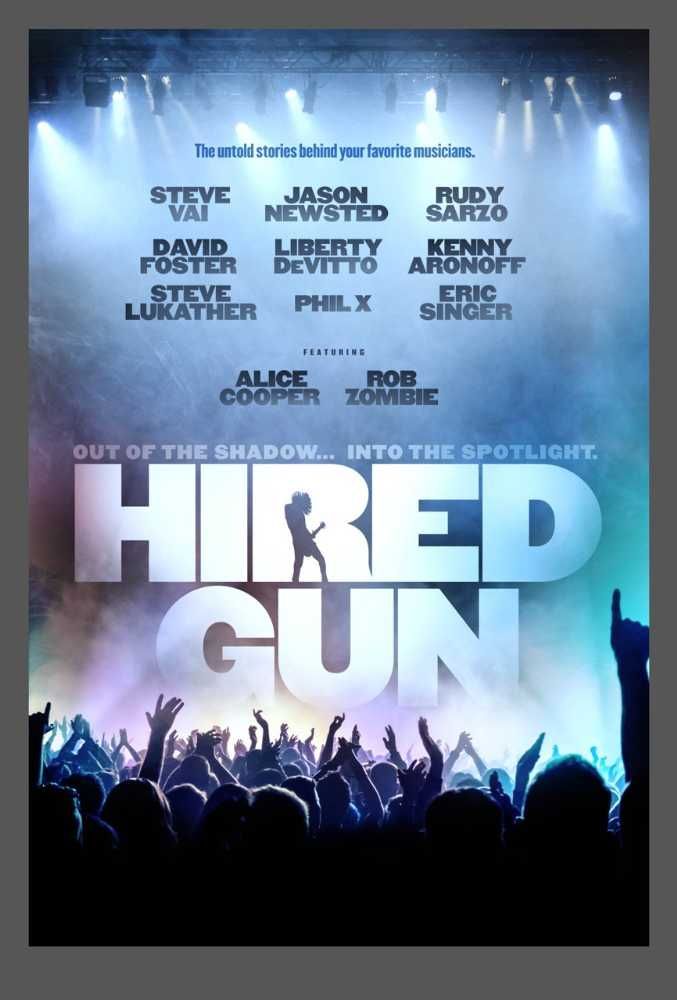 Hired Gun is a documentary film about the hired guns in the music industry; sidemen musicians who play on records and live concerts for bigger name artists and singers. Directed by Fran Strine’s Hired Gun, introduces the instrumentalists who’ve played everything from heavy metal to Disney kid-pop, and rarely doing much to capture its subjects’ individual quirks.

Interviews with ex-Metallica bassist Jason Newsted, former Billy Joel drummer Liberty DeVitto, Rudy Sarzo (Ozzy, Dio, Quiet Riot) and Five Finger Death Punch guitarist Jason Hook, who was not only a sideman for Alice Cooper and Hillary Duff but is also an investor in the film as well. The movie’s interviewees played with acts like Ozzy Osbourne, Metallica and Alice Cooper and Billy Joel. Some went from nobodies to headliners abruptly: When Metallica’s bassist Cliff Burton died in 1986, Jason Newsted scraped money together from friends to fly out to audition, was hired for $500 per week and eventually got to join the band. Ted Nugent’s old sideman and vocalist Derek St. Holmes recalls how fans wrongly assumed the star sang lead on hits like “Stranglehold”; others were never even credited on records, trading glory for a paycheck.

The sidemen were usually among the best musicians, masters of their instruments of choice. Of studio perfectionists Steely Dan, one interviewee says, “whether you like that band or not, you know that if [a session musician was] ever on a Steely Dan record, they’re one of the baddest motherf—ers walkin’.” Drummers Kenny Aronoff, Glen Sobel and long time Billy Joel’s band member Liberty Devitto are also part of the documentary. What really got me was the story of Billy Joel’s band members, who were once a very tight family unit and post a major problem when Joel’s manager was discovered to have swindled millions from the singer, he changed and stopped trusting anyone. He would eventually fire most of his band, which led to the guitarist committing suicide.

The documentary features over two dozen musicians, who have worked with some of the biggest artists and bands to have graced the international music scene.

Artists Alice Cooper, Rob Zombie and P!NK are also among the interviewees, providing the perspective of the superstars who use the services of Hired Guns, as well as Bob Ezrin (Record Producer for Cooper, Pink Floyd, and KISS), also giving his take.