The Beef Steak Sandwich @ Cocoa Tree – grilled or sauteed beef, onions, Gruyere cheese with lettuce. French fries and a shake on the side. Pretty good for an 8.5 outta 10! 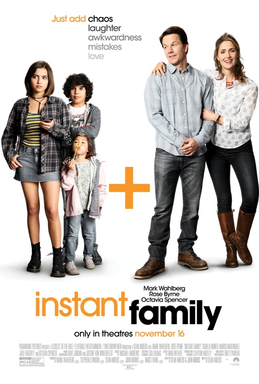 Married couple Pete and Ellie Wagner hadn’t planned on becoming parents but are taunted by family members who say that they will never have any. After a discussion they decided to try the adoption route and enroll in a foster parents course. Along with other couples and a forceful single parent hopeful, they are given the ropes by counselors Karen & Sharon. After some days pass there is a fair where the couples get to meet the kids who are up for adoption. Pete and Ellie walk by the teenagers, although Ellie shows hesitance over raising a teen, but one of the teens, Lizzy, informs Ellie that they all know no one wants to adopt the teens.

Lizzy has an impression on the couple and they go to meet Lizzy and her younger siblings, Juan and Lita. The counselors inform the Wagner’s that the kids’ mother is a drug addict who is currently in jail, and she set their home on fire because she left the crack pipe lit. Ellie & Pete decide to back out from adopting but at a Thanksgiving dinner the rest of their family show relief and make it clear that they never though that the two would actually adopt, it makes Ellie & Pete even more adamant to do so. The three kids come to stay with them and initially it goes well but then things become a mess. Lita refuses to eat anything but potato chips, and Juan reacts sensitively to every instance of trouble. Lizzy is also frequently bratty toward the Wagners, but especially Ellie. Pete’s mother Sandy comes to visit to meet the kids, and instantly wins them over by treating the whole family to Six Flags. While there, Lizzy runs off with two friends from school. She doesn’t reappear until later, and Pete grounds her for not informing him or Ellie as to her whereabouts.

As some time pass by Lita calls Pete “daddy” when he fixes her doll and Ellie gets a “Good night, mommy” from Juan after she comforts him from a nightmare. Soon, Lizzy starts to go along with the others as they partake in family activities. Pete even invites her to a fixer-upper he is working on so they can wreck things for her to take out her frustrations. However Carla, the kids’ mother is now out of prison and wants to see them, with a social worker present. The children become more and more unruly and Pete and Ellie feel profoundly demotivated and frustrated. Pete and Ellie seek out the Fernandez family, who had spoken with their adoptive daughter Brenda at the training, for help with Lizzy. They inform the Wagners that Brenda is back in rehab, but Mrs. Fernandez tells them what a process it is to really form a bond and trust with the kids. And then….they catch Lizzy trying to send naked selfies to a “Jacob”.

The Wagners freak out but drop Lizzy at school. Ellie think she knows who Jacob is but it turns out that the kid is innocent and Jacob is actually the 22 year old janitor. Jacob is arrested, but so are Pete and Ellie, leaving Juan and Lita alone in the car, while Lizzy is humiliated. When Pete and Ellie return home, they are told by Sandy that they need to reassure Lizzy that they love her, because she doesn’t feel that she is loved. At a hearing the judge reads out a statement about what the Wagners did and refuses to let Ellie read a new statement she prepared the last night. Carla is given rights to the kids. The 5 go to the Wagner’s home for the night and are to go to Carla’s in the morning. Pete and Ellie sadly start to pack things up for the kids. Juan and Lita do not want to go, but Lizzy is ready.

However, Karen and Sharon arrive at the house to inform Lizzy that Carla is not coming to get them, as she failed to show up that morning and appears to have started using drugs again. Heartbroken, Lizzy runs away while Pete and Ellie chase her. They catch up and tell her they love her, and eventually the trio reconcile. 4 months later the same judge presides over the hearing for the Wagners to adopt the kids as their own and congratulates the new family.

The movie is heartfelt and though it has some flaws, it’s a feel good film. It’s funny in places and endearing in some scenes. Good performances for the most part and good casting for the kids. I give it an 8 outta 10!