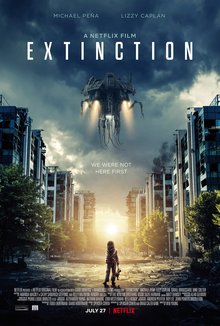 Extinction is a 2018 American science fiction thriller film directed by Ben Young and written by Spenser Cohen and Brad Kane. The film is about a father who has a recurring dream/vision about the loss of his family while witnessing a force bent on destruction. The film stars Lizzy Caplan, Michael Peña, Mike Colter, Lilly Aspell, Emma Booth, Israel Broussard, and Lex Shrapnel. It was released on Netflix on July 27, 2018.

Peter, an engineer working in a large factory, is suffering from nightmares and visions of an alien invasion in which he sees a lot of people being gunned down on the streets as several small spaceships descend upon the city. His work life and family life is being affected so on the suggestion of his wife, Alice, he visits a hospital for psychiatric help. However while waiting a fellow visitor tells him of very similar visions, which makes Peter leave before he can see a doctor. Later after a dinner party at their swanky apartment, Peter sees the same ships descending and then the attack begins.

Alien soldiers, from the ships, in black rubber suits with green glowing patches and blackened out full face helmets start attacking the people on the street killing several. The soldiers start storming the buildings in search of people. Peter & Alice  manage to barricade their apartment after telling their two young daughters to stay in the room. A soldier barges in and is about to shoot Peter when their youngest daughter distracts the soldier enough for Peter & Alice to get the upper hand. The family of four escape down the stairs and head to the underground tunnel and decide to go to Peter’s factory which is where he seems himself in the dreams. Alice though is injured by a blast and the solder catches up to them. Peter fights him off but to his shock, the soldier removes his helmet and appears human. Peter forces the soldier to carry Alice to the factory. There, his boss, David, explains that the invasion has been expected for many years.

A medic examines Alice but informs Peter that he cannot save her. As David’s men drag the invading soldier off to execute him, he yells to Peter that he can save Alice. Peter agrees to stay with the soldier to save Alice; David will evacuate their children to a subway station where a transport train awaits to take them all to an offsite base. The soldier surprises Peter by revealing that Alice is a synthetic (AI). To save Alice, she needs an alternate source of power: Peter himself. At the soldier’s guidance, Peter cuts open his own chest with a pocket knife, confirming that he is also a synthetic. The soldier connects a cable between the two androids and Peter passes out, experiencing in detail what he had thought were visions of the future but are actually memories of a past war. Fearing that android workers (synthetics) might rise up against humans, the military attack unarmed synthetics. The synthetics fight back and eventually drive all humans off the planet.

To deal with the guilt of what they have done and prevent themselves from living in fear of a reprisal from humans, the synthetics have wiped their memories and lived as humans, unaware of their nature or history. Peter wakes up and the soldier, Miles, explains that humans have been living on Mars for 50 years. He had expected the synths to be monsters, not families with children. Peter and Alice part amicably with Miles to find their daughters as humans breach the roof of the factory. As they all depart on the train, David explains that he and a handful of other synthetics kept their memories to stay prepared for the inevitable return of the humans. Peter suggests that some day there could be peace between humans and synthetics.

The storyline reminded me a lot of Skyline and the reboot tv series Battlestar Galactica. It is at best a B movie and not that entertaining or memorable. At best it can rival the best of SyFy films and it has similar production values. A 6.5 outta 10!

One of my favourite scifi franchies is Alien. Though I was never a fan for the longest time, sometime in the mid 2000s a friend convinced me to watch the first 4 and give them another chance. Now I am a big fan of this franchise.