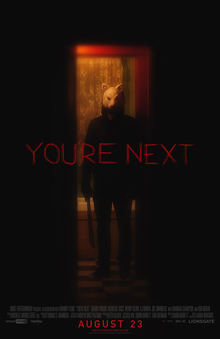 You’re Next is a 2011 American black comedy slasher film directed by Adam Wingard, written by Simon Barrett and starring Sharni Vinson, Nicholas Tucci, Wendy Glenn, A. J. Bowen and Joe Swanberg. The plot concerns a family under attack by a group of masked assailants during their wedding anniversary getaway.

The movie starts with a man and a younger woman, who after having sex, are killed in the house by a man in a Lamb Mask and who has the words “You’re Next” written in blood on the window. The next day, Aubrey and Paul Davidson, a middle-aged couple reach their vacation house in rural Missouri in order to get things ready for their wedding anniversary dinner. Their son Crispian brings his Australian girlfriend Erin to meet them for the first time and are joined by Crispian’s older brother Drake and his wife Kelly, Crispian’s younger siblings Felix and Aimee, and their partners, Zee and Tariq, respectively.

As an argument breaks out between Crispian and Drake, someone shoots crossbow bolts through the window, killing Tariq and wounding Drake. The survivors discover that cell phone reception in the area has been jammed. Aimee runs outside for help, but runs into a garrote wire which slices her throat, killing her. Crispian leaves the house to find help. One by one the people in masks start killing the others. Erin who grew up in a survivalist compound where she learned combat and survival skills. fights back and kills a man in Tiger Mask. t is revealed that Felix and Zee hired the assassins Tom (Fox Mask), Craig (Lamb Mask), and Dave (Tiger Mask) to murder the family so they could collect their inheritance. While Zee is helping Erin, Felix lures Drake to the basement and kills him.

Later Erin jumps out of the window to escape Fox Mask, injuring her leg and eventually doubling back to the house. While hiding, Erin overhears an argument between Felix, Zee, Fox Mask and Lamb Mask. Her cell phone beeps to indicate that her text to 911 has gone through, alerting the killers. She goes out of the window and kills Lamb Mask and sets up a trap at the front door but Fox Mask comes into the house through a window and Erin kills him after a fight.  Zee and Felix attempt to kill Erin themselves. Felix stabs Erin, but she kills him, then uses his knife to kill Zee. Felix’s cell phone rings and Erin answers without speaking. Believing he is speaking to Felix, Crispian apologizes for fleeing instead of not helping, revealing he was in on the murders. He returns to the home and finds Erin. After he attempts to bribe her into staying quiet, she kills him in disgust. A policeman arrives and shoots Erin in the shoulder, having seen her kill Crispian. After calling for backup, he attempts to enter the house despite Erin’s pleas, and is accidentally struck and killed by Erin’s front door trap that was intended for Fox Mask.

It becomes entertaining once the killing starts and the twists is really good. Made on a budget of $1 million, the movie made almost $27 million at the box office and became a cult favourite. 7 outta 10!