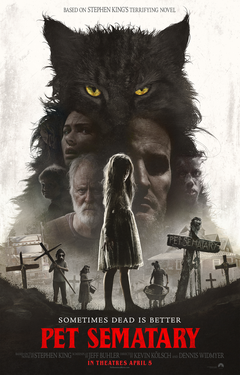 Pet Sematary is a 2019 American supernatural horror film directed by Kevin Kölsch and Dennis Widmyer and written by Jeff Buhler, from a screen story by Matt Greenberg. It is the second adaptation of the 1983 novel of the same name by Stephen King, after the 1989 film. The film stars Jason Clarke, Amy Seimetz, and John Lithgow, and follows a family that discovers a mysterious graveyard in the woods behind their new home.

The story is pretty much followed from the original with some changes mainly towards the end. Dr. Louis Creed moves his family – wife Rachel, daughter Ellie, toddler Gage and their pet cat Church – from Boston to the small town of Ludlow, Maine. The same day they see a procession of children in animal masks headed towards the woods to bury a deceased pet dog. There is a sign that reads Pet Sematary deeper in the woods and their aged neighbour Jud warms the, not to venture to far out.

At the university hospital, Louis is left shaken after failing to save the life of Victor Pascow, a student who has been fatally injured after being struck by a vehicle. On the night following Pascow’s death, Louis experiences a vivid dream in which he meets Pascow, who leads him to the back of the cemetery and warns Louis not to “venture beyond” and that “the ground is sour”. A disturbed Louis awakens to find his feet and bed sheets caked in mud, suggesting that the evening’s previous events were more than just a nightmare. Later on Halloween, Church is killed when he is hit by a truck. Jud takes Louis to the Pet Sematary, supposedly to bury Church, however he leads Louis farther to an ancient burial ground. The next day Louis is stunned to see a dirty and smelly Church has come back. The cat is more aggressive and scratches Ellie and violently mangles a bird.

Louis confronts Jud who tells him that the burial ground behind the Pet Sematary is able to bring things back from the dead and is believed to be inhabited by a spirit known as the Wendigo. After Church attacks Gage, Louis attempts to euthanize him, however he decides against killing the cat and instead releases him at the gate of an area with restricted access, before telling Ellie that he ran away. The Creeds throw an outdoor party for Ellisees Church returning and runs out to the highway to greet him, followed by Gage. Louis rushes to save Gage and the truck driver wrecks the truck in order not to hit Ellie but the trailer separates and hits the girl, instantly killing her. The family is devastated, and Rachel and Gage leave to spend a few days with Rachel’s parents. Jud, sensing that Louis is planning on resurrecting Ellie, warns the grieving father that “sometimes dead is better”. However, despite the warnings from Jud and Pascow’s spirit, and his own reservations about the idea, Louis’s grief and guilt spur him to carry out his plan.

After drugging Jud, Louis exhumes Ellie’s body from her grave and inters her in the burial ground watched by the Wendigo who lets him bury Ellie. Ellie returns from the dead, however she immediately manifests a disturbing and ornery demeanor. At her parents’ house, Rachel is frightened by visions of her dead sister Zelda, who suffered from spinal meningitis and died after falling down a dumbwaiter shaft, leaving Rachel traumatized since she was young. Gage also sees the ghost of Pascow; meanwhile, Jud wakes up and confronts Louis. Insisting everything is fine, Louis sends Jud away; however, Jud spots Ellie watching him from her bedroom window. He is distracted by a snarling Church and Ellie slashes his ankle and after he falls she stabs him to death. Rachel returns home with Gage and cannot believe that she is seeing her daughter alive. She manages to get Gage to Louis but she is stabbed by Ellie. Louis locks Gage in the car and returns upstairs to find a dying Rachel who begs Louis not to resurrect her before succumbing to her injuries.

Ellie knocks Louis unconscious and drags Rachel’s body into the woods where she buries her beyond the Pet Sematary. As Louis prepares to kill Ellie in the forest, he is impaled through the chest with a weather vane by a resurrected Rachel, and he too is buried. Along with Church, the trio set fire to Jud’s house before approaching the car where Gage still sits inside. The resurrected Louis gestures to Gage to unlock the door.

This one is darker and ends differently from the original but it doesn’t better the original and I feel that horror film makers seem to be running out of ideas and reboots and remakes seem to be popping up a lot. I still liked it even though the lead actor’s mumbling and acting style put me off. I give it a 7 outta 10!