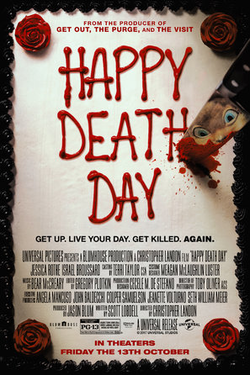 Happy Death Day is a 2017 American black comedy slasher film directed by Christopher Landon, and written by Scott Lobdell. It stars Jessica Rothe, Israel Broussard, Ruby Modine, Rachel Matthews and Charles Aitken. The film was produced by Jason Blum through his Blumhouse Productions banner. The film is also in association with Digital Riot Media and Vesuvius Productions. It follows a college student who is murdered on her birthday and begins reliving the day repeatedly, at which point she sets out to find the killer and stop her death.

After a night of drunken partying, university student Theresa “Tree” Gelbman wakes up on her birthday to the changed tune of “happy birthday” in the dorm room of classmate Carter Davis. he ignores a phone call from her father and dismisses Carter, returning to her room. Her sorority housemate Lori Spengler gives her a cupcake, which she throws away. Tree meets with her married professor, Gregory Butler, with whom she is having an affair. That night, on her way to a party, Tree is lured into a tunnel and murdered by a figure wearing a mask of the school mascot. Tree immediately wakes up back in Carter’s bed, and is unnerved to find the previous day’s events repeating themselves. Baffled, she relives the day, this time avoiding the tunnel and reaching the party. However, the masked killer follows her and murders her again. Tree again wakes up in Carter’s bed, realizes she is in a time loop, and barricades herself in her room to avoid death. The killer, already hiding inside, murders her a third time.

Waking up, Tree explains the events to Carter. He suggests taking advantage of the loop to identify her killer. She spends the next several iterations trailing people she considers suspects but she turns out to be wrong each time and is killed. After waking from a loop where she is bludgeoned, Tree faints and awakens in the campus hospital. Her body shows evidence of recovery from multiple traumatic injuries, indicating she has retained physical damage from her previous deaths. When the killer shows up, Tree escapes the hospital in Gregory’s car, only to be pursued and killed again, along with a cop who arrests her for speeding. She wakes up back Back in Carter’s bed, Tree convinces him of her predicament by demonstrating her knowledge of the day’s events. Tree admits to harboring tremendous self-loathing, particularly from pushing away her father after the death of her mother three years ago. Tree sees a local news report on John Tombs, a serial killer being held at the campus hospital.

Concluding that Tombs is her killer, Tree rushes to the hospital to warn of his escape. Tombs breaks free and nearly kills Tree, but Carter follows and rescues her. Tombs kills Carter before chasing Tree to a nearby bell tower, where she subdues him with a crowbar. Realizing that Carter will remain dead if she ends the loop, Tree hangs herself. Believing she has solved her murder, Tree proceeds happily through the day. She ends her affair with Dr. Butler and meets her father for lunch, where the two begin to reconcile. That night, she goes to the hospital and traps and kills Tombs. Relieved to finally be free, she celebrates her birthday in Carter’s room and eats the cupcake given to her by Lori. Tree wakes up still in the loop. Angry and confused, she returns to her room, where Lori offers her the cupcake again. Tree realizes the previous loop was the only time she had ever eaten the cupcake, and she had died in her sleep. Tree realizes Lori is her true killer. Lori had poisoned the cupcake, but when Tree failed to eat it, Lori utilized her job as a nurse at the hospital to frame Tombs for Tree’s murder.

Tree threatens to take the cupcake to the police, but Lori attacks her. Lori admits to also having an affair with Dr. Butler, whose preference for Tree drove Lori mad with jealousy. In the ensuing fight, Tree stuffs the poisoned cupcake in Lori’s mouth, then kicks her out a second-story window to her death. At a restaurant, Tree and Carter muse over the day’s events and he offers her his room for the night. The next day, Tree wakes up believing she is still in the time loop, but Carter quickly reveals he was just playing a prank on her, and it is really the next day at last. Tree is too relieved to be angry at him, and the two kiss.

It was way better than I expected. I didn’t know much about the movie before watching it and I was pleasantly surprised. It was funny and the lead actress is a hoot. She made me laugh. The beginning dialogues are all cliched and a bit boring but as the movie moves along it’s worth it. I will give it a 7.5 outta 10!

Grilled Chicken Pizza & Chicken Strips From Chai Kofi. Really, really good. Chicken Strips are KFC style tenders or chicken fingers. The pizza has plenty of chicken chunks on it. Slightly sweet from the peppers. A little spice may take it to the next level.