Arsenal have appointed Mikel Arteta as their new head coach on a three-and-a-half-year deal. Arteta leaves his role as Manchester City assistant manager and replaces Freddie Ljungberg, who took over as interim head coach following Unai Emery’s sacking at the end of November. “This is a huge honour,” said Arteta, whose coaching team has yet to be announced. “Arsenal is one of the biggest clubs in the world. We need to be competing for the top trophies in the game and that’s been made very clear to me in my discussions with (club owner) Stan and (director) Josh Kroenke, and the senior people from the club.

Ljungberg oversaw two draws, two defeats and one victory during his time in temporary charge, and departs his role with Arsenal 10th in the Premier League table. Arteta returns to the club for whom he played 150 games between 2011 and 2016, winning two FA Cups and two Community Shields in the process. City and Pep Guardiola were intent on Arteta remaining at the Etihad Stadium, but the offer from the Gunners proved too enticing for their former midfielder to turn down. The domestic treble winners were angered by Arsenal’s approach for the Spaniard after pictures emerged of Gunners chief executive Vinai Venkatesham and lawyer Huss Fahmy leaving his Manchester home in the early hours of Monday morning.

The Gunners lie 10th in the Premier League table, trailing the top four places by seven points with just 17 games gone. First up for Arteta is a trip to his other former Premier League side Everton, who have also recently sacked manager Marco Silva. Duncan Ferguson is in temporary charge for the game against the Gunners, with Carlo Ancelotti looking likely to take over on a permanent basis. 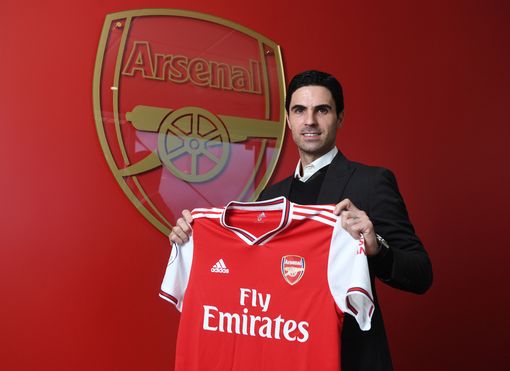 Mikel Arteta is to be the next head coach of Arsenal. His official unveiling is only hours away. It has been a hectic week for the Gunners that began with a meeting at the Spaniard’s house in the early hours of Monday morning following a 3-0 defeat to Manchester City last weekend. Everton are up next for the north Londoners, with Freddie Ljungberg preparing to lead the team out for one last game as interim head coach before Arteta takes the reins. The Spaniard will be in the stands for the match against the Toffees, along with Carlo Ancelotti – the Italian is set to be installed as manager at Gooidson Park with Duncan Ferguson in charge against Arsenal.

Every transfer window brings with it new rumours of an exit for Mesut Ozil but after an apparent breakdown in relations between the player and the club over his criticism of China the intrigue around Fenerbahce has increased. The Turkish Super Lig side have long been linked with the 31-year-old and according to Fotomac a loan deal could be on the cards in January. One player who is expected to play a key role for the new Arsenal head coach is midfielder Lucas Torreira. The Uruguayan won over fans in his first season at the Emirates Stadium by adding some much needed tenacity in midfield to chase down opponents and protect the back line.

Phil Babb highlighted the importance of his role for the Gunners if Arteta is to try and bring in what he learned at City at London Colney, with Fernandinho a key cog in Guardiola’s machine. With the Brazilian trusted to sit back and prevent the opposition from blowing the Premier League champions away on the counter-attack, he frees up the likes of David Silva and Kevin De Bruyne to roam forward. It is this role, as the safety net behind the more advanced midfielders and in front of the defence, that Torreira has been tipped to fill.

In a poll conducted by football.london, Arsenal supporters have named the three positions that need attention in the transfer market and the three players they think Arteta needs to fill them. RB Leipzig defender Dayot Upamecano, Leicester City midfielder Wilfred Ndidi and Crystal Palace winger Wilfried Zaha are among the names picked out by fans to fix issues in the squad.