Central defender Gabriel has joined us from French side Lille on a long-term contract. The 22-year-old Brazilian has completed his move and will wear our number 6 shirt. Gabriel, whose full name is Gabriel dos Santos Magalhaes, started his career in Brazil with Avai FC, before joining Lille in January 2017. During his time in France, Gabriel spent time on loan with Troyes in France and latterly in Croatia with Dinamo Zagreb. On returning from his loan spells, the Sao Paulo-born defender became a regular in the Lille side, helping them to a fourth-placed Ligue 1 finish last season and starting all six of their Champions League group-stage matches.

Technical director Edu said: “We are delighted to have signed Gabriel. He is a player we have been studying for a while and he was in demand from many clubs, so we are proud to have agreed and completed this transfer with Lille and the player. Gabriel is a player of high quality and Mikel and his coaches are looking forward to integrating him into the club.” Mikel Arteta said: “We welcome Gabriel to Arsenal. He has many qualities which will make us stronger as a defensive unit and as a team. He has proved with Lille that he is a defender with many outstanding attributes and we are looking forward to watching him grow as an Arsenal player.”

Gabriel was born in the Pirituba District of São Paulo. At age 13, Gabriel took a 12-hour bus ride to Florianopolis to begin his career at Avaí but returned to São Paulo after a week due to homesickness. However, Gabriel reconsidered his decision and returned to Avaí after two weeks, eventually going on to earn his first professional contract at age 16. He went on to be part of the team that won promotion to Brasileiro Série A in 2017. On 31 January 2017, Gabriel joined Ligue 1 side Lille, signing a four and a half year contract. When he arrived, Gabriel taught himself French and went on to conduct most of his interviews in the language. After playing several matches for Lille B, he was loaned to Troyes and Dinamo Zagreb, where he made just one league appearance for each club’s senior team. Gabriel returned to Lille in 2018, starting his first match on 10 February 2019 against relegation-threatened Guingamp in a 2–0 win. He went on to make 14 appearances over the course of the season, scoring his first goal for Lille in a 5–1 win against Paris Saint-Germain on 14 April 2019.

The following season, Gabriel began to play more regularly, forming a centre-back partnership with José Fonte. Gabriel was a starter in all six of Lille’s Champions League group stage matches. Gabriel represented Brazil at under-20 level at the 2017 South American U-20 Championship. Gabriel was scheduled to be part of Brazil’s under-23 national team at the 2020 Summer Olympics; however, the event was cancelled as a result of the COVID-19 pandemic. Gabriel is a left-footed centre-back who normally plays on the left side of a centre-back partnership. However, Gabriel can also play as part of a back three. Despite his height, Gabriel is known for being pacey. Christophe Galtier spoke about Gabriel, saying “He has a lot of character for a 22-year-old boy. Despite his ninety meters, he is super fast and covers his side well. He is the player who has won the most aerial duels in the first part of the season. 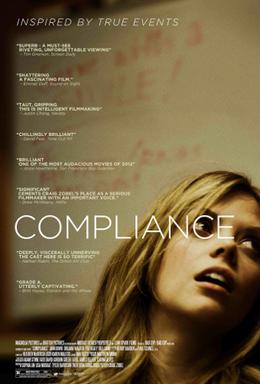 Compliance is a 2012 American thriller film written and directed by Craig Zobel, based upon a strip search phone call scam that took place in Mount Washington, Kentucky, in which the caller, posing as a police officer, convinced a restaurant manager to carry out unlawful and intrusive procedures on an employee. It stars Ann Dowd, Dreama Walker, Pat Healy, and Bill Camp.It had its world premiere at the Sundance Film Festival on January 21, 2012.

It was released on August 17, 2012, by Magnolia Pictures. Dowd’s performance as Sandra, the manager, won the National Board of Review Award for Best Supporting Actress.

Sandra, manager of a ChickWich fast food restaurant, receives a call from someone identifying himself as Officer Daniels. He claims to be in contact with the regional manager about a customer who had money allegedly stolen by an employee that day. Daniels claims that he is searching the suspect’s residence, but will remain on the phone while Sandra detains the employee until the police arrive. Sandra identifies Becky as the suspect based on the description; Daniels confirms the name.

Sandra brings Becky to the restaurant office with another employee, Marti. She denies the theft. At Daniels’ behest, Sandra searches Becky’s pockets and purse and finds nothing. Telling her that the alternative is to have Becky go to jail, Daniels has her strip-search Becky. Daniels tells Sandra that he and other officers are searching Becky’s home on suspicion that her brother is involved in drugs, and that Becky may be involved. He has Sandra put Becky’s clothes into a bag and take it to her car for inspection by the police.

Sandra insists she resume managing the restaurant as it is busy. After Daniels stipulates that a male employee watch Becky for “security reasons”, another employee, Kevin, is brought in, but questions Daniels’ instructions and leaves. Sandra’s fiancé Van takes over; under pressure from Daniels over the beers he drank before driving to the restaurant, he has Becky perform nude jumping jacks to “shake loose” any contraband concealed in her body. After Becky protests, Daniels has Van spank her. Eventually, Becky is coerced into performing oral sex on Van. Van leaves with guilt and is replaced by the custodian, Harold, who is outraged by Daniels’ instructions. Harold tells Sandra about Daniels’ orders; she calls the regional manager, who tells her he has no idea about any investigation.

The police discover that a similar incident happened elsewhere. Daniels is identified by closed circuit recordings and arrested; he is a family man working as a telemarketer. Becky meets an attorney to discuss options for suing Sandra. Sandra, now unemployed and no longer seeing Van, tells a journalist she is a blameless victim.

This is a really good movie and it made me feel sorry for both Becky and Sandra. The empathy factor is amped up as I really felt bad for them. Acting wise I think the main cast did an awesome job. I will give this movie an 8.5!