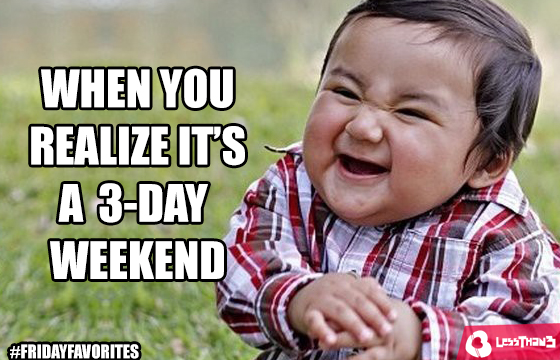 It’s a 3 day weekend once again. Woo-hoo! So happy that it has come at such a deserving time when my department has had such a busy 3.5 months with so many new people joining and we have to conduct their training and also sort out so much other stuff for them. Plus there are the reports and all such nonsense that goes hand in hand with working for a MNC in India and calls and meetings and such.

So it’s a perfect time to chill and relax and sit back. Drink a beer or 5. Actually tonight I’m just having a Pepsi and maybe on Sunday I might have some rum & coke or a beer. I am ordering in some southern style fried chicken from a new joint that has opened up nearby, a combo bucket with 9 piece chicken, some buns, fries and garlic sauce. I’m watching a bunch of Youtube videos at the same time. Once dinner is done, I will settle back and watch a movie (haven’t picked one out yet but I have quite a few that I can choose from and wanna watch this weekend). No football today as Arsenal is playing tomorrow night.

Sunday & Monday is open for me, only things sure is that I will watch a few movies and also a lot of Youtube and music.

Arsenal boss Mikel Arteta said there is more to come from “fantastic” Thomas Partey after the midfielder’s superb full debut in the 2-1 Europa League win at Rapid Vienna. David Luiz and Pierre-Emerick Aubameyang scored two goals in five second-half minutes after a Bernd Leno mistake had gifted Taxiarchis Fountas the opener to ensure the Gunners began Group B with a victory. But it was the performance of £45m deadline day signing Partey that stood out. The former Atletico Madrid player was a calm presence in midfield, breaking down attacks and building play with apparently effortless ease.

It was only Partey’s second appearance in an Arsenal shirt after a late cameo in the 1-0 defeat by Manchester City in the Premier League at the weekend, and Arteta is excited by what is to come from the Ghana international. For a long time in this game, the performance of Partey was the only highlight. The midfielder oozed class, breaking up play with well-timed tackles, getting the ball forward with calm and accurate passes and being alert to any danger posed by the hosts. Partey made a particularly crucial intervention in the first half when he prodded the ball from under the feet of Fountas as the Rapid Vienna forward was about to shoot.

After a tight first half in which chances were few and far between, the hosts took the lead after a big error by Leno. The goalkeeper’s attempted pass was intercepted by Fountas, who then fired home from a tight angle. Another error by Leno almost gifted the Austrians a second when he hit a clearance straight at Fountas, but he was able to recover and parry the striker’s effort. Arsenal lacked quality in the final third as they struggled to open up the hosts but found their bite when Aubameyang came off the bench. Luiz put Arsenal level when he headed in Nicolas Pepe’s free-kick and Aubameyang secured the win when he tapped in from Hector Bellerin’s excellent assist. Leno still looked nervous dealing with passes back to him and another poor clearance hit Luiz and deflected to Fountas, but this time Rapid Vienna’s top scorer could not capitalise.