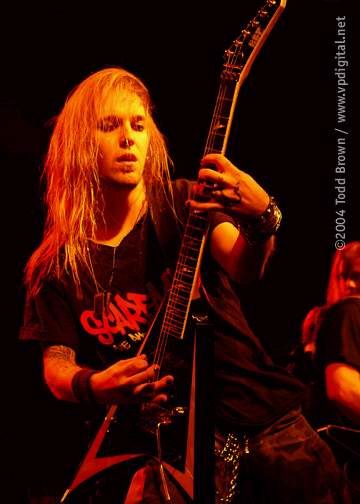 Former Children Of Bodom singer and guitarist Alexi Laiho has died. According to his label, Naplam, the Finnish musician passed away at home in Heklsinki last week. Although no cause of death was specified, the 41-year-old had reportedly been suffering from what were described as “long term health issues”. Laiho founded Children Of Bodom in 1993, and led them until they split up at the end of 2019. In 2020, he formed a new band, Bodom After Midnight. Laiho received widespread acclaim for his guitar work.

In 2004 he was ranked #96 out of 100 Greatest Heavy Metal Guitarists of All Time by Guitar World. Guitar World magazine has also ranked him as one of the 50 fastest guitarists in the world. In addition, Roadrunner Records ranked Laiho at #41 out of 50 of The Greatest Metal Frontmen of All Time. Furthermore, Total Guitar conducted a public voting poll to determine the greatest metal guitarist of all time; Laiho was voted #1 out of 20 metal guitarists, with over 20% of the vote.

Laiho started playing violin at the age of seven and guitar at the age of 11 and in 1993 formed Children of Bodom together with drummer Jaska Raatikainen under the name of Inearthed. In 2004, Laiho founded a side-project called Kylähullut, which was assembled together with Tonmi Lillman (ex-Sinergy) and Vesa Jokinen 69er (from Klamydia). The band was created merely for the entertainment of the musicians, and takes a carefree approach to their music. The band’s discography includes two EP’s, and two full-length albums. Laiho has been featured on the cover of Young Guitar Magazine several times, as well as being on the cover of Guitar World along with master guitarists Steve Vai and Zakk Wylde. The “Wildchild” nickname is derived from the song “Wild Child” by the band W.A.S.P. He also has a clothing line called “wild child industries”.

In February 2002, Laiho married Kim Goss during a private ceremony in Finland. Prior to the marriage, they dated for four years. In 2004 they separated, but still remain close friends. For several years after he was then with Kristen Mulderig, manager of Slayer until mid 2015. Later that same year he began a relationship with Kelli Wright, an Australian Public Relations Manager who he became engaged to September 2016 and the two married December 2017 in a private ceremony in Australia.

On 15 December 2019 Children of Bodom played their last show at the Icehall in Helsinki, dubbed “A Chapter Called Children of Bodom.” This followed the announcement in November that after this show, all members of the band except Laiho and guitarist Daniel Freyberg had quit. Following their departure, it was revealed that due to legal reasons, Laiho would need permission from his former band mates to continue using the Children of Bodom name. In March 2020, Laiho and Freyberg officially announced their new band, Bodom After Midnight, named after the second track from the album Follow the Reaper. This officially marked the end of Children of Bodom. Actress Tanya Roberts has died. Best known for her roles as a Bond girl and on That ’70s Show, Roberts died Sunday after a brief hospitalization. She was 65. The actress reportedly took her dogs for a walk on Christmas Eve, and collapsed upon returning home, according to TMZ. She was put on a ventilator after being hospitalized, but never recovered. The outlet reports that the actress did not appear to be ill in the days leading up to her collapse, and that her death is not related to COVID-19. However, additional information was not available.

Born Victoria Leigh Blum, she changed her stage name to Tanya Roberts. . She was best known for playing Stacey Sutton in the James Bond film A View to a Kill (1985) and Midge Pinciotti on That ’70s Show (1998–2004). Roberts was born in 1955 in the Bronx, New York City, the second child of her father, of Irish descent, and a Jewish mother. She relocated from New York with her mother to live in Toronto for several years, where she started formulating a photo portfolio and laying plans for a modeling career. Her career began as a model in TV ads for Excedrin, Ultra Brite, Clairol, and Cool Ray sunglasses. She played serious roles in the off-Broadway productions Picnic and Antigone.  She also supported herself as an Arthur Murray dance instructor. She met & later married  psychology student Barry Roberts. Her film debut was the horror film Forced Entry (1975). This was followed by the comedy film The Yum-Yum Girls (1976).

In 1977, as her husband was securing his own screenwriting career, the couple moved to Hollywood. The following year, Roberts participated in the drama Fingers. In 1979 Roberts appeared in the cult movie Tourist Trap, and also in Racquet, and California Dreaming. Roberts was featured in several television pilots that were not picked up: Zuma Beach (a 1978 comedy), Pleasure Cove (1979), and Waikiki (1980). Roberts was chosen in the summer of 1980 from some 2,000 candidates to replace Shelley Hack in the fifth season of the detective television series Charlie’s Angels on ABC. Roberts played Julie Rogers, a streetwise fighter who used her fists more than her gun. Producers hoped Roberts’ presence would revitalize the series’ declining ratings and regenerate media interest in the series. Before the season’s premiere, Roberts was featured on the cover of People magazine with a headline asking if Roberts would be able to save the declining series from cancellation.

Roberts played Kiri in the adventure fantasy film The Beastmaster (1982), which included a topless swimming scene. She was featured in a nude pictorial in Playboy to help promote the movie, appearing on that issue’s October 1982 cover. In 1983, Roberts filmed the Italian-made adventure fantasy film Hearts and Armour. She portrayed Velda, a buxom secretary to private detective Mike Hammer, in the television movie Murder Me, Murder You (1983). The two-part pilot spawned the syndicated television series Mickey Spillane’s Mike Hammer. She declined to continue the role in the Mike Hammer series to work on her next project, Sheena: Queen of the Jungle (1984). The movie was a box office and critical disaster, garnering her a nomination for “Worst Actress” at the Razzie Awards.

Roberts was married to husband Barry Roberts from 1974 until his death in 2006. They had no children. Roberts resided in Hollywood Hills, California.